A proposal to raise the wages of workers in and around Seattle-Tacoma International Airport has drawn national attention — and big cash is starting to follow. Just 11,852 registered voters in the city of SeaTac are eligible to vote Nov. 5 on an initiative that sets a $15-hour minimum wage for thousands of airport, hotel, car rental, and other employees. Supporters and opponents of the measure already have raised $440,000 combined for the looming battle — about $37 per voter. Common Sense Sea Tac, a business-funded political-action committee seeking to defeat the union-backed measure, has raised more than $243,000, according to reports filed with the state Public Disclosure Commission. That includes $75,000 from the American Car Rental Association, $50,000 from a PAC representing state hotel owners, and $15,000 each from Alaska Airlines and the Washington Restaurant Association. Seattle Times, 8-22-13.

Mercer Island City Councilwoman Tana Senn has emerged as a strong favorite to take the legislative seat of ex-State Rep. Marcie Maxwell (D-41), who resigned to become a top adviser on education to Gov. Jay Inslee. Senn won the support of 41st District Democrats before a packed house at Eastshore Unitarian Church in Bellevue Wednesday, beating out strong rivals David Ellis and George Pieper.  Pieper is CEO of OutSmart Office Solutions, and a longtime Democratic activist. Ellis was an organizer of the 2012 Washington United for Marriage campaign. All three names will go to the King County Council, which will tap a successor to Maxwell in the state House of Representatives.  Ellis and Pieper have promised to support Senn. Seattle P-I, 8-22-13.

The city has been clear: In less than two weeks, Nickelsville’s 175 residents are supposed to leave their homeless encampment in a West Seattle field or be evicted. That was the decision made back in June, when the Seattle City Council directed Mayor Mike McGinn to kick all squatters off the city-owned property, where they’ve been camping illegally since May 2011. Posted on a utility pole out front, a sign warns campers: “NOTICE OF ENCAMPMENT CLOSURE: This site will be closed to shelter and storage effective 9/1/2013.” But instead of residents fleeing, pilgrims are arriving every week. It’s getting bigger. So what’s going to happen? The Stranger, 8-21-13.

Foreclosed, but not forlorn

Activists put up a sign in front of Jermy Griffin’s South Park home in May 2013.

For Jeremy Griffin, eviction is only the beginning. A group of activists inspired by Occupy Wall Street helped a man move back into the South Park home from which he was evicted for just two days before the Seattle Police Department moved him out again. Members of the Standing Against Foreclosure and Eviction (SAFE) attempted to negotiate with banks to keep Jeremy Griffin in his home, and staged protests to stop what they see as an unfair foreclosure on someone who is ready and able re-buy his home. On July 31, King County Sheriff’s officers led handcuffed protesters off Jeremy Griffin’s property. Members of SAFE helped Griffin back into his home Aug. 14, even though a locksmith had already changed the locks. Griffin declined to say how he got back in. “Someone came and changed the locks, and I now have keys to the locks,” Griffin said with a smile. Real Change, 8-21-13.

Schools? Legislators trying to get their story straight

After two hours in a closed-door meeting Wednesday, a bipartisan legislative committee could not decide on what to tell the Washington Supreme Court about how well the statehouse is complying with the McCleary ruling on fixing K-12 education. Everyone agrees on the basic facts and figures. But a special committee’s Republicans and Democrats disagree how to put that information in context to the Supreme Court. The eight-legislator committee — two House Republicans, two Senate Republicans, two House Democrats, and two Senate Democrats — failed to agree Wednesday during a meeting in Burien on how to frame the basic figures in a larger picture for the court. Both sides hope to reach an agreement by next week. Crosscut, 8-22-13.

Any public health district in Washington that provides maternity care must continue to offer “substantially equivalent benefits” in the form of contraception and abortion services, even if it contracts with a religious-affiliated medical organization, state Attorney General Bob Ferguson said in an opinion Wednesday. “I fully expect all public hospital districts to comply with this opinion,” Ferguson told a Seattle news conference. The opinion impacts a growing trend in Washington, in which small local hospitals have chosen to affiliate with larger health organizations, including Catholic-affiliated PeaceHealth and Providence Health and Services. Under a directive by the U.S. Conference of Catholic Bishops, church-affiliated hospitals cannot perform abortions, are restricted in contraceptive services and cannot assist in patient suicides. Seattle P-I, 8-21-13. 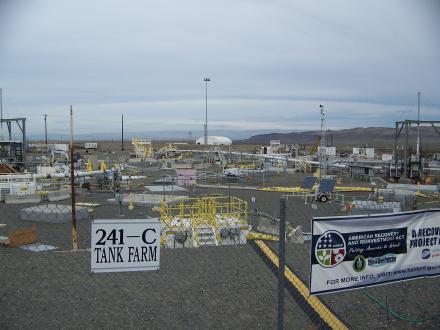 The 241-C tank farm at the Hanford Nuclear Reservation

Crews at the Hanford Nuclear Reservation are investigating increased radiological readings at a tank farm there. Part of the massive site was shut down following the reading Wednesday night. It happened around 9:30 p.m. while crews were transferring waste at a tank inside what’s known as the C-Farm, a 9-acre grouping of underground tanks that hold millions of gallons of radioactive sludge. Operators noticed a big difference in their radiological readings and proceeded to evacuate the entire farm area. Gates were closed to most workers, and areas of Hanford were placed under a “take-cover” status. Special crews surveyed the areas outside of the C-Farm, then got closer to the location where work was being done. Crews have since given the all-clear for most of the farm, but are working on narrowing down where the high reading came from. KPLU, 8-22-13.

The Department of Justice said Thursday that it plans to sue Texas over its voter ID law, and will intervene in the ongoing case over the state’s redistricting laws. “Today’s action marks another step forward in the Justice Department’s continuing effort to protect the voting rights of all eligible Americans,” Attorney General Eric Holder said in a written release. “The Department will take action against jurisdictions that attempt to hinder access to the ballot box, no matter where it occurs.” It’s the second time this summer that the federal government has singled out Texas in a lawsuit seeking to protect voter rights. Predictably, Gov. Rick Perry denounced “this administration’s blatant disregard for the 10th Amendment.” He pledged that the state would vigorously defend its laws. Sen. John Cornyn (R-TX) denounced the Justice Department’s lawsuit, calling it an attack on “the sovereign affairs of Texas and a lame-duck administration trying to turn our state blue.” Dallas Morning News, 8-22-13.

Colin Powell spoke out forcefully Thursday against a sweeping new voting law in North Carolina, arguing that Republicans should be courting minority voters rather than driving them away from the polls. “I want to see policies that encourage every American to vote, not make it more difficult to vote,” the former secretary of state said in a speech at Raleigh, N.C., according to the News & Observer. Powell added, “It immediately turns off a voting bloc the Republican Party needs. These kinds of actions do not build on the base. It just turns people away.” Powell’s remarks were even more notable given North Carolina Gov. Pat McCrory’s (R) presence at the CEO Forum in Raleigh. The law, slated to take effect in 2016, will require government-issued photo IDs at the polls while shortening the early voting period in the state. Democrats and groups such as the NAACP and the ACLU have criticized the law for its punitive effects on minority and young voters. McCrory spoke before Powell at the event. Talking Points Memo, 8-22-13.

Arizona has lost another battle in its ongoing war to restrict abortions, adding to a growing list of defeats this year for the state’s anti-abortion movement. On Thursday, the 9th U.S. Circuit Court of Appeals ruled that Arizona cannot strip Medicaid funding from doctors and clinics that perform abortions, upholding a lower-court ruling. House Bill 2800, which the Legislature passed and Gov. Jan Brewer signed in 2012, would have halted Medicaid reimbursements for contraceptives, cancer screenings, treatment for sexually transmitted diseases, and annual women’s exams at the state’s more than 80 hospitals and clinics that also perform abortions. It is already a violation of state law to spend state or federal money on elective abortions, and that prohibition was not disputed in this case. Arizona Republic, 8-22-13.

Filner to resign as San Diego mayor over sexual harassment

Mayor Bob Filner will resign from office as part of a mediation deal reached in his sexual harassment lawsuit, sources familiar with the negotiations said Thursday. Filner’s decision to resign comes after three days of closed-door mediation and after six weeks of scandal in the city. At least 18 women have publicly accused Filner of sexual harassment, including one former aide who filed the lawsuit. In exchange for his resignation, the city will pay some, if not all, of Filner’s share of any damages awarded in the lawsuit, said the sources, who spoke on the condition anonymity because they were not authorized to speak publicly. The City Council is set to vote on the settlement in a closed session Friday. Los Angeles Times, 8-22-13.

The Internal Revenue Service was unable to suppress a lawsuit over its failure to audit thousand of churches that allegedly violated federal tax law by engaging in partisan advocacy. U.S. District Judge Lynn Adelman of the Western District of Wisconsin Monday denied a motion to dismiss a lawsuit brought by the Freedom From Religion Foundation against the IRS. “If it is true that the IRS has a policy of not enforcing the prohibition on campaigning against religious organizations, then the IRS is conferring a benefit on religious organizations (the ability to participate in political campaigns) that it denies to all other 501(c)(3) organizations, including the Foundation,” Adelman wrote. The Internal Revenue Code prohibits tax-exempt 501(c)(3) organizations, including churches, from intervening or participating in political campaigns on behalf of or in opposition to any candidate. But many churches have openly defied the ban without consequences. Raw Story, 5-20-13.

The GOP may have outfoxed itself on the voting rights issue. Having maneuvered for years to achieve their dream of a conservative U.S. Supreme Court, they were thrilled with the SCOTUS decision in June that seemed to gut enforcement of the Voting Rights Act. They probably didn’t anticipate that the Democratic Party would be spurred to find a solution, and fast — a fact they might have tuned into were they not so allergic to the word “solutions.” Last week, a 50-state initiative was rolled out by a new nonprofit organization run by Michael Sargeant, the executive director of the Democratic Legislative Campaign Committee. The group takes back language co-opted by conservatives, naming itself American Values First. The intent of the group is to push voting reforms that will make it a whole lot easier for all who are eligible to vote. First of all, Democrats will push states to adopt legislation that requires all elections to be conducted by mail.Colorado finalized such a law early this year. Washington and Oregon already hold all-mail elections. Secondly, Dems will push for states to enact universal registration, putting the responsibility for registration on state governments — for instance, by tying automatic registration of eligible voters to issuing drivers’ licenses. Addicting Info, 8-21-13.