Westneat: The Seattle Times does not have it in for McGinn

Can I at least try to put to rest this idea that McGinn is under some orchestrated attack? In my nearly 10 years writing a column here, neither the publisher, Frank Blethen, nor any other boss has ever requested that I write on anything specific (including this column). Nor has the publisher stopped me from writing anything, or complained to me about what I wrote (including when I opposed an estate-tax initiative the newspaper contributed money to). The result, for better or worse, is a newspaper with competing voices. Danny Westneat, Seattle Times, 8-25-13.

Former KIRO-TV anchor Susan Hutchison has been elected as the new chair of the Washington State Republican Party. At a meeting in Spokane Saturday afternoon, Hutchison defeated the sitting interim GOP chair, Luanne Van Werven, in a runoff vote after two other contenders were eliminated. (The final vote on the GOP state committee was Hutchison 59, Van Werven 46.) Hutchison ran for King County Executive in 2009 by downplaying her Republican ties. But she was in full partisan fervor Saturday, pledging to breathe new life into a state Republican Party that has suffered stinging election defeats. (Lying about Democrats being “masters of election fraud” isn’t “breathing new life” into anything.) Seattle Times, 8-24-13.

Jamie Alonso, left, of Olympia and son Joaquin, 9, along with Melissa Walter and her daughter, Rainier High senior Brandy, 18, get information about health insurance from Sea Mar receptionist Sylvia Moore, foreground and volunteer Elsie Estevez at the Sea Mar clinic in Lacey on Friday. In addition to helping her 18-year-old daughter, Walter was also looking into insurance options for her 21-year-old son. “Whether or not it’s mandatory, knowing where to go for affordable health care is important,” she said.

The launch of Washington’s grand experiment with a health insurance exchange is just over a month away. Oct. 1 is when signup for coverage begins formally for individuals and families that lack coverage. Under the Affordable Care Act, nearly everyone is required to have insurance for 2014 to avoid tax penalties. State experts say 80 percent of Washingtonians won’t be affected by the federal reform, also known as Obamacare. That’s because most Washingtonians are already covered by employer-based private insurance, federal military coverage, Medicare for retirees, Medicaid for the poor, or some other option. Still, “There’s a number of people for whom it’s going to be worth going to the Healthplanfinder site and see what is available,” said Michael Marchand, communications director for the Washington Health Benefit Exchange. Olympian, 8-24-13.

Seattle’s seven School Board members put up with all kinds of misery, all as volunteers and usually with no political experience or aspirations. State Rep. Reuven Carlyle (D-36) is trying to improve the job by proposing members be paid what state legislators are, about $42,000 annually. Right now, they are eligible for $4,800 a year in reimbursements and per diems. The details of the legislation are still being worked out, but Carlyle said board members or a salary commission could decide which boards would be paid. The pay could be based on district size or other factors. Seattle Times, 8-24-13.

In an effort to expand the debate over comprehensive immigration reform beyond politics, a group of religious, business, and government leaders joined Saturday to unveil a shared set of values to personalize the discussion.“We need more people talking this through from their vantage point and station in the” Yakima Valley, said Yakima Diocese Bishop Joseph Tyson in a telephone interview. “We can’t abandon this issue only to elected officials in public life.” The principles were originally laid out in February in Tyson’s speech in Yakima to the Washington Farm Labor Association, but the names of those involved in shaping them weren’t formally unveiled until Saturday at an event at Heritage University. In February, they were seen as the bishop’s own take on the issue, but Tyson said that he had been working even then with the signatories to draft the message he delivered at the time. Yakima Herald-Republic, 8-25-13.

Opponents of two proposed charter changes for Spokane won their fight to keep the initiatives away from voters when Superior Court Judge Maryann Moreno Friday barred them from the November ballot. Cue the huge sighs of relief from the home builders and various nice-sounding organizations fronting for local businesses. The groups insisted the two proposals were illegal and “if enacted they would have cause serious harm to Spokane and our economy,” Michael Cathcart, government affairs director for the home builders said shortly after Moreno ruled. An appeal is possible, so this might be hashed out for months. But if anything is certain about initiatives it is their very uncertainty. Dire predictions by opponents of what a particular ballot measure will do are almost always off target. Jim Camden, Spokesman-Review, 8-24-13.

Only in the state that started the Civil War would Graham be called liberal; Senator has multiple challenges from right 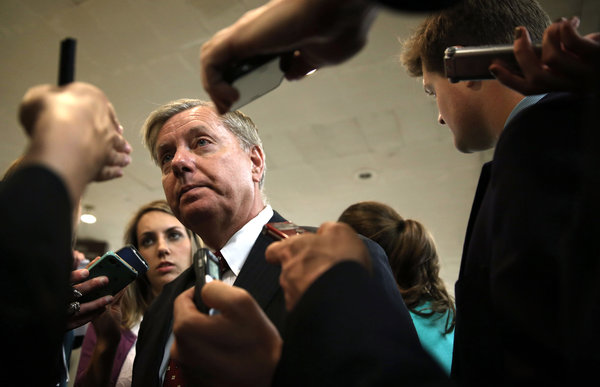 Senator Lindsey Graham, shown in Washington this summer, has been criticized by some Republicans and targeted by Tea Party supporters.

Some of the early shots in the Republican primary battle against Senator Lindsey Graham have been fired from this tiny community on the northern border of the state where the Civil War began. Conservatives in South Carolina are eager to oust Mr. Graham, who has enraged the far right for, among other things, reaching across the aisle on immigration and supporting President Obama’s nominations for the Supreme Court. Tea Party supporters called him a community organizer for the Muslim Brotherhood when, instead of heading home for the Congressional break, he went to Egypt at the request of the president. New York Times, 8-25-13.

The attorney general hinted last week that more lawsuits are on the way.

Whatever President Barack Obama says at the March on Washington ceremony on Wednesday, his administration has already sent a loud message of its own: ramping up its push on voting rights by way of a risky strategy — and pledging more tough moves to come. The backdrop for the big event is a surge in voter ID laws and other restrictive election measures, and the legal fight the Obama administration has picked with Texas to stop the wave. It’s suing to block the state’s voter ID law from taking effect, a clear signal to other states to think twice before they pass any more restrictions on voting rights. The problem is, even those who agree with the administration say there’s no guarantee that it can actually win a lawsuit with the Voting Rights Act tools it has left. Politico, 8-26-13.

Nine fired workers and a current employee were arrested around 2:30 pm Thursday after locking arms and sitting in front of the entrance to a Washington, DC, Walmart office. The planned act of civil disobedience concluded a noon rally at which workers announced a Labor Day deadline for Walmart to raise wages and reinstate workers they allege were fired for their activism. Twenty workers who joined a June strike by the labor group OUR Walmart have since been terminated; another fifty-some have been otherwise disciplined by Walmart. The Nation, 8-22-13.

Marchers carry signs in remembrance of Trayvon Martin during the 50th anniversary commemoration of the March on Washington August 24, 2013.

I spent eight hours today among thousands at the March on Washington, and the people present were some of the most remarkable, resilient people I have ever had the privilege to be around. The number-one face on T-shirts, placards, and even homemade drawings was not President Obama or even Dr. Martin Luther King Jr. It was Trayvon Martin. I also witnessed homemade signs calling for jobs programs, speaking out against the school closures and in solidarity with those overseas victimized by US militarism. The people at this march are the face of resistance to what Dr. King called the “evil triplets of militarism, materialism and racism.” The main speakers at the march, however, did not match the politics and urgency of those who gathered in the Saturday heat. Dave Zirin, The Nation, 8-24-13.