(Daily Clips will not publish Monday, June 17 or Tuesday, June 18, so that the editor can take some family time.)

Bill before County Council would bar some ICE holds

King County Council member Larry Gossett has introduced a measure that orders authorities not to honor federal jail holds of some immigrants suspected of being in the country illegally. The proposed county measure does not apply to people in jail with records of violent, serious, or sex crimes. The exemption also applies for people who have four or more serious traffic offenses, such as drunken driving. Gossett says it’s time the county has a clear position on immigration holds, but also to align practice with U.S. Immigration and Customs Enforcement’s stated goals of focusing on immigrants with criminal records. ICE has said their jail programs targets immigrants who have committed crimes. Associated Press (Tacoma News Tribune), 6-13-13. Currently, when people are booked into King County jail, their fingerprints are automatically shared with federal authorities. If the person is suspected of being in the country illegally, immigration officials ask the jail to hold the individual. A recent University of Washington study found these holds cost the county nearly $2 million dollars a year. KUOW, 6-13-13. More background from Kirkland Reporter, 5-30-13. 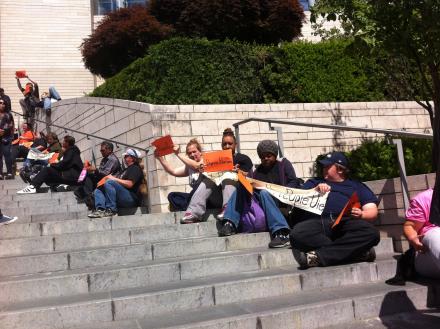 Nickelsville residents and their supporters protest lack of shelter and housing options with a “die-in” at City Hall.

Homeless residents of the Nickelsville tent city warn that closing down their camp will have dire consequences, while City Council members left the door open to keep the camp dwellers together. About 125 residents make their home at the West Marginal Way South site. Advocates told members of a City Council committee Wednesday that many of those tent dwellers will die on the streets if the city moves forward with threatened evictions September 1st. After public testimony before the committee, about 50 residents and supporters left the council chambers and staged what they called a “die-in” on the steps of City Hall. KPLU, 6-13-13. Meanwhile, the federal agency that works on solving homelessness has written a letter to Mayor Mike McGinn supporting the end of Nickelsville. The U.S. Interagency Council on Homelessness wrote Thursday that they oppose sanctioned encampments and don’t think letting homeless people camp outside serves homeless people well. Seattle Times, 6-13-13.

State Sen. Ed Murray (D-43) claimed childhood roots in Alki and took the votes of Democrats from West Seattle and beyond Wednesday night, capturing the sole endorsement of the 34th District’s Democratic organization over incumbent Seattle Mayor Mike McGinn.  Murray won by a better than 2-1 margin. It was a base-broadening win for Murray, who represents neighborhoods of Montlake, Capitol Hill, Fremont, the University District, and Wallingford in the State Legislature.  Murray has now won sole endorsements from his own 43rd District and shared a 46th District endorsement with Peter Steinbrueck. Seattle P-I, 6-13-13. Evidently McGinn was peved that Rep. Joe Fitzgibbon (D-34) endorsed Murray. Seattle Times, 6-13-13.

The Department of Natural Resources stated in its response to logger Kurt Erickson’s most recent application to log only on the top of Squak Mountain, that it “believes the landowner/applicant is an alter ego of other persons or entities that do own 500 acres within 50 miles of saltwater. The landowner/applicant claims it owns less than 500 acres within 50 miles of saltwater and thus is not subject to the critical habitat trigger for marbled murrelets. Therefore, more information is needed to assess the potential marbled murrelets habitat at the site.” Issaquah Reporter, 6-12-13. Gov. Jay Inslee said Thursday that he won’t lead Washington’s delegation to the Paris Air Show after all, because he’s decided he needs to focus his attention on the state’s budget stalemate. Inslee was to have arrived in Paris in time to attend at least part of the show, which runs from June 17 through 23. Instead, Inslee has asked Rep. Rick Larsen (D-2) to lead the delegation of 52 government, aerospace, and education leaders to Paris.  The Washington Legislature is now in its second special session after failing to reach a budget compromise. The governor is negotiating for a budget settlement and has begun planning contingencies in case a budget is not approved by June 30. That is the end of the current two-year budget cycle. Puget Sound Business Journal, 6-13-13.

A legislative fix to a court ruling on the estate tax was signed into law by Gov. Jay Inslee early Friday morning, hours before the state was to start issuing millions of dollars in refunds. Inslee signed the bill, joined by Democratic and Republican lawmakers from the House and Senate, shortly after the Senate approved the measure on a 30-19 vote just before midnight Thursday. The Senate vote came after a full day of negotiations following passage by the House Thursday morning. (Can’t wait to see what the Rs got in return, can you?) Associated Press (Tacoma News Tribune), 5-14-13.

A strike by Evergreen’s student-support services workers on May 27 left the campus Red Square vacant.

Members of a new labor union at Evergreen State College ratified their first-ever contract today with a 52-2 vote, according to the Washington Federation of State Employees. The federation is the umbrella organization for the more than 55-member Evergreen Student Support Services Staff Union, which went on strike for one day last month after failing to strike a deal after 17 months. the contract takes effect July 1 and runs two years for the new union representing academic and financial aid counselors, residence supervisors, and athletic coaches. The agreement includes a 3 percent pay raise on July 1 and another 1 percent raise on July 1, 2014, and it also includes yearly step pay increases once a worker has been on the job 12 years.Evergreen’s media office did not post or distribute a statement. Olympian, 6-13-13.

Thousands of part-time school employees and college instructors would be switched from state-funded health insurance to Affordable Care Act insurance exchanges under a complicated Senate budget proposal that its Republican backers say would save the state up to $57 million over the next two years. But so many different groups oppose the measure — including some of the state’s most powerful unions — that some think the Senate is using it as a bargaining chip in budget negotiations. Sen. Andy Hill (R-45), the Senate’s lead budget writer, originally proposed eliminating state-funded insurance for part-time employees in a bill, SB 5905. That language was later folded into the $33 billion budget that passed the Senate last weekend. For public-school employees, whose contracts are bargained every few years with local school districts, taking away the state insurance allocation would represent a cut, said Washington Education Association spokesman Rich Wood. “Some of the lowest-paid school employees” — including bus drivers and cafeteria workers — “would be losing their health care,” he said. Seattle Times, 6-13-13.

Op-ed: Taxpayers should beware of proposed change in workers’ comp

Members of the Senate Republican Majority Caucus want to alter the state’s worker compensation program through SB 5127. Their changes would do little to help the worker or the taxpayer. Currently, Washington allows settlements only for workers in their 50s and is somewhat unclear as to the breadth of the role that the Board of Industrial Insurance Appeals plays in reviewing these settlements to ensure workers are being treated fairly. Under this bill, voluntary structured settlements — cash settlements for future income support — could be offered to injured workers as young as 40 years old. Furthermore, it would prevent the Board of Industrial Insurance Appeals from reviewing settlements in which the workers are represented by lawyers to ensure they are settled in the workers’ “best interest.” These structured agreements, voluntary or otherwise, would put taxpayers at risk for the cost of long-term income support for these workers in the form of state and federal programs — such as food stamps and federal disability payments. Sen. Steve Conway (D-29), Bellingham Herald, 6-13-13.

Over his decades in public life, former Gov. Albert Rosellini helped bring Washington into the modern era, burnishing his reputation as one of the state’s most effective leaders by reforming state prisons, modernizing mental health institutions, and helping create the 520 floating bridge that links Seattle to its job-rich eastern suburbs. But FBI officials who scrutinized Rosellini’s activities in the 1960s saw something else. They questioned his political associations and probed a series of allegations that Rosellini, who died in 2011 at the age of 101, was corrupt. Rosellini was never charged with any crimes and was never the subject of an FBI criminal investigation, according to hundreds of pages of documents recently disclosed to  Associated Press under public records law. However, FBI officials did little to hide their disdain for the Democrat, with the Seattle special agent in charge writing to FBI Director J. Edgar Hoover that Rosellini was “a thorough scoundrel.” Associated Press (Tacoma News Tribune), 6-13-13.

The University of Washington geneticist who discovered the breast-cancer genes at the heart of the Supreme Court’s landmark decision said Thursday that she’s “as high as the flag on the Fourth of July.” “The Supreme Court ruling is splendid for patients, their families, their physicians, scientists and common sense,” Mary-Claire King wrote in an email. Other UW scientists echoed King’s elation that the practice of patenting human genes has come to an end. As soon as the ruling was issued, several companies announced the availability of new genetic screens that are cheaper than those produced by Myriad Genetics, the firm whose patents were at issue in the court case. Seattle Times, 6-13-13. 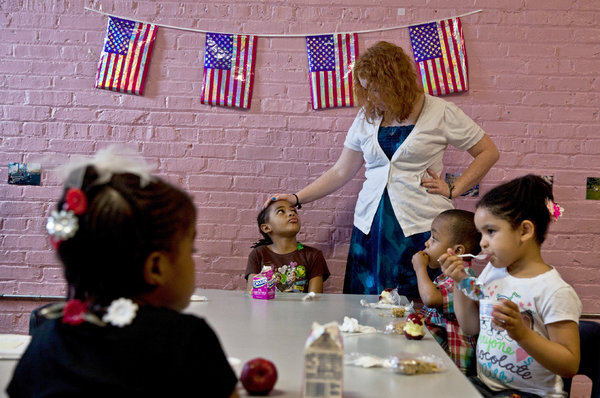 Amanda Lindsey, a preschool teacher at the Academy of St. Benedict the African in the Englewood neighborhood of Chicago, talked with Charlotte Pettigrew, 5, during breakfast there in May.

Starting this fall, under an expansion led by Mayor Rahm Emanuel, the number of Catholic schools in Chicago that receive taxpayer money for preschool will nearly double. Across the country, states and districts are increasingly funneling public funds to religious schools, private nursery schools, and a variety of community-based nonprofit organizations that conduct preschool classes. Now, as President Obama pushes a proposal to provide public preschool for all 4-year-olds from families with low or moderate incomes, his administration acknowledges that many children will attend classes outside the public schools. New York Times, 6-13-13.

Won’t hire convicted criminals? Uncle Sam might have a problem with that

If you’ve got a policy against hiring anyone with a criminal record, you better review guidelines issued by the Equal Employment Opportunity Commission. The EEOC this week sued BMW’s manufacturing plant in Spartanburg, S.C., and Dollar General, based in Goodlettsville, Tenn. The agency contends the companies’ policies against hiring people who have been convicted of a crime violate the Civil Rights Act because they disproportionately cost African-Americans jobs. EEOC’s lawsuit against Dollar General, which has 10,000 stores in 40 states, grew out of a discrimination lawsuit filed by two rejected black applicants. Dollar General also requires criminal background checks as a condition of employment, according to the EEOC. One of the rejected applicants had a 6-year-old drug conviction, but had previously worked at another discount retailer for for four years. The other rejected applicant was fired by Dollar General due to an inaccurate criminal background report. In both cases, the EEOC alleges the companies’ policies had a disparate impact against African-Americans. The agency is seeking back pay for the workers who lost their jobs and an injunction to prevent future discrimination. Puget Sound Business Journal, 6-12-13.

On Wednesday, Representative Trent Franks, a Republican from Arizona, made some odd comments while talking about rape and abortion: “The incidence of rape resulting in pregnancy are very low.” The first reaction had by many was that this just showed how little he and the rest of the GOP know about women’s bodies or women’s lives. The remark came as Franks argued for a bill that would ban all abortions after twenty weeks; he was objecting to an amendment that would have made an exception in cases of rape and incest. Why, if the incidence was really so low, would such an exception be a problem? Franks isn’t that dumb, really. Anti-abortion-rights groups and politicians have engaged in a concerted strategy to chip away at the right to choose, bit by bit, in practical ways. Amy Davidson, New Yorker, 6-13-13.