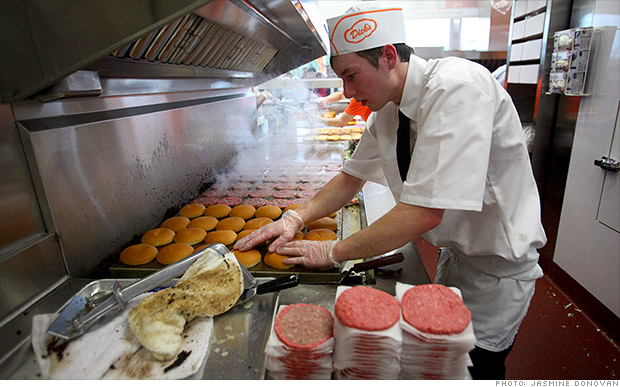 Seattle’s minimum wage hike will drive up the price of a burger from Dick’s Drive In.

Seattle has always craved national news recognition, whether it’s for architecture of the Seattle Downtown Library, or for radical politics that once caused Franklin D. Roosevelt’s political strategist James Farley to say there were “47 states in the Union and the Soviet republic of Washington.” The city’s bold jump to a $15-an-hour minimum wage is getting the kind of attention, from CNBC to the BBC,  that used to “put Seattle on the map” in the words of local booster.  And there’s a bit of unkind attention. Joel Connelly, Seattle P-I, 6-3-14. Whether other cities will emulate Seattle depends on several factors. The agreement came together with remarkable speed because Seattle Mayor Ed Murray appointed a committee of labor, business, and community leaders to hash things out on their own with a firm deadline. Should the group fail to negotiate a deal, the mayor said, he would put forward his own plan with features that would make both sides unhappy. The looming deadline for everyone was to head off a battle of ballot initiatives in the fall, which could have been both costly and bruising. Not every state has the type of binding ballot proposals that posed a real threat if talks had collapsed. Business Week, 6-3-14.