The Seattle City Council voted Monday afternoon to kill a bill that would further legalize and regulate homeless encampments. Council member Nick Licata, the bill’s sponsor,hoped it could make encampments in the city safer and better organized—encampments like Nickelsville, which has been plagued by crime and neighborhood acrimony—by keeping them regulated, policed, and connected with social services. Licata knew early in today’s council meeting that the bill would fail—yet he pressed his case. “We know that there are thousands of people who can’t get into shelters every night,” he said. This bill creates “regulatory measures . . . to help these people stay safe.” The measure would have allowed encampments, under certain conditions, to be permitted in nonresidential areas of the city for up to a year. The vote was 5–4, with Licata, Mike O’Brien, Sally Bagshaw, and Bruce Harrell voting in favor. The council’s majority opposed the measure on grounds that encampments are an inadequate solution to homelessness. The Stranger, 7-29-13.

Conlin back to work after bicycle accident

Seattle City Councilman Richard Conlin was back at work Monday after breaking his right shoulder blade when his bicycle and a car collided Sunday in the Madrona neighborhood. His arm is in a sling but he can write and type, he said. Conlin, 65, said the incident has not changed his views on bicycle policy, other than to heighten awareness of the need for vigilance while riding. The city is considering an update to its Bicycle Master Plan, which includes ideas to increase spending and road space to create safer bikeways. Seattle Times, 7-29-13.

Initiative 522, the November ballot measure that requires labeling of genetically modified foods, has won important support from the Seattle attorney who handles more legal cases of injury from food safety violations than any other in the country. “After 20 years of doing food borne illness litigation, I believe it is unwise not to tell what is in food or how it is made:  The more we know, the better,” said Bill Marler.  “On average, consumers make a good decision with the proper information.  It’s transparency, the same philosophy you have behind the Freedom of Information Act or our campaign finance disclosure laws.” The initiative would require most raw agricultural commodities, processed foods plus seed and seed stocks, if produced using genetic engineering as defined, to be labeled as genetically engineered when offered for retail sale in Washington.  If adopted, it would become effective in July of 2015. Seattle P-I, 7-29-13.

Washington’s Republican State Chairman Kirby Wilbur resigned his post Monday and said he is taking a job in Washington DC. The veteran KVI radio talk show host has headed the Republican Party since early 2011.  He has chaired its state convention platform committee for years, and has probably eaten more chicken and spoken to more Lincoln Day dinners than any other man or woman alive. “I have been offered a five-year contract with the Young America’s Foundation that I would be foolish not to accept,” Wilbur said.  “I will be moving to the ‘other’ Washington within the next couple of months to write the next chapter of my life.” The Young America’s Foundation is a conservative youth organization spread across the country, and a major arm of the conservative movement. Vice chairman Luanne VanWerven will become acting Republican state chairman until a successor to Wilbur is chosen.  The state committee must act within 90 days. Seattle P-I, 7-29-13.

Op-ed: The dog days of summer and the Boeing blame game

These are the dog days of the summer around the state capital. It’s not as uniformly sunny as Eastern Washington. But morning fog and low clouds – a pattern Seattle’s television weather heads describe with the more elegant-sounding title of “marine layer” – give way to bright warm afternoons during which it is difficult to work up much fervor over anything. So it seemed last week as Republicans made a half-hearted stab at playing the latest round of “who’s losing Boeing?” after the aerospace giant said it will move some 375 engineering jobs to California. Maybe the standard complaints about Washington’s relative job competitiveness don’t work as well when the boogie man is California. Or that one of the things Boeing reportedly wanted from the late, great Legislature was a transportation package that the Senate Republicans helped scuttle. Or that something which could make Senate Republicans into Boeing’s BFF is something they can’t deliver: turning Washington into a right-to-work state. Jim Camden, Spokesman-Review, 7-27-13.

California city to use eminent domain to seize homes—and save them from foreclosures; bankers are not happy 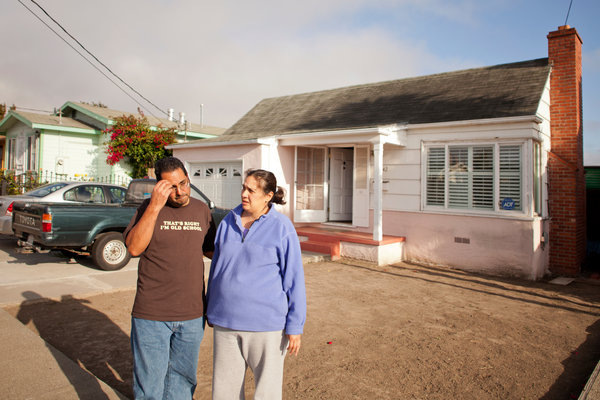 The power of eminent domain has traditionally worked against homeowners, who can be forced to sell their property to make way for a new highway or shopping mall. But now the working-class city of Richmond CA hopes to use the same legal tool to help people stay right where they are. Scarcely touched by the nation’s housing recovery and tired of waiting for federal help, Richmond is about to become the first city in the nation to try eminent domain as a way to stop foreclosures. The results will be closely watched by both Wall Street banks, which have vigorously opposed the use of eminent domain to buy mortgages and reduce homeowner debt, and a host of cities across the country that are considering emulating Richmond. New York Times, 7-29-13. Hundreds of workers at McDonald’s and other fast food outlets across New York went on strike Monday for higher wages in a movement organizers hope will spread nationwide. Sporadic walkouts left managers to serve customers at flagship McDonald’s outlets on Times Square and 5th Avenue in Manhattan. Organizers said the strike had hit around 60 eateries operated by McDonald’s, Wendy’s, KFC, and Burger King across the New York area. The striking workers are demanding the introduction of a standard wage of $15/hour, more than twice the $7.25 minimum wage that many fast food employees earn here. The average wage in the sector in New York is around $9/hour and, unlike staff in mainstream restaurants, employees cannot count on their income being topped up by tips. Raw Story, 7-29-13.

Ever since the Supreme Court gutted a centerpiece of the Voting Rights Act and threw it back in Congress’ lap, lawmakers in both parties have engaged in happy talk about the prospects of patching the provision used to proactively snuff out voter discrimination against minorities in the state and local governments where it’s most prevalent. But it’s looking less and less likely that a fix will be agreed to because Republicans have little to gain and a lot to lose politically if they cooperate. A recent House Judiciary Committee hearing made clear that Republicans have little to no interest in reconstituting the Voting Rights Act. Judiciary Chairman Bob Goodlatte (R-VA) opened by emphasizing that even after the Supreme Court’s decision, “other very important provisions of the Voting Rights Act remain in place.” Talking Points Memo, 7-29-13.

If Bank of America was “too big to fail,” why isn’t Detroit? 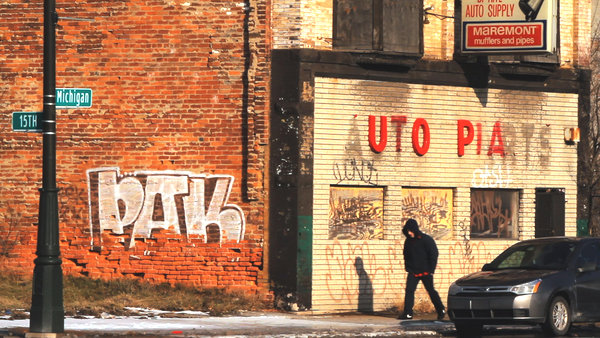 An abandoned auto parts shop in Detroit that has become known as Utopia, from the documentary “Detropia.”

Last week President Obama, in laying out his economic agenda, talked about the need to repair the country’s infrastructure. Where better to start than in Detroit? By the standards of the banking and auto bailouts, the sums involved are small: the banks received $700 billion; the auto companies $80 billion. Already, there are hopeful signs. The auto industry has turned a profit and repaid much of the federal monies. And hipsters and artisans aren’t the only ones moving into Detroit: firms such as Blue Cross/Blue Shield; Quicken Loans, an online-mortgage lender; GalaxE.Solutions, a tech firm; and the insurance company Title Source have also recently arrived. Americans of all ages are increasingly eager to live in urban environments: a smaller, rebuilt Detroit could eventually thrive. “I speak of new cities and new people,” Obama said last week, quoting Carl Sandburg. Here’s an opportunity to turn words into deeds. John Cassidy, New Yorker, issue of 8-5-13.