The city’s largest business chamber, the Seattle Metropolitan Chamber of Commerce, has the dubious honor of becoming the first and only organization to oppose a November ballot measure that would levy a small property tax to publicly fund local city council and mayoral campaigns. Proposition 1, otherwise known as the Fair Elections Seattle campaign, would create a system in which participating candidates would raise at least $10 (and no more than $50) from 600 Seattle residents. Those funds would then be matched 6-to-1 with public funds up to $210,000, giving each candidate no more than $245,00 to spend on their bid for office. The Stranger, 9-12-13.

A who’s-who group of business and civic leaders, headed by Bill Gates Sr., is calling for the University of Washington to step up its game, admit more in-state students, and compete more aggressively for top faculty talent. In turn, the state needs to do a better job of funding the university to help it become a stronger engine for economic growth. Gates, a former UW regent, presented the 50-page report to the regents board at its monthly meeting Thursday. The group lays out a case for the state to put more money into higher education, because “reinvesting in higher education is the most powerful way to fuel our state’s economy and continue drawing the best and brightest people to our state.” Seattle Times, 9-11-13.

Under a new proposal, Seattle businesses would have to recycle glass, plastic, tin and aluminum starting next July.

Businesses in Seattle would have to recycle glass and some other materials starting next summer if the City Council OKs legislation that was introduced Thursday. City Council member Jean Godden’s proposal would require businesses to recycle plastic, tin, and aluminumin addition to glass. The rule would take effect in July 2014. Godden said Seattle businesses send more than 8,000 tons of bottles and cans to the landfill every year. She said that by 2019, her proposal would reduce the amount of recyclables going to the dump by 6,000 tons. Godden expects the full council to pass the proposal on Sept. 23. Puget Sound Business Journal, 9-12-13.

The Washington state Supreme Court today rejected an attempt by Bellevue developer Kemper Freeman Jr. to stop Sound Transit from building a light-rail line on the Interstate 90 floating bridge. The 7-2 decision gives a green light to the $2.8 billion East Link project, which when completed in 2023 would connect Seattle, Mercer Island, Bellevue, and Overlake with light-rail service. This appears to be the end of the line for legal challenges by Freeman, developer of Bellevue Square and a longtime advocate for motorists. His transportation adviser, Bruce Nurse, said no further lawsuits have been discussed, and he seriously doubts there will be any. ”We’re getting somewhat battle fatigued from fighting the government.” Chief Justice Barbara Madsen, writing for the court majority, found that the conversion of two high-occupancy vehicle lanes to rail lines doesn’t violate the state Constitution because the state motor vehicle fund that built those lanes will be reimbursed by Sound Transit. Seattle Times, 9-12-13.

A clash over the handling of the city of Kent’s budget continues to be a focus in the mayor’s race between Republican incumbent Suzette Cooke and Democratic challenger Tim Clark. Cooke emphasized during the Kent Neighborhood Council Candidate Forum Monday night that the budget has started to come back strong after fighting through a recession that led to cutting 100 city positions. Clark, who has spent the last four years on the Kent School Board after 16 years on the Kent City Council, said, “fiscal mismanagement” led the city to have just 2 percent of its 2012 budget in reserve. Kent Reporter, 9-11-13.

You can close the book on an allegation which captivated attention in the waning days of the 2012 congressional contest between Republican John Koster and Democrat Suzan DelBene. Spoiler alert: It wasn’t true. Koster insinuated that DelBene—now the congresswoman—had given special treatment to a prominent supporter of Democratic candidates and causes while director of the state Department of Revenue in 2011. This week, an investigation found “no reasonable cause to believe an improper governmental action occurred.” DelBene, who described Koster’s claim as “a baseless accusation from a desperate campaign,” declined to comment on the auditor’s findings. Everett Herald, 9-12-13. 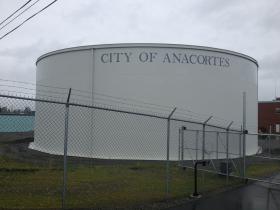 Water resevoir that could have been used to supply water for bottling plant.

Plans to build an enormous beverage bottling plant in Skagit County have been halted. The company behind a proposed facility has backed out of the project. Tethys planned to build the largest beverage bottling plant in the country. But the proposal was met with fierce debate within the community. There was no guarantee of jobs and many feared Tethys would transfer the water rights to a bigger company such as Coca-Cola or Nestle. Three years ago, the City of Anacortes signed a deal with Tethys to sell the company five million gallons of Skagit River water a day for the next 50 years. KUOW, 9-12-13.

A candidate for Mabton City Council was arrested Tuesday for violating an anti-harassment order. Freddie Perales, 24, was arrested in Mabton and booked about 5:45 p.m. into the Sunnyside jail, according to jail records. He was released on a $1,000 bond. A court date has not been set. Perales is running for Position 3 on the Mabton City Council against incumbent Mark Gorneau. Perales’s criminal history includes several traffic violations and low-level crimes, including impersonating a police officer to a car full of teenage girls several years ago. Yakima Herald-Republic, 9-12-13.

As Spokane voters wait for a stronger police ombudsman, one councilman takes matters into his own hands

Spokane City Councilman Steve Salvatori says he’s “out of excuses” for citizens who ask why Proposition 1, a measure passed overwhelmingly in February to give the Office of Police Ombudsman expanded powers, hasn’t yet resulted in actual changes. The city says such changes — among them, independent investigative powers and a commission to choose future ombudsmen — will be included in a new contract with the Spokane Police Guild, but the two sides haven’t reached one in 20 months of negotiations. Now Salvatori plans to bring forward an ordinance implementing the powers outlined in Proposition 1, despite arguments that such changes have to happen through negotiations. Pacific Northwest Inlander, 9-10-13.

‘Race to the Top’ for education a flop, report finds

The Department of Education rejected the report’s conclusions.

The Obama administration’s signature $4 billion Race to the Top initiative, designed to spur far-reaching education reforms across the country and raise student achievement, is largely a failure, an analysis released Thursday concludes. Most winning states made what the Broader, Bolder Approach to Education labeled “unrealistic and impossible” promises to boost student achievement in exchange for prizes that were ultimately paltry in comparison with their pledges. But three years in, Race to the Top hasn’t spurred states to address what really is behind students’ poor academic performance: poverty and the associated lack of opportunities that accompany it, said Elaine Weiss, national coordinator of the Broader, Bolder Approach to Education. Her group advocates for a more targeted focus on poverty over the current slate of education reforms involving testing and accountability. Politico, 9-12-13.

Marijuana-related businesses, legal in their states, should be able to deduct the same business expenses on their federal tax forms as any other business, according to a very unusual coalition of Washington, D.C. opposites. Rep. Earl Blumenauer (D-OR), a very liberal House member, was joined Thursday by Grover Norquist, head of Americans for Tax Reform, author of “The Pledge” not to raise taxes that Republican candidates for President and Congress are quasi-required to sign. Under federal law, business expense deductions are off-limits for those enterprises considered to be drug traffickers.  Blumenauer, Rohrabacher and 10 other House cosponsors want to change that.  Reps. Adam Smith and Jim McDermott (D-WA) are cosponsors. Seattle P-I, 9-12-13. 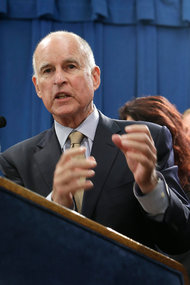 California’s top lawmakers Wednesday pledged their support for a plan to raise the minimum wage in the state to $10 an hour, which could soon give California workers the highest minimum pay rate in the country. In a rare show of backing for pending legislation, Gov. Jerry Brown, a Democrat, announced his “strong support” for a bill in the State Legislature that would raise the minimum wage to $10 per hour from $8 by the start of 2016. Currently, Washington has the highest minimum wage of any state, at $9.19 per hour. Leaders of the Legislature, where Democrats hold majorities in both houses, also announced their support for the bill on Wednesday, all but guaranteeing its passage before the legislative deadline on Friday. New York Times, 9-11-13.

Artist’s rendering of a Walmart proposed for Washington DC

Mayor Vincent C. Gray vetoed legislation Thursday that would force the District’s largest retailers to pay their workers significantly more, choosing the potential for jobs and development at home over joining a national fight against low-wage work. Gray’s quandary is playing out in many U.S. cities, where local leaders who generally sympathize with worker causes are also eager to lure jobs and commerce for their constituents. Retailers, most notably Wal-Mart, have placed an increasing focus on urban expansion, while unions and advocates for workers have pushed measures like the District’s “living wage” bill as a valuable hedge against the proliferation of low-paying jobs. The veto, which is unlikely to be overridden by the D.C. Council, clears the way for Wal-Mart to continue its entry into the District — plans years in the making that were thrown into question after lawmakers embraced the wage proposal this year. Washington Post, 9-12-13.

Very early Wednesday morning, the city council in Richmond, California, narrowly voted to move forward with a plan to aid underwater homeowners. It’s a plan so controversial that everyone from Wall Street investment banks, to the National Association of Realtors, to U.S. congressmen, to state politicians, to the Federal Housing Finance Agency has weighed in. Richmond has now become the only municipality in the country to seriously consider using eminent domain to seize underwater mortgages from the investors who currently hold them. The city would not seize the properties themselves – as more typically happens in eminent domain cases – but would use the power to essentially purchase the mortgages at their current market value (against the wishes of the banks that hold them). Atlantic Cities, 9-11-13.

An Arlington, Va.-based conservative group, whose existence until now was unknown to almost everyone in politics, raised and spent $250 million in 2012 to shape political and policy debate nationwide. The group, Freedom Partners, and its president, Marc Short, serve as an outlet for the ideas and funds of the mysterious Koch brothers, cutting checks as large as $63 million to groups promoting conservative causes, according to an IRS document to be filed shortly. The 38-page IRS filing amounts to the Rosetta Stone of the vast web of conservative groups — some prominent, some obscure — that spend time, money and resources to influence public debate, especially over Obamacare. We asked Short what he has to show for all that money spent in 2012, when Republicans failed at a within-reach effort to take back the Senate and Romney left the GOP in a deep hole by getting wiped out among some demographic groups, including Hispanic and Asian voters. “Our members are committed to the long term,” Short said, “not to one individual cycle.” Politico, 9-11-13.