The surprise resignation of state GOP chairman Kirby Wilbur has sent a flurry of text messages and emails flying in Republican circles, as party activists chat up possible successors. One name that has emerged is Susan Hutchison, the former KIRO-TV anchor who unsuccessfully ran for King County Executive in 2009, largely downplaying her ties to the Republican Party. In a phone interview Tuesday, Hutchison confirmed she is thinking about running for the GOP job. As for her efforts to portray herself as “nonpartisan” in the 2009 King County Executive race, Hutchison said “that was what was required in that job — it was a nonpartisan position.” (Sure, Susan, just like Rush Limbaugh is a feminist.) Seattle Times, 7-30-13.

Some of the first attack ads of the primary season have been mailed by Albert Shen’s campaign for Seattle City Council. Two large glossy fliers highlight Shen’s professional work as a civil engineer who has managed large public projects such as Sea-Tac’s new parking garage. One says, “Albert Shen makes things work.” But in the lower corner of each is a picture of a smiling Mayor Mike McGinn with a tiny, creepy smiling City Council member Mike O’Brien, Shen’s opponent in the race, superimposed against McGinn. The first piece shows the small O’Brien pasted onto McGinn’s chest, with the words “Your other choice — Mike O’Brien who is in Mayor McGinn’s pocket.” The second has a tiny O’Brien on what seems to be the mayor’s raised index finger and says “Mayor McGinn’s finger puppet – Mike O’Brien.” The juxtaposition of the small O’Brien with the large McGinn gives an impression of O’Brien as a sort of witless homunculus who does McGinn’s bidding. It also suggests that just associating O’Brien with the unpopular mayor is enough to win voter support. Seattle Times, 7-30-13.

The proposed Tesoro-Savage oil transfer terminal at the Port of Vancouver would include operations at Terminal 5, west of Interstate 5.

Facing the opportunity to land the biggest oil terminal in the Pacific Northwest, the Port of Vancouver wanted to manage a highly lucrative lease deal with Tesoro Corp. and Savage Companies as smoothly as possible. The port settled into exclusive negotiations with the companies and moved the controversial project through public meetings. On July 22, during a special public meeting on broad elements of the lease, the port fumbled. Port commission President Jerry Oliver told a hearing room overflowing with opponents of the controversial oil-by-rail plan that he, Commissioner Nancy Baker, and Commissioner Brian Wolfe would discuss their public testimony in private—an apparent violation of Washington state’s open public meetings law, according to experts. Vancouver Columbian, 7-30-13. 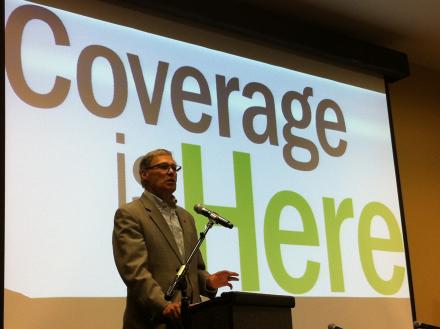 Washington consumers will know later this week what insurance plans they’ll have to choose from on the state’s new health exchange. Insurance companies face a Tuesday deadline to submit plans to the state. Nine have applied so far to offer products on the Washington Healthplan Finder, the online marketplace where consumers can comparison-shop for coverage. The Affordable Care Act, or Obamacare, requires those exchanges to be open for business by Oct. 1. State Insurance Commissioner Mike Kreidler says he’s happy with the number and quality of choices Washingtonians will have. “We’re seeing rates that are coming in with these health carriers that are very competitive with the existing market, but with huge improvements in benefits and in limitations on out-of-pocket expenses. And that’s a big change for us,” Kreidler said. KPLU, 7-30-13.

A majority of Tacoma residents support taxing utility companies to fund road repairs, according to a June survey commissioned by city officials. The survey, completed before Tacoma officials decided to put a utility tax measure on the Nov. 5 ballot, found that between 60 percent and 71 percent of respondents support increasing taxes on utility companies if the money is used solely for road improvements. Tacoma’s Proposition 1, which the City Council last week unanimously decided to send to voters, would impose an additional 2 percent tax on natural gas, power, and phone companies’ gross earnings to fund city street repairs. Tacoma News Tribune, 7-30-13.

The Green Mountain Lookout: Historic, scenic, and Congress is on the cusp of saving it.

The 16-month effort to save a historic, scenic 6,500-foot high lookout cabin atop Green Mountain in Snohomish County is on track and moving 2,500 miles away in the halls of an otherwise paralyzed U.S. Capitol. The House Natural Resources Committee, hitherto a burial ground for outdoor recreation bills, is slated Wednesday to vote out and send to the House legislation that would keep the lookout at its scenic summit home. Sen. Maria Cantwell (D-WA) and the U.S. Forest Service boosted it Tuesday at a Senate Natural Resources Committee hearing. A group based in Montana, Wilderness Watch, brought a lawsuit demanding removal of the lookout—located in the Glacier Peak Wilderness Area—after the Forest Service rebuilt the decaying 1933-vintage cabin and used a helicopter to haul in supplies. Seattle P-I, 7-30-13. The now-retired MV Rhododendron, at the Port Defiance ferry terminal in Tacoma.

The state Transportation Commission is set to vote Tuesday on increasing fares for state ferries. The proposed fare hikes of about 6 percent would be phased in over the next year. They would raise more than $320 million in two years to meet state budget requirements set by the Legislature. Before voting, the Transportation Commission is scheduled to take more public testimony. Seattle Times, 7-30-13.

Multiple conservatives leading the charge to shut down the government if Obamacare isn’t defunded have begun to admit it’s a lost cause as senior Republicans put the kibosh on the plan. Sen. Ted Cruz (R-TX) lamented Monday afternoon that Republicans are too “scared” to follow through with the plan to withhold support for funding the government after the Sept. 30 deadline unless Obamacare is defunded. Senior Republicans are deriding the plan as “dumb,” “silly” and a “temper tantrum,” warning that it will fail and damage the party’s prospects in the upcoming 2014 elections. The divisions reflect the GOP’s catch-22 over Obamacare. After riling up their base and repeatedly promising to spare no effort to thwart the health care law, they face the wrath of conservatives for refusing to put themselves on the line in service of the cause, despite daunting political odds. Talking Points Memo, 7-30-13.

An appeals court Tuesday unanimously upheld a decision striking down New York City’s restrictions on the sale of large sugary drinks, dealing a serious blow to Mayor Michael R. Bloomberg’s hopes of reviving the rule before his term runs out. The court, the First Department of the Appellate Division of State Supreme Court in Manhattan, concurred with a lower court’s ruling that the city’s Board of Health, appointed by the mayor, overstepped its bounds as a nonlegislative body by approving the rule. “Such mechanism necessarily looks beyond health concerns, in that it manipulates choices to try to change consumer norms,” Justice Dianne T. Renwick wrote. The board, the decision stated, “violated the state principle of separation of powers.” New York Times, 7-30-13. 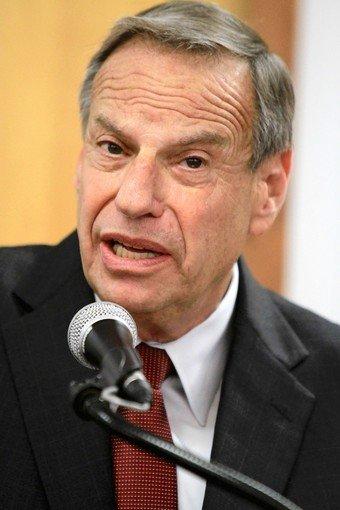 Saying taxpayers shouldn’t have to foot the bill for the mayor’s “mess,” the San Diego City Council voted unanimously Tuesday night not to pay any of Bob Filner’s legal bills as he fights a sexual harassment lawsuit filed by one of his top aides. The move came just hours after the council voted — also unanimously — to sue Filner to recover any costs imposed on the city by the lawsuit, which names both Filner and the city as defendants. “This is part of due process,” City Atty. Jan Goldsmith said after Tuesday’s vote authorizing him to file a lawsuit against Filner. “If Bob Filner engaged in unlawful conduct and the city is held liable, he will have to reimburse us every penny the city pays, and its attorney fees.” The phrase “due process” has been a mantra for Filner, 70, a Democrat, and his supporters in explaining why he should not resign and emphasizing that the allegations against him have not been proved. Los Angeles Times, 7-30-13.

Op-ed: The GOP divide on immigration

The tone of the immigration debate has recently taken a sharp downward turn, which may not be a bad thing for immigration reform’s legislative prospects. Rep. Steve King’s description of the children of undocumented workers as having “calves the size of cantaloupes” from hauling bales of marijuana across the desert brought a cascade of rebuke from his fellow Republicans. “There’s no place in this debate for hateful or ignorant comments from elected officials,” said Speaker John Boehner. King seemed confused by the criticism. Were people offended by “my choice of the fruit”? This is the GOP challenge in miniature: how to appeal to an increasingly diverse nation when the behavior of a small but vocal portion of its coalition is both offensive and clueless. Michael Gerson, Washington Post, 7-29-13.

Why Amazon is worse than Walmart President Obama visited an Amazon warehouse in Chattanooga, Tenn., Tuesday to talk  job growth — but the speech came at a particularly awkward time for the government to embrace the company. Or perhaps there’s no more apt time: a time when we need to ask whether Amazon’s growth will lead to the kind of economy or culture we actually want to have. This isn’t the first time the administration has embraced Amazon: Obama’s Justice Department, in April 2012, went after publishers and Apple for price-fixing, leaving Jeff Bezos’ books-and-everything-else marketplace with what the New York Times called a “monopoly.” But this visit comes at a time when Amazon’s clout in the book world, in Washington and on Wall Street seems increasingly unstoppable. Amazon is evidently seen, by Obama and his administration, as the sort of American job-creating corporation that underpins the economy. However, unlike, for example, Walmart, a company with many deplorable practices but a massive ability to generate profit, Amazon uses everything (cheap, cheap books; distribution centers; the Kindle) as a loss-leader for everything else. Salon, 7-30-13.