Reactions to Supreme Court decision rendering I-1053, I-1185  unconstitutional

The Republican-oriented majority in the Senate says it has a plan to keep tax hikes on supermajority lockdown — despite Thursday’s Supreme Court ruling. Coalition leaders, who control which bills are brought to a full Senate vote, say they won’t allow any tax bills go to a floor vote of the Senate. The only exception would be when votes are counted in advance, and two-thirds say they will support a tax. Crosscut, 2-28-13. Sen. Rodney Tom (“D”-48) said he would bring a change to Senate rules up for a vote on the floor to reinstate the tax restrictions passed by voters and struck down today by the Supreme Court. Tacoma News Tribune, 2-28-13. Sen. Adam Kline (D-37) lays out the good news and the bad news about what the decision means going forward, on the Senate Democrats’ blog. 2-28-13. In Washington State, you can’t amend the constitution by initiative. Which is why with today’s landmark court ruling, the two-thirds requirement for tax increases is dead, dead, dead (and with it, their phony threat of a constitutional amendment). David Goldstein, the Stranger, 2-28-13.

Two top Democrats, chairs of the House Appropriations and House Finance Committees, are refusing to schedule votes on the Family and Medical Leave Insurance (HB 1457) and Paid Sick Days (HB 1313) bills in front of their respective committees. It’s time for a reality check.  By denying Washington workers the ability to earn paid sick time and family and medical leave on the job, legislators actually are digging a deeper budget hole for themselves – and for Washington taxpayers. Ross Hunter (D-48) and Reuven Carlyle (D-36), they’re talking about you. Washington Policy Watch, 2-28-13.

Proposed legislation that would allow coastal counties to forbid marine aquaculture net-pen facilities died in committee last week, dashing hopes of Jefferson County commissioners who had wanted to ban the industry. “There is nothing more that we can do this year,” said state Rep. Kevin Van De Wege (D-24), who introduced HB 1599 on Jan. 31. “I was disappointed that the fish-farming industry and the [state] Department of Ecology worked so hard to defeat this,” Van De Wege said. Ecology spokesman Curt Hart said his department’s position was consistent with previous policy. “We have said that marine net pens are an approved water-dependent use, and it should be fairly considered,” Hart said. “This doesn’t mean that net pens should be allowed without restrictions,” he added, “only that there should be a process in place for their approval.” Peninsula Daily News, 2-26-13.

About 50 workers picket outside the main entrance to the Port of Vancouver on Wednesday.

The owner of a Vancouver, Wash., grain terminal imposed a lockout on longshore workers Wednesday after claiming that a company-contracted investigation indicated a union leader sabotaged equipment in December and again in January. United Grain, part of the Japanese conglomerate Mitsui & Co., said replacement workers (The correct term is “scabs”) will operate its Vancouver export terminal for an “indefinite” period, according to a statement released by the company. The union called the company’s allegations unfounded, and locked-out longshore workers immediately picketed outside the terminal. ILWU Local 4 ranks third in membership on the Columbia River with 177 longshore workers and 109 part-time dockworkers, according to its website. Seattle Times, 2-28-13.

Recently, a draft of a letter appeared that represented the first organized opposition to the campaign for district-based elections. It looks like it may end up as a fight between progressive allies. Two weeks ago, Steve Lansing, a community organizer with grocery and retail workers’ union UFCW 21, sent an e-mail to the union’s community partners saying that UFCW 21 and SEIU Healthcare 775NW, as well as some community groups, had “serious concerns” about the current districting proposal put forth by coalition Seattle Districts Now. The letter argued that this proposal runs the risk of “undermining the voting power of people of color and immigrants in Seattle by concentrating them heavily in one council district.” Stranger, 2-27-13.

A strengthened, Senate-written Violence Against Women Act (VAWA) passed the U.S. House of Representatives Thursday morning after lawmakers rejected a weaker version sponsored by Republican leaders.  The anti-domestic violence legislation goes to President Obama for signature. Lawmakers turned back a version sponsored by Rep. Cathy McMorris Rodgers (R-WA), chair of the House Republican Caucus, that omitted provisions protecting gay women who are victims of violence and weakened protections for native women on Indian reservations and undocumented immigrants who are victims of domestic abuse. Seattle P-I, 2-28-13.

Op-ed: Obama is desperately trying to find a way to approve the Keystone Pipeline President Obama, in return for allowing this Pipeline to be built, allegedly wants Canada to express an even stronger verbal commitment to oppose global warming than Canada already has verbally done. According to the Calgary Herald, “the United States … is seeking confirmation of Alberta action on the climate change front before it approves the pipeline,” as if mere “confirmation,” or other such verbal assurances, would mean anything. It has long been known that this Pipeline, while it would add the world’s dirtiest oil to the international oil market, will actually increase oil prices slightly within the United States. Eric Zuesse, Business Insider, 2-27-13.

Op-ed: Scalia’s slam of the Voting Rights Act is a bar-stool rant 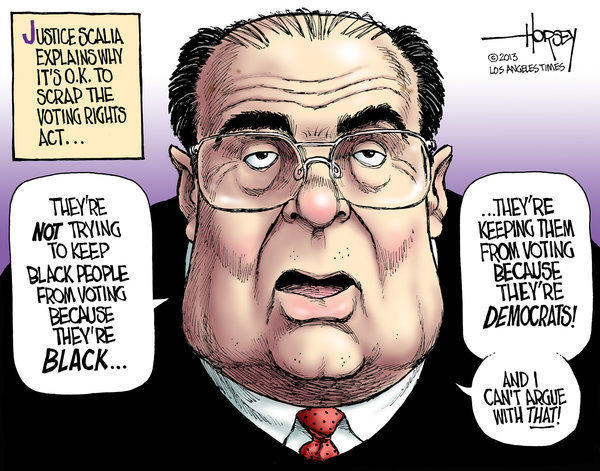 U.S. Supreme Court Justice Antonin Scalia is alleged to be one of the great intellects of conservative jurisprudence, but his comments during oral arguments over a challenge to the 1965 Voting Rights Act displayed all the mental acuity of a third-tier talk radio bozo. In 2006, lawmakers determined that a long list of problems still exists and they renewed the Voting Rights Act for an additional 25 years. The vote was overwhelming in the House, unanimous in the Senate, and was hailed by President George W. Bush as a victory for American democracy. In court on Wednesday, however, Scalia mocked that vote. He said the Senate’s unanimity simply proved the law had not been given serious consideration. The senators were afraid, he said, to cast a vote against a law with a “wonderful” name. He went on to assert that the reauthorization of the act was merely “a phenomenon that is called perpetuation of racial entitlement.” That sort of legal reasoning may be good enough for someone sitting on a bar stool well into his third pint, but it is not good enough for the highest court in the land. Scalia makes self-serving assumptions about what was on the minds of senators in 2006 — afraid, not serious, enamored with a name — with no facts to back up his barbs. David Horsey, LA Times, 2-28-13.

Close to Slavery: Guestworker Programs in the United States

In the debate over comprehensive immigration reform, various policymakers and business groups have suggested that Congress create a new or expanded guestworker program to ensure a steady supply of foreign workers for industries that rely on an abundance of cheap labor. Congress should look before it leaps. The current H-2 program, which provides temporary farmworkers and non-farm laborers for a variety of U.S. industries, is rife with labor and human rights violations committed by employers who prey on a highly vulnerable workforce. It harms the interests of U.S. workers, as well, by undercutting wages and working conditions for those who labor at the lowest rungs of the economic ladder. This program should not be expanded or used as a model for immigration reform. Southern Poverty Law Center, 2-20-13.