Wednesday night’s Juneteenth mayoral forum in the Central District drew answers from the candidates on some tough questions about education and race. Once again, someone in the audience laughed out loud at one of Charlie Staadecker’s earnest answers, librarian Joey Gray told Frisbee stories, and Bruce Harrell referred to himself in the third person. Former City Council member Peter Steinbrueck, still the subject of some head-scratching over his reading selection at a library forum this week, was not at the forum. He is out of town. Mayor Mike McGinn talked about his work on the Youth Violence Initiative, and Harrell talked about problems with institutional racism. And all the candidates were clear that out-of-school suspensions are a problem, and the city needs a program to keep kids in trouble in school. Seattle Times, 6-20-13.

Embattled Pacific mayor Cy Sun is once again trying to get rid of his public safety director, John Calkins. This comes two weeks after a judge ordered Sun to reinstate Calkins and Pacific Police Lieutenant Edwin Massey, whom Sun had both suspended.
Sun gave Calkins notice of a Loudermill hearing for next Friday, three days after Sun’s own recall election. A Loudermill hearing is part of the due process for a U.S. government employee prior to termination or severe discipline, and gives them the opportunity to present their side of the story. Sun would still be in office until the results of the elections are ratified on July 9, two weeks after the election. KING, 6-20-13. In less than two years in office, Sun–under the guise of fighting corruption he claims is rampant in city government–has put Pacific on life support by dismantling city staff and fighting an ongoing battle that has decimated the City’s police force. And his refusal to adequately staff vacant department head positions at City Hall instigated the loss of the City’s liability insurance. Auburn Reporter, 6-20-13.

Machinists at Auburn’s Belshaw Adamatic Bakery Group, on strike since March 24, received a show of solidarity from their International Association of Machinists union mates Tuesday. Tom Wroblewski, president of IAM District Lodge 751, visited striking members of IAM Local 79, pledging the support of aerospace machinists at Boeing and donating $1,000 to the union’s strike fund. Belshaw Adamatic manufactures bakery equipment for wholesale and retail bakeries, specializing in donut fryers. “We tried to negotiate a fair contract with the employer,” IAM President Dan Morgan said. “The employer’s only offer was very weak economically, less than 2 percent. But our major issues are training of employees for promotional opportunities and outsourcing work. The employer seems to want to outsource their work rather than train employees.” Auburn Reporter, 6-19-13.

Sen. Don Benton (R-17) said Thursday afternoon he has filed a complaint against Sen. Ann Rivers (R-18) over two incidents this year where Rivers directed expletives at him. Benton says Rivers shouted at him on April 19 on the floor of the Senate in what he calls “an uncontrollable tirade,” and again during a June caucus meeting. Rivers said she hasn’t seen the complaint, but when contacted by the Columbian offered this response: “I will stand my ground against anyone who attempts to bully, intimidate, or threaten me.” Rivers confirmed she clashed with Benton on the two occasions. She said she intends to release today her documentation of the incidents, which she had filed with the Secretary of the Senate’s office. Vancouver Columbian, 6-20-13.

Starting in the 1970s, Washington state bridge inspectors made note of evidence that large loads were clipping the Interstate 5 span that collapsed into the Skagit River May 23. By the middle of last year, an inspector identified eight different points on the bridge that had high-load damage, including some portions in which components were deformed by the impact. Then, last fall, inspectors encountered perhaps the worst damage yet: A tall vehicle traveling northbound had struck the overhead bridge structure, ripping a 3-inch gash in the steel, causing three portions to distort, and tearing off surrounding paint, according to images and documents obtained by Associated Press under public records law. Even after that, state officials still didn’t take precautions to prevent truckers from doing it again. Associated Press (Bellingham Herald), 6-20-13.

An annual report on Washington’s so-called Death with Dignity law shows 121 terminally ill patients received medication that could be used to end their lives in 2012. Continuing a slow but steady climb in participants, it’s more than the 103 people who were provided with the drugs in 2011, according to the report by the state Department of Health. Not all of the people who receive the drugs use them. At least 83 of last year’s patients took the lethal dose and died. Others died without taking the medication — for a total of 104 deaths – or their information was not available. Tacoma News Tribune, 6-20-13.

More than 3,000 petition signatures have been collected seeking to reverse recent Pasco annexations and to take the city manager out of power. Franklin County resident Roger Lenk and the Citizens for Lifestyle Preservation plan to bring the petitions Friday to the Franklin County Courthouse with the goal of adding two measures to the Nov. 5 general election ballot. The first petition calls for reducing the size of the city by eliminating the 2009 annexation at Court Street and Road 76 and the 2013 annexation in the “doughnut hole” area. The other petition would require the city to move to a mayor-council form of government, instead of the current system that makes the city manager the executive officer. Tri-City Herald, 6-19-13. 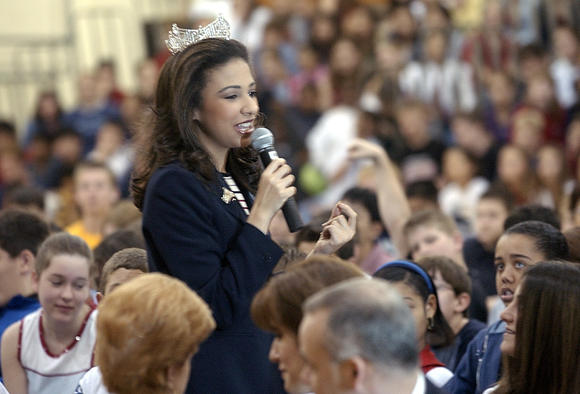 While reigning Miss America in 2003, Erika Harold speaks at Margaret Made Jr. High School in Elk Grove Village about youth violence and bullying.

A Downstate Illinois GOP county chairman resigned today after likening former Miss America Erika Harold, a Republican who’s challenging a sitting Republican Congressman in next year’s primary election, to a “street walker” whose “pimps” were Democrats and moderate Republicans. Jim Allen of Farmersville, the chairman of the Montgomery County GOP, sent the resignation letter today to new Illinois Republican Chairman Jack Dorgan. Dorgan called Allen’s remarks “offensive and inappropriate.” Allen, who supports freshman Republican U.S. Rep. Rodney Davis of Taylorville, made his remarks in an e-mail to a supporter of Harold. She is the 2003 Miss America from Urbana and a former Chicago attorney. Chicago Tribune, 6-20-13.

A state representative who sparked national controversy by suggesting the U.S. government was behind the April 15 bombings at the Boston Marathon has resigned. Stella Tremblay, an Auburn Republican, submitted a letter of resignation that was received yesterday, House spokesman Mario Piscatella said. In the rambling three-page letter, which is dated Sunday and addressed to House Speaker Terie Norelli, Tremblay notes that her resignation “certainly . . . comes as a sigh of relief from leadership of both parties. However, this action is due to ‘Divine Providence’ that has presented my family with an opportunity to leave the district in which I now reside.” Concord Monitor, 6-21-13.

The Supreme Court Thursday reinforced the ability of corporations to write their own rules for resolving disputes with customers, finding that a group of merchants were bound by an arbitration agreement with American Express even if the terms made it prohibitively expensive to pursue some types of claims against the company. Consumer advocates say the terms of the agreements can allow companies to escape accountability. The courts increasingly have sided with the companies, steadily limiting the circumstances in which customers can pursue claims outside of the arbitration process. Thursday’s 5-3 ruling limits the ability of customers to pursue class actions. The conservative majority held that companies could require individual arbitration even if a class action is the only way to make the claim economically viable. New York Times, 6-20-13.

Representative Michele Bachmann at a rally outside the US Capitol on June 19, 2013.

Halfway through a passionate speech Wednesday that railed against comprehensive immigration reform, Representative Michele Bachmann asked if every person under the age of 18, amidst the crowd of hundreds, could join her on the small stage outside the US Capitol. Then Bachmann hoisted up a lily-white infant. “Say hello to Terra. And say hello to America’s future,” she shouted, as the crowd went nuts. But, Bachmann quickly intoned, “little baby Terra is looking at a very different future.” This rally, organized by Tea Party groups across the country and promoted by Glenn Beck on his Internet television empire for much of the past week, is basically the GOP’s worst nightmare. As party leaders and the consultant class try to convince the Republican base, 60 percent of which opposes a pathway to citizenship, to support an immigration bill, and as people like Senator John Cornyn frame their opposition as pro-reform but concerned about border security—well, you don’t want Michele Bachmann on the Capitol lawn, holding up white babies and talking about America’s future. The Nation, 6-19-13.