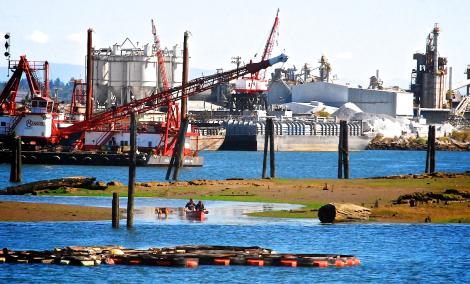 The Environmental Protection Agency is proposing a cleanup of the Lower Duwamish River Waterway which has been a heavily contaminated Superfund Site for decades. They are seeking public comment on the plan. However, the Duwamish River Cleanup Coalition says the plan falls short.

The proposed plan calls for cleanup of the most contaminated sediment and would reduce PCB contamination in the Duwamish River by at least 90 percent in conjunction with cleanups already underway at early action sites. The plan also includes an environmental justice analysis that examines the impacts of contamination on minority and low-income populations around the Superfund site. Duwamish River Cleanup Coalition Director Bj Cummings said the plan “is going in the right direction and has a lot of potential. But the problem all along has been that it does not provide adequate health protection for some of our most resource-dependent, vulnerable communities, particularly those who have any kind of cultural or subsistence relationship to the river. Fishermen and Tribes are not going to be adequately protected by the current plan.” West Seattle Herald, 3-2-13.

City Attorney Pete Holmes has forgotten more about the Seattle Police Department than Seattle Mayor Mike McGinn is likely ever to learn. McGinn should listen to, and lay off, Holmes.  Curiously, he won’t. Holmes is learning, if he didn’t already know, a lesson about reforming police departments.   A bare-knuckles effort will seek to sideline the original advocate(s) of reform:  It happened with those who blew the whistle on Seattle’s bribe-greased gambling tolerance policy in the early 1970s.  McGinn is trying it now.  Joel Connelly, Seattle P-I, 3-1-13. A parent complaint to the district about a class at the Center School resulted in Jon Greenberg, the sole senior humanities teacher, receiving a letter from the superintendent of schools. The letter instructed him to stop teaching two specific units of his humanities curriculum while they were investigated by the district: the race and gender units. This curriculum was created by Greenberg and much of it has been taught since the school opened a decade ago; it’s an integrated humanities class that teaches language arts and social studies with a heavy social justice focus. The Stranger, 3-2-13.

Helen Farrington worries about flooding on May Creek (seen at left), which runs past her backyard.

More than two decades after battles over logging in spotted-owl habitat began to die down, plans to clear-cut trees next to a county park near Issaquah have ignited a new controversy. As with most anything having to do with real estate, it boils down to location, location, location. King County officials say they want to consider buying 216 acres from the logging company that bought the land in December, but it isn’t clear they would be able to strike a deal before the chain saws go into action. Seattle Times, 3-3-13.

Backers of a bill that calls for faster regulatory review of “basic commodity transportation” projects insist the measure has nothing to do with the Gateway Pacific Terminal coal export pier proposed for Whatcom County’s Cherry Point. State Sen. Kevin Ranker (D-40) is convinced otherwise. SB 5805 would amend language in an existing law meant to encourage “projects of statewide significance for economic development and transportation.” Among other things, the amendments add language making “basic commodity transportation” projects eligible for faster regulatory review. Language in existing law orders local governments to cooperate with state officials and project proponents to speed up the regulatory process for qualifying economic development proposals. “This bill would remove Whatcom County from the decision-making process” on Gateway Pacific, Ranker says. He and and other Democratic senators filed several amendments meant to remove its potential impact on the coal terminal. The bill and the amendments are expected to be on the Senate floor the week of March 4. Bellingham Herald, 3-1-13.

Potentially lifesaving allergy medication may soon be available to more students, thanks to an agreement reached last week by lawmakers and a school-nurses volunteer professional organization that had initially opposed the proposal due to safety and legal concerns. The now-amended SB 5104, likely to be approved this session, would allow schools to stockpile epinephrine, which can be used to prevent or stop severe allergic reactions that can kill within minutes. The bill’s sponsor, Sen. Mark Mullet, (D-5) said he is happy with the compromise. Seattle Times, 3-3-13.

Some young immigrants brought to the U.S. illegally will be eligible for the state financial aid if legislation currently in the House is approved. The proposal would allow students who have been granted a special immigration status to apply for State Need Grant money – provided they also meet other state residency requirements. Rep. Zack Hudgins (D-11) sponsored HB 1817 to give those immigrants access to state financial aid. The House Appropriations Committee passed his measure Friday on a 22-9 vote. “I think we need to make sure we are keeping talent in our state,” Hudgins said. “I think we need to reward the kids that graduate from our high schools, are tied to our community, and get into our colleges and universities.” Tacoma News Tribune, 3-3-13.

Facing a deadline for passing fiscal bills, the Senate Ways and Means Committee gave approval last Thursday evening to three proposals opposed by state-employee groups. SB 5851 gives new state employees the option of entering into a 401(k)-style retirement plan. Offered by Sen. Barbara Bailey (R-10), the concept appears to be a lighter, kinder version of the one pushed by Senate Majority Leader Rodney Tom (“D”-48). The Olympian, 2-28-13, discusses all bills in its weekend wrapup.  And, in a sharply worded editorial, the Olympian (mindful that many of its readers are state employees) tells Rodney Tom “Hands off the pensions.” Olympian, 3-1-13. 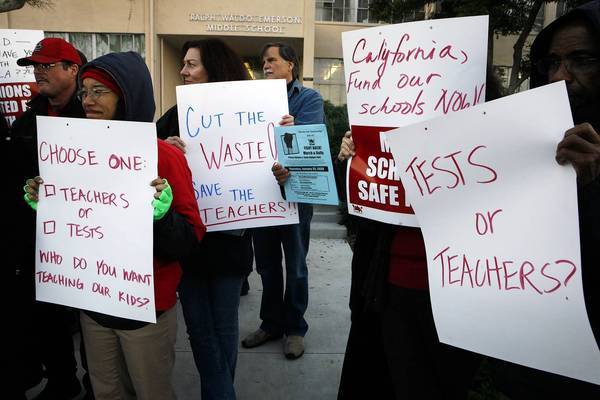 Teachers at Emerson Middle School in Los Angeles rally in 2009 to protest what they call another layer of testing. Standardized testing is on the rise in U.S. schools, but so is resistance to it in some places.

The growing use of standardized tests to assess students and teachers is sparking a push-back nationwide in what has become one of the greatest divides in educational policy. Even as the federal government and major school districts in Chicago, New York and elsewhere continue to promote testing, counter-pressure is growing to step back from it. Testing has also emerged as an issue among the major forces funding campaigns in Tuesday’s L.A. Unified school board races, which have drawn national attention and more than $4.4 million in outside funding so far — including $1 million from New York Mayor Michael R. Bloomberg to support candidates who favor using test results in teacher evaluations, among other policies. Los Angeles Times, 3-3-13. Which leads us to . . .

Los Angeles schools Supt. John Deasy isn’t on the ballot Tuesday, but you’d hardly know it, based on the undercurrent of the school board election. A coalition of local organizations, wealthy donors and L.A. Mayor Antonio Villaraigosa have decided that the election is all about keeping Deasy on the job and accelerating the aggressive policies he’s putting into place (more testing, more charter schools, more union-bashing). Los Angeles Times, 2-26-13. Which leads us to . . .

Why Are Walmart Billionaires Bankrolling Phony School ‘Reform’ In LA?

For years, Los Angeles has been ground zero in an intense debate about how to improve our nation’s education system. It’s less known who is shaping that debate.  For more than a decade, one of the biggest of the billionaire interlopers has been the Walton family, heirs to the Walmart fortune, who have poured millions into a privatization-oriented, ideological campaign to make LA a laboratory for their ideas about treating schools like for-profit businesses, and treating parents, students and teachers like cogs in what they must think are education big-box retail stores. Billmoyers.com, 3-2-13.

Conservatives like to say that their position is all about economic freedom, and hence making government’s role in general, and government spending in particular, as small as possible. And no doubt there are individual conservatives who really have such idealistic motives. When it comes to conservatives with actual power, however, there’s an alternative, more cynical view of their motivations — namely, that it’s all about comforting the comfortable and afflicting the afflicted, about giving more to those who already have a lot. And if you want a strong piece of evidence in favor of that cynical view, look at the current state of play over Medicaid. Paul Krugman, New York Times, 3-3-13.

The U.S. and 10 other countries are negotiating our next big trade agreement, called TPP. It’s time to re-examine what works and what doesn’t work. Imagine a thought experiment, where we put environmentalists in each country in charge of negotiating the next trade agreement. Preposterous! I know. Stick with me. This is a thought experiment. Our environmental negotiators will grant other countries favorable access to our economy, on the condition that they endorse sustainable environmental practices and agree to abide by international standards for fishing, access to fresh water, and carbon reduction and whatever other green provisions we can negotiate. And there’s more. Stan Sorscher (46th District Democrats), Huffington post, 2-19-13.