The Seattle City Council voted Monday to require  that at least 50 percent of all food sold from vending machines on city property be “Healthier” or “Healthiest” food selections under vending guidelines set down by Public Health of Seattle and King County. “This is one way we can support healthy and productive city employees:  City employees will now have more opportunities to consume more nutritious food and beverages while at work,” said Councilman Richard Conlin, long an advocate that the city have a food policy. Seattle has acted, in recent years, on matters ranging from a ban on plastic bags in grocery stores to the sale of wholesome foods (And the circus animals! How can we forget the circus animals?).  Supporters say it’s serving the public good and planet earth.  Critics have argued that the Emerald City is becoming a “Nanny State” with intrusions that drive its citizens up a wall. Seattle P-I, 3-4-13.

Center School students to protest suspension of class on race

A required class on race was suspended at a Seattle public school just two weeks before it was scheduled to end. The Center School class was stopped last Monday on orders from School Superintendent Jose Banda after a student said teacher Jon Greenberg had created an intimidating environment. Several students were galvanized by what they contend is an injustice, and they plan to take the cause directly to the School Board when it meets Wednesday. “We have a union contract that guarantees and protects academic freedom,” Center School teacher Gerardine Carroll said. “We don’t feel that academic freedom is being protected right now.” KIRO-TV, 3-4-13.

IAM 751 member Nancy Collette votes on ratification of a contract at Hytek Finishes in Kent.

Machinists Union members at Hytek Finishes in Kent have narrowly approved a new improved four-year contract. The Machinists approved the contract with a 52-percent “yes” vote Thursday, less than a week after they had voted by a nearly 3-to-1 margin Saturday to reject the company’s previous contract offer and authorize a strike. The second contract needed only a simple majority for approval. The second contract provides greater flexibility to for members to divert money into a health savings account to help pay for the company’s high-cost health care plan, said Kevin Cummings, the union’s lead negotiator. It also retains one of the strongest portions of the original offer: a new wage schedule that raises minimum pay for Hytek workers and provides them a clear path for future raises and promotions. IAM 751 Blog, 3-1-13.

Shari Song has entered the race for Metropolitan King County Council, District 9. The seat is now held by Republican Reagan Dunn. Song, a Realtor with Prudential Northwest Associates, was a founding member and three term president in the Korean American Professional Society, and a board Member of the Korean American Chamber of Commerce. She lives in Bellevue. (Song’s campaign website has no information, just a placeholder, and her political views are nowhere to be found as of posting.) Bellevue Reporter, 3-4-13.

Rich Wagner to run for re-election to Auburn City Council

Rich Wagner announced last week that he will run for re-election to the Auburn City Council. Wagner, a retired research engineer and a six-term council member, said he is known for being “financially conservative” and as “a source of common sense new ideas” for improving City government. Rich and his wife, Kay, have lived in Auburn for 35 years, raising four children. Rich’s mother, Beth, 101 years old and in good health, also lives in Auburn. Auburn Reporter, 3-3-13.

The Seattle School District wrapped up its MAP testing last week, despite a boycott by teachers and students at Garfield High and several other schools. Teachers who refused to give the test, claiming it was a waste of time and money, are now waiting to hear the consequences. Early in the boycott, the district warned of a possible 10-day suspension to “insubordinate” teachers–but that was before the protest caught fire nationally, generating support among schools from coast to coast, and getting airtime on the Dan Rather report. Now, the legislature is getting in on the action. Rep. Mike Hope (R-44) has introduced HB 1293, which would require school districts each year to tell parents how much time each test would take, whether the test is required by the state or federal government, the impact of test scores for students and — perhaps most interesting — how much the tests cost. (The bill has strong bipartisan cosponsorship and support of the Washington Education Association.) Seattle Weekly, 3-1-13.

It took Nathan Schlicher two weeks to gain seniority in the Washington State Senate. Moving quickly through a process is a familiar pattern for Schlicher (pronounced “shlick-er”), who graduated from Central Kitsap High School at 14 and had licenses to practice law and medicine a decade later. At 30, Schlicher (D-26) believes he is the youngest senator in the chamber. Being youngest was another role he grew accustomed to as a student. “From my perspective it was normal,” he said.  Schlicher was appointed in January to replace former 26th Legislative District Sen. Derek Kilmer, who left state politics for a seat in Congress. Schlicher took office on Jan. 21. Kitsap Sun, 3-2-13.

4 in Congress back bill to halt removal of wilderness lookout

Lawmakers are pushing to protect the Green Mountain forest fire lookout and establish federal wild-and-scenic status for Illabot Creek, both in the Mount Baker-Snoqualmie National Forest. Four members of Washington state’s congressional delegation — Democratic U.S. Sens. Patty Murray and Maria Cantwell and Democratic Reps. Suzan DelBene and Rick Larsen — introduced legislation this past week. The legislation comes after a Montana-based group filed a lawsuit against the U.S. Forest Service for using a helicopter and machinery to repair the lookout, which it claimed violated the federal Wilderness Act. The Forest Service maintained that the lookout’s historical significance made it an allowable project. As a result of the lawsuit, the U.S. District Court in Seattle ordered the Forest Service to remove the lookout from the 6,500-foot mountain. Everett Herald, 3-4-13.

A bill sponsored by State Sen. John Braun (R-20) to privatize the state-run workers’ compensation program failed to get out of committee and is likely dead this session, according to Senate Republicans. SB 5675 was referred to the Senate Commerce and Labor Committee but never was put to a vote. Last Friday was the deadline for bills to receive Senate approval so they can move to the House. Braun’s proposal faced opposition from labor groups and Democratic Gov. Jay Inslee. Longview Daily News, 3-4-13. Congressman Paul Ryan uses his “Good, Bag, and Ugly” chart to point out shortcomings in President Obama’s proposed budget in 2009. Ryan plans to unveil the GOP budget next week and put it to a vote in the House before the Easter break.

Anxiety is rising among House Republicans about a strategy of appeasement toward fiscal hard-liners that could require them to embrace not only the sequester but also sharp new cuts to federal health and retirement programs. “I know a number of people who have real concerns about where this is going,” said Rep. Peter T. King (R-NY), who said Medicare cuts targeting people as old as 58 are under discussion. “One of the last presidents to balance the budget was Herbert Hoover,” King added darkly, referring to the penny-pinching Republican blamed for deepening the Great Depression. Washington Post, 3-4-13.

White House reiterates its support for cellphone unlocking. Now what? 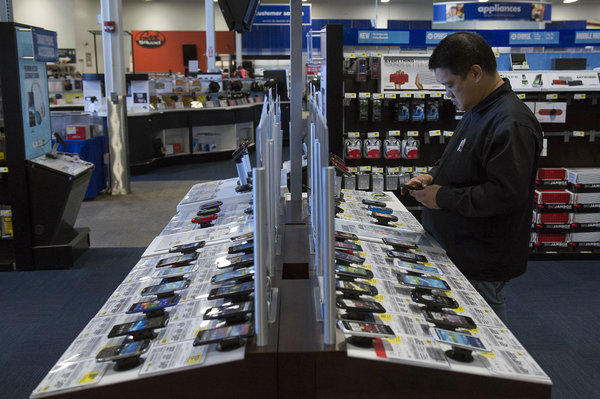 A shopper views mobile phones at a Best Buy store in San Francisco. The White House threw its support Monday behind a petition calling for consumers to be allowed to circumvent the digital locks that tie their mobile devices to a single network.

The White House drew plaudits from Internet advocacy groups Monday for supporting a petition to make cellphone unlocking legal. But consumers shouldn’t get their hopes up about being free to use cheaper foreign SIM cards overseas or selling their unlocked used smartphones on eBay. The Obama administration had already taken a strong position in favor of cellphone unlocking, and it’s not clear what, if anything, changed with Monday’s action. Los Angeles Times, 3-4-13. Jerry Falwell Jr., president and chancellor of Liberty University, introduces the convocation speaker at the Vines Center on Feb 13, 2013, in Lynchburg, VA.

The small Baptist college that television preacher Jerry Falwell founded in 1971 has capitalized on the online education boom to become an evangelical mega-university with global reach. In the almost six years since Falwell’s death, Liberty University has doubled its student head count — twice. Total enrollment now exceeds 74,000, with nearly 62,000 working toward degrees online in fields such as psychology, business, education, criminal justice and, of course, religion. That makes Liberty the largest university in Virginia — and the largest private, nonprofit university in the country. With a slogan of “training champions for Christ,” Liberty also is the nation’s largest university with a religious affiliation. Washington Post, 3-4-13.

The state Senate’s Majority Coalition Caucus might be eager to reimpose the two-thirds-for-taxes rule the Supreme Court lifted from the Legislature last Thursday, but it ain’t gonna be easy. Members of the Republican-leaning majority caucus are pondering a internal rules change that might accomplish the same thing, by requiring a two-thirds vote of the upper chamber for any bill that raises taxes. Lt. Gov. Brad Owen says it’s a bad, bad idea, and the most obvious way of going about it would run afoul of the state constitution. A detailed examination from Washington State Wire, 3-4-13.