Wage war: Is Seattle the next battleground for $15 minimum? Council, voters are likely to act in 2014

One way or another, Seattle voters will be asked to approve a $15-an-hour minimum wage next November. And the whole nation will be watching. “There is a lot of momentum,” says Seattle City Council member-elect Kshama Sawant after her stunning come-from-behind victory over incumbent Richard Conlin. An avowed socialist, Sawant made a $15 minimum wage the centerpiece of her campaign, and it is fair to argue that Sawant’s surprising victory was at least in part a proxy vote on her signature issue: “We are in a position to get something in 2014,” Sawant predicts, “because the [$15 minimum wage] issue is so alive in people’s minds.” The Stranger, 12-1-13. 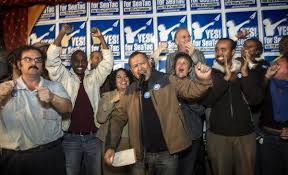 SeaTac has proved that the sources of surprise in American politics since the Great Recession are not limited to Tea Party rabble-rousing. The grassroots left, which seemed scattered and demoralized after the Occupy movement fizzled, has revived itself this year—with help from union money and professional canvassers—by rallying voters around the argument that anyone who works full time ought not to be at risk of poverty. Minimum wages do not create new “entitlement” programs or otherwise enjoin the country’s sterile debates about the value of government. They are designed to ensure that the dignity of work includes true economic independence for all who embrace it. New Yorker, 12-1-13.

Governor Jay Inslee and his budget writers at the Office of Financial Management have received piles of requests for line items, many of which may not be filled, because the state’s financial situation isn’t much different than in June ,when Inslee signed a new two-year budget. “There’s not going to be a lot of money,” said David Schumacher, director of the Office of Financial Management. “There will be very few new items.” As a result, the supplemental spending plan Inslee will put out the week of Dec. 16 is expected to make small adjustments in agency budgets and not be laden with expensive initiatives. Lawmakers will consider Inslee’s proposal in the 2014 session. Everett Herald, 12-1-13.

House Transportation Chairwoman Judy Clibborn (D-41) can tell when people think there’s a real chance the Legislature might pass a multibillion dollar transportation-tax package: New requests for projects start pouring in. Clibborn said she was besieged when state lawmakers met recently for committee hearings. “I probably had $500 million to $1 billion of new projects proposed,” she said. People would tell her: “You know, I kind of like the project I have in the package, but for just another $200 million, you could do this. I’d say, ‘You’re the fifth person who’s said that.’ ” While her experience may signal hope for a tax package, negotiators still—after almost a year of talks—have not overcome a partisan divide over issues including stormwater treatment, sales taxes collected from transportation projects, and funding for public transit. Seattle Times, 12-1-13.

School dollars are not the only education issue in Olympia

Education will be a focus when the Washington Legislature convenes in January, but money won’t be the only issue on the table. Lawmakers must also bring the state’s teacher evaluation system up to federal standards, or risk losing a waiver from the No Child Left Behind law. The Superintendent of Public Instruction believes the problem centers on one three-letter word in state law. The new teacher evaluation law requires student growth data—test scores or other measures of student achievement over time—to be part of teacher evaluations, but it gives school districts some flexibility about where they choose to get that data. The Washington law says statewide test scores can be a factor in teacher evaluations. The federal government wants the word “can” to be changed to “must” or Washington will not meet its requirements for a waiver from the federal education law, according to Superintendent of Public Instruction Randy Dorn. Associated Press (Longview Daily News), 12-1-13.

A small crowd of Democrats is lining up for a chance to fill John McCoy’s 38th District seat in the state House, with a decision anticipated next week. Six people are reportedly seeking the job which opened up following McCoy’s Nov. 27 appointment to the state Senate. He’s taking former state Sen. Nick Harper’s place. June Robinson, Jennifer Smolen, Ed Triezenberg, Kelly Wright, David Simpson and Ray Miller are working to corral support from Democratic precinct committee officers, who will meet Dec. 10 to vote on their top three choices for the post. That meeting is scheduled for 7 p.m. at the Labor Temple in Everett. Everett Herald, 12-2-13.

Almost two years after the state ordered the formation of a Groundwater Management Area to find solutions to the Lower Yakima Valley’s nitrate pollution problem, the committee in charge is still debating how to proceed. Committee members say ongoing litigation between an environmental group and five dairies over allegations of manure pollution has created an environment more like a civil war or a live fire exercise than consensus and cooperation. Researchers need information from farmers to understand what’s causing nitrate pollution and to find solutions, but the farmers fear if they cooperate with studies, that data could be used against them in future lawsuits. Yakima Herald-Republic, 12-1-13.

On the evening of Oct. 7, Christopher Clifford entered the public eye locally when he stood at a microphone and delivered an impassioned speech to Clark County legislators that drew a round of applause from a crowd of some 200 people. “They have too much,” Clifford said of the Washington State Department of Transportation, and how he believes the agency has blundered away public money. “They don’t have a money problem, they have a spending problem.” Clifford spoke his piece to a bipartisan gathering of state legislators interested in hearing citizen views on state transportation spending. Among the legislators was his new boss, state Sen. Don Benton (R-17), who now employs Clifford in Clark County’s environmental services department as an environmental compliance coordinator. Like Benton, Clifford lacks experience working for an environmental or regulatory agency. Looking at Clifford’s background reveals the man Benton hired is indeed a long-time activist who has cast his gaze to environmental and open government issues. Columbian, 11-30-13.

In 2012, Democrats snagged Senate seats from Republicans in states where the GOP should have prevailed with relative ease. In 2014, Republicans want to show they can play that game, too. The GOP could conceivably capture the Senate by winning in seven states currently represented by Democrats but that Mitt Romney carried. But running the table in those states is a very tall task, party strategists freely acknowledge, so they’re working to expand the map of competitive races to states like Iowa, Michigan, Colorado, and several others. If Republicans can mount strong campaigns in purple and even some blue states, it could allow them to capitalize on an anti-Obamacare electoral wave if one forms—or, short of that, force Democrats to spend precious dollars they’d rather devote to the true battleground races. Politico, 12-1-13.

For more than two years, President Obama has endorsed reducing Social Security payments as part of an ambitious deal to tame the national debt. But then Sen. Elizabeth Warren (D-MA)—viewed by supporters on the left as a potential 2016 presidential candidate—embraced a far different proposal: increasing benefits for seniors. As Obama struggles to achieve his second-term domestic agenda, a more liberal and populist voice is emerging within a Democratic Party already looking ahead to the next presidential election. The push from the left represents both a critique of Obama’s tenure and a clear challenge to Hillary Clinton, the party’s presumptive presidential front-runner, who carries a more centrist banner. The left’s influence will be on display in coming weeks when a high-profile congressional committee formed after the government shutdown faces a deadline to forge a budget agreement. Under strong pressure from liberals, the panel has effectively abandoned discussion of a “grand bargain” agreement partly because it probably would involve cuts to Social Security. Washington Post, 11-30-13.

The Bay Mills tribe wanted to open a casino in Vanderbilt, a tiny town about 50 miles south of the Mackinac Bridge.

A small, shuttered casino in a tiny Up North town is at the center of a case coming before the U.S. Supreme Court Monday that could redefine when American Indian tribes can be sued, and under what conditions. A decision — if the court makes one — could affect all sorts of commercial activities taken by tribes, from casino gambling to payday lending, and give state governments more leeway to sue Indian groups. As it stands now, the federal government can file suit against a tribe, but states are largely barred from doing so unless a tribe has either agreed to waive its sovereign immunity or had it abrogated by Congress. But the Michigan Attorney General’s Office is arguing that immunity shouldn’t stop its suit to block the Bay Mills tribe from opening a casino outside tribal lands, because the federal government has, so far, declined to act. Detroit Free Press, 12-2-13. 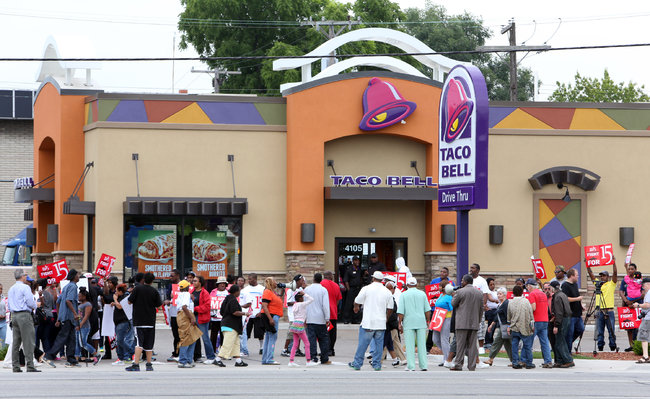 Protesters outside a Taco Bell in Warren, Mich., in July. Many fast-food restaurant workers say they earn too little to live on.

Seeking to increase pressure on McDonald’s, Wendy’s, and other fast-food outlets, organizers of a movement demanding a $15-an-hour wage for fast-food workers say they will sponsor one-day strikes in 100 cities on Thursday and protest activities in 100 additional cities. As the movement struggles to find pressure points in its quest for substantially higher wages for workers, organizers said strikes were planned for the first time in cities like Charleston, S.C.; Providence, R.I.; and Pittsburgh. The fast-food effort, backed by the Service Employees International Union, is also demanding that restaurants allow workers to unionize without the threat of retaliation. New York Times, 12-1-13.

Last week, a Michigan-based group calling itself the Mackinac Center for Public Policy asked us to publish an opinion piece about the pitfalls of higher taxes on cigarettes. It was a nicely written op-ed and made good points, but we had one big problem with it: We were unfamiliar with the Mackinac Center and, when we asked, they would not say who pays their bills. How could we possibly publish their op-ed railing cigarette taxes when, for all we knew, they secretly were paid by the tobacco industry? “It’s not exactly a partisan issue, but it’s a wealthy person issue,” David Morrison, deputy director of the Illinois Campaign for Political Reform, told us. “Who has the resources to put their money into something like this? They say they want to protect their members, but the reality is they may have a very small number of members. They’re trying to create the impression of a movement.” Let’s start our own movement: Reveal your sugar daddies or move along. Chicago Sun-Times, 11-25-13.