Immigrants rights advocates were celebrating Monday after the King County Council narrowly passed an ordinance that says the county can ignore certain requests from federal immigration agents. Under the new law, the county narrows the criteria under which it will honor requests from Immigration and Customs Enforcement (ICE) to “hold” people in county jails past their release dates while ICE assesses whether to deport them. “This ordinance sends a clear message that King County will no longer collude in funneling its residents into an unjust deportation system,” said Ann Benson of the immigrants rights group One America. Proposed by Council member Larry Gossett this summer, the ordinance was supported by local police (including King County Sheriff John  Urquhart) who say it will encourage immigrants report crimes without fear of being detained. The Stranger, 12-2-13.

Fast food workers will strike for a living wage in 100 American cities Thursday, but low-wage workers in the Seattle area have opted instead to march from SeaTac into downtown Seattle in support of a $15 an hour minimum wage. “There is a moment when hope is possible:  The minimum wage vote in SeaTac, and the commitment of Seattle’s mayor-elect to lead a dialogue on a $15 an hour minimum wage has put the emphasis here on government,” said David Rolf, president of Service Employees International Union local 775. The “long march” on Thursday will begin at 9 a.m. outside the SeaTac Hilton, and be led by airport workers.  It will proceed down International Boulevard, move onto Martin Luther King Way, and then take Rainier Avenue South into Seattle.  Led by fast food workers in its last stage, it will culminate at Seattle City Hall with a 4:30 p.m. rally. Seattle P-I, 12-2-13.

Two Seattle ballot measures seeking to shake up City Council elections fared quite differently at the polls. The proposal to elect most Council members by geographic districts—Charter Amendment 19—won big throughout the city. An analysis of precinct vote returns by The Seattle Times’ Justin Mayo shows the districts measure lost in only five of Seattle’s 952 precincts. The proposal received nearly 66 percent support citywide. The result was a surprising turnaround for Seattle, which had repeatedly rejected similar measures in the past. Seattle Prop. 1, which would have enacted a public-financing system for City Council candidates, failed narrowly — the ‘no’ side won just 50.4 percent of the vote. Seattle Times, 12-2-13. A resident checks out the new site

Central District residents around 22nd and Cherry got some new neighbors Monday as a third Nickelsville encampment for homeless people moved to the Central District. Neighbors in the area received notices at their doors over the weekend informing them of the relocation of the Skyway Nickelsville Neighborhood Encampment to 612 22nd Avenue. The Skyway encampment will be hosted by the Cherry Hill Baptist Church, located across East Cherry Street from the lot where the group will now camp. The notice says that the encampment will have about 35 residents, with the potential for up to 70 people to stay on site. The notice also says that the residents “will be moving to other property within three months.”  Central District News, 12-2-13.

Judy Sather, a nurse at Valley Hospital, writes slogans as she and other union members prepare picket signs Monday for a possible one-day strike at Deaconess and Valley hospitals.

A one-day strike looms Wednesday at Deaconess and Valley hospitals after contract negotiations with nurses and other workers failed. It would be the first strike in Spokane by hospital nurses in decades–perhaps ever. As the 1,100 unionized health care workers prepare to walk out at 6 a.m. Wednesday, hospital administrators say they are ready to keep the hospitals open for the day with teams of  scabs across all departments. Agreement on staffing levels continues to divide the sides. Registered nurses at Valley Hospital have been working without a contract for a year. Teri Nicholson, a registered nurse with 36 years of experience between the two hospitals, said the hospitals use a staffing matrix based on the company’s nationwide network of hospitals rather than comparing staffing models to regional hospitals. Both hospitals are owned by Tennessee-based Community Health Systems. Spokesman-Review, 12-3-13.

No deal on transportation as talks continue

Gov. Jay Inslee and lawmakers from the House and Senate negotiated for four hours in Seattle Monday but did not reach agreement on a multibillion-dollar transportation package. Talks will continue Tuesday in Olympia. Representatives of all four caucuses are taking part in the negotiations which have been going on in fits and starts for most of the year. Two significant policy issues divide the two sides. The Senate majority is pushing to redirect sales tax collections on transportation projects away from the general fund and into the roads budget, and to divert dollars from a fund used to clean up toxic sites into making stormwater improvements. House Democrats don’t like either idea. A third issue is how much of the $10 billion to $12 billion package is spent on bus services, bike paths, and sidewalks. House Democrats are pushing to spend far more in these areas than the Senate majority. Everett Herald, 12-2-13.

The field of contenders for Democratic state chair grew to five Monday, as the party’s longtime executive director Jaxon Ravens declared his candidacy. “At its core, the role of state party chair is about relationships,” said Ravens, who has had more than a decade to develop ties with state Democrats, and before that was executive director of the King County Democratic Party. The job opening has produced a strong field.  Another former executive director, Jim Kainber, is running.  So is Jay Clough, who ran a losing campaign against U.S. Rep. Doc Hastings, R-Wash., in 2010. Nancy Biery was a top aide to Sen. Maria Cantwell, D-Wash., and then-Gov. Gary Locke.  Biery has been party chair in the Democratic bastion of Jefferson County on the Olympic Peninsula. Completing the field is Dana Laurent, who has worked Planned Parenthood Votes, currently heads the Win/Win Network promoting progressive Democrats, and successfully recruited precinct chairs in the 36th District.  She has backing from the Boeing Machinists and former State Senate Majority Leader Lisa Brown of Spokane. Seattle P-I, 12-2-13.

Starting in January, employers in Washington face an average 2.7 percent hike in workers’ compensation insurance premiums, the first increase in three years, the state Department of Labor and Industries said Monday. The rate hike is part of a plan to ensure predictable rates that benchmark against wage inflation, according to L&I. The agency expects the increase to bring about $55 million in additional premiums next year. At 2.7 percent, the L&I premium increase is an average for all Washington employers. Individual employers could see rates go up or down, depending on recent claims and changes in the frequency and cost of claims in their industry. Columbian, 12-2-13.

How Iowa became a lab for conservative attacks on judges 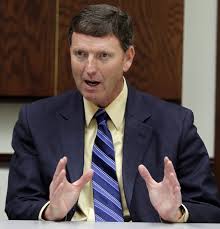 Blocking presidential nominees is nothing new—though the Herculean efforts of the GOP to block nearly every appointee during Obama’s tenure is ripe to become legend. But in our hyper-politicized society judicial appointments are particularly contentious. Increasingly, so are judicial retention votes, which means that after judge is appointed, the citizenry gets to vote periodically to retain or dismiss a judge. A majority of states have retention votes. Until recently, these votes have gotten little to no attention by the press, let alone discussion around the kitchen table. Then, in 2010, one powerful Christian political group in Iowa made targeting so-called “activist” judges part of its mission. The Family Leader (TFL) headed by Bob Vander Plaats, whose name has recently been floated as a possible contender for the Republican nomination for Senate, launched an aggressive and ultimately successful campaign to oust three Iowa Supreme Court Justices after these three judges ruled in favor of marriage equality, making Iowa one of the first states to allow same-sex couples to marry in the state. Talking Points Memo, 12-2-13.

A Democratic free-for-all for Pennsylvania governor

As Pennsylvania Gov. Tom Corbett’s approval ratings sink lower, no fewer than eight Keystone State Democrats—with potentially more to come—have thrown their hats in the ring to take him on. With no clear front-runner in the crowded field and one candidate pledging to drop $10 million on the primary, the May contest to choose the Democrats’ challenger to Corbett has the potential to become the most competitive, costly and contentious Democratic primary of 2014. If the eventual nominee emerges from the free-for-all damaged and short on cash, it could be Corbett’s only hope of survival. Already on the long list of candidates are Rep. Allyson Schwartz; state Treasurer Rob McCord; businessman Tom Wolf; former state environmental protection secretary Katie McGinty; Allentown Mayor Ed Pawlowski; John Hanger, another former state environmental protection secretary; Lebanon County Commissioner Jo Ellen Litz; and businessman Max Myers. Politico, 12-2-13.

While lawyers dismantle many restrictions on political money, the rules affecting Morning Edition and Downton Abbey still stand tall. A federal court in San Francisco says public radio and TV stations cannot carry paid political ads. The 8-3 decision Monday by the 9th Circuit Court of Appeals reversed a ruling last April by a smaller panel of the court. NPR and PBS both joined the case as friends of the court. The court upheld the decades-old bar against political ads on public broadcasting stations, even as other restrictions have vanished over the years. One long-gone rule held that funders could only be listed by name. KUOW, 12-2-13.

Republicans’ self-hatred swells: The GOP vs. its own base

Does any modern political party besides the GOP hold a huge segment of its base in contempt? I’ve written a lot about how Republicans have failed to make inroads with Latinos, young voters or women since their 2012 defeat, but what’s really interesting is the way they continue to deride many of their older white working-class voters, too. When Mitt Romney insulted “the 47 percent” of Americans who pay no federal income taxes, he failed to notice that the vast majority of them are white, most of them white seniors, the most reliably Republican voters in the country. A large portion of the people Paul Ryan describes as “takers”–vs. productive “makers”–are likewise older whites. And although Ryan and his party want to turn Medicare into a voucher program–run by exchanges, much like the Affordable Care Act–they tried to hide that fact during the 2012 race because it was hugely unpopular with their base. Joan Walsh, Salon, 12-2-13.