In America, hard work and success should be rewarded. But this week an American company experiencing soaring profits, stock prices at an all-time high, and decades worth of back orders for its high-quality union-made products, did exactly the opposite. Boeing gave its workforce a take-it-or-leave-it ultimatum: sacrifice your pensions and accept wage and benefit cuts, or we’ll build our next jet in some other state. Machinists (IAM) union members at Boeing rightly rejected that attempt at extortion — despite enormous public pressure from Boeing executives in Chicago and politicians here in Washington — and now those of us in the community must stand beside them and demonstrate our support for their decision. Please make plans to attend a Community & Labor Rally on Monday, Nov. 18 at 4 p.m. at Westlake Park in downtown Seattle to show our support for the IAM District 751 members who rejected Boeing’s ultimatum to eliminate their pensions and cut their wages and benefits. The Stand, 11-14-13.

Having earlier torn up Boeing’s contract offer, local Machinists President Tom Wroblewski, second from right, was back on a neutral message as officials gathered Monday for a signing of 777X incentive legislation. Seen with Wroblewski, from left, were Sen. Patty Murray; Boeing executive Ray Conner, and Gov. Jay Inslee.

Boeing’s Machinists union went into Wednesday’s crucial 777X decision deeply divided on whether the company’s contract proposal even deserved a vote. The union’s national leaders pushed the vote through despite an emotional confrontation with local staff and officials just days earlier, according to people who were present. Tens of thousands of jobs in the state building the planned 777X jetliner and its advanced wing were resting on that vote. Yet after the resounding rejection of the offer, the local union leadership remains bitterly split, immensely complicating any reopening of talks with Boeing to salvage the eight-year deal. Seattle Times, 11-17-13.

Meanwhile, Boeing rakes in $101.5B in orders at Dubai Air Show

Boeing Chairman, President, and CEO Jim McNerney (third from left) presents a 777X model in Emirates livery to Sheikh Ahmed bin Saeed Al Maktoum, chairman of Emirates Airline, during a ceremony for the official launch of the 777X at the Dubai Air Show.

Boeing Sunday launched the 777X program at the Dubai Air Show in the United Arab Emirates in spectacular fashion, monetarily speaking, with 225 announced firm orders and commitments for the new plane. The company also announced commitments for 117 other aircraft, including 787s and 737s. In all, the day’s 342 announced firm orders and commitments represented $101.5 billion in sales at list prices, Boeing said.A firm order indicates a contractual obligation. A commitment is an expressed intent to buy. Airlines typically buy planes at a negotiated discount from list prices. Everett Herald, 11-17-13.

As of Saturday, City Council member and Deputy Mayor Nancy Backus held the edge over her fellow Council member John Partridge by 130 votes in the combined totals of King and Pierce County. Backus, hoping to be Auburn’s first female mayor, has received 6,631 votes so far in the combined total of King and Pierce counties, 50.49 percent, to Partridge’s combined 6,501, votes, or 49.51 percent. In King County, however, Partridge leads Backus by 172 votes. Backus’ bulwark continues to be the Lakeland Hills section of Auburn in Pierce County, where she has a 302-vote lead. Partridge would need more than 70 percent of the remaining votes to prevail. Auburn Reporter, 11-17-13.

Kshama Sawant’s victory is also about a larger Seattle sea change around growing inequality. Kshama Sawant’s $15 minimum wage platform and demand that we address Seattle’s growing inequality reflected the urgency felt by working people of all races across the city. Her lack of corporate money and her passionate grassroots campaign resonated with a voting public that is increasingly uncomfortable with the city’s lack of affordability and growing corporatism. Pramila Jayapal, Crosscut, 11-18-13.

As the Pierce County Council prepares to approve its 2014 budget Tuesday, a late addition to the expenses list is raising legal and ethical concerns. Amendments installed last Tuesday by all councilors to fund at-risk youth programs include $7,000 to Child Evangelism Fellowship, described on its website as a “Bible-centered worldwide organization that is dedicated to seeing every child reached with the Gospel of the Lord Jesus Christ, decipled and established in a local church.” The money would go towards renting space at local fairs, according to the director of the Pierce County chapter, Marlene Stoll. “We just want to push God’s love for us and how it can make a difference in our life,” Stoll said Saturday night. The question is over the legality of the contribution.  While governments often contribute to faith-based organizations for things like homeless shelters and food kitchens, the federal and state constitutions specifically prohibit taxpayers paying for “instruction of any religious establishment.” KING, 11-17-13.

It looks like Democrats in the Legislature are ready to take shots at one of the vestiges of Tim Eyman’s Initiative 960, which the courts found had unconstitutional elements. Still standing is the provision requiring that tax laws enacted by the Legislature go onto the fall ballot just to see what they think. The votes are not binding, and voters affirmed three of five such tax questions this year. Rep. Sam Hunt (D-22) is drafting legislation to repeal the advisory vote requirement on grounds it is confusing and costs money. Hunt, who chairs the House Government Operations and Elections Committee, said he plans a work session on the repeal idea at 10 a.m. Friday Nov. 22 in Olympia. Hunt said Saturday that Sen. David Frockt (D-46) has agreed to sponsor his measure in the Senate. Olympian, 11-16-13.

State Rep. Gary Alexander (R-2) is keeping his campaign promise to leave the state House and he said it’ll be “effective Dec. 31.” Alexander had pledged before the August primary election that he would step down at year’s end whether he won or lost his bid for Thurston County auditor. Mary Hall, a Lacey Democrat who works as elections supervisor in Pierce County, narrowly beat Alexander for the auditor’s job. With few ballots left to count as of Sunday, Hall led by 723 votes, or barely 1 percentage point. Alexander is in his ninth term in the House. He  previously served a term as Port of Olympia commissioner. He also served several years as deputy county auditor before being appointed county auditor in January. He filled the auditor vacancy created when Kim Wyman left the post to become secretary of state. Olympian, 11-17-13.

Pasco might ask residents to weigh in on records request debate

Debbie Clark, Pasco city clerk, inspects a box of city council agenda packets that Franklin County resident Roger Lenk has requested to examine. Since July 2011, Lenk has requested 120,000 pages of documents from the city. To meet those requests, the city has used 900 hours of staff time, costing $46,800.

Pasco is considering asking its residents if it should push for something that is now against the law. A proposed question on Pasco’s community survey, which it sends out every two years, would ask residents about limiting public records requests. The question acknowledges most requests are specific and limited in scope, but adds that some people “have used the system to make burdensome or harassing requests for huge volumes of non-specific documents.” The broad and onerous requests consume huge amounts of staff time and are expensive for taxpayers, city leaders say. Tri-City Herald, 11-16-13.

Sunday Spin: Right-to-work in the soviet of WA?

Somewhere in the great beyond, James “Big Jim” Farley is having a good day. The former Tammany Hall boss and political strategist for Franklin Delano Roosevelt may have been pulled out of celestial poker game late last week when word drifted heavenward about a press release from state Sen. Mike Baumgartner (R-6). The Spokane Republican came up with a solution to the fix Washington could find itself in after Boeing’s union machinists voted down a contract extension that would have guaranteed the 777X be built in the state. Call a special session to turn Washington into a “right-to-work” state, Baumgartner said. Such a suggestion must’ve made Farley spit out his cigar, if smoking is allowed in whatever suburb of the afterlife old pols inhabit. Jim Camden, Spokesman-Review, 11-17-13.

In many states, the recovery is making the income gap worse A foreclosed home in Texas

The income gap in America has been widening for decades and the modest three-year recovery did little to change that, according to new Census data. The new data suggest that despite modest recoveries in many states, the middle class has been shrinking while households have been added in the lowest and highest income brackets. In many states and nationally, the highest income brackets saw more growth than the lowest, but households in the middle brackets continued to decline. The state-by-state data compare incomes from a pair of three-year periods: 2007 through 2009, a span that included the Great Recession, and 2010 through 2012, a period that included the ongoing and modest recovery. Washington Post, 11-18-13.

As VW talks to UAW, southern GOPers fear the end of cheap labor

A Passat on the assembly line at Volkswagen’s Chattanooga plant

A top Volkswagen labor official says a pending decision about union representation for workers at the automaker’s lone U.S. plant will have no bearing on whether the company will decide to add the production of another vehicle there. The world’s third-largest automaker, which is mulling whether to make a new SUV in Mexico or Tennessee, shocked Southern union foes by engaging in talks with the United Auto Workers about creating a German-style “works council” at the Chattanooga plant. Southern politicians say they fear a successful UAW organization of the Volkswagen plant would hurt the region’s ability to attract future investment, and that it could lead to the spread of organized labor to other foreign car makers. But labor leaders like Bernd Osterloh, head of the Volkswagen’s global works councils and a member of the company’s supervisory board, stress that the Chattanooga plant is alone among major Volkswagen facilities around the globe in that it does not have formal worker representation. Associated Press (via the Contributor), 11-15-13.

The Senate is careening down a path toward yet another war over the filibuster. With Republicans set Monday to block Robert Wilkins’ nomination to the D.C. Circuit Court of Appeals, both parties’ positions appear hopelessly intractable. The only thing that may be able to preserve the GOP’s ability to filibuster judicial nominees is another extended battle over the Senate rules that forces a truce between the caucuses of Senate Majority Leader Harry Reid (D-NV) and Minority Leader Mitch McConnell (R-KY). Reid and his leadership team insist that setting up a string of votes on judges to the key court is not about forcing a change to the Senate’s rules by a majority vote — that is, implementing the so-called nuclear option. Instead, top Senate Democrats say approving new judges to three vacancies on the D.C. Circuit is just part of the chamber and President Barack Obama’s constitutional duty. But Republicans’ continued rejection of those judicial nominees means a nuclear option fight could await nonetheless. Politico, 11-17-13.

Meet the computer geek who took on Ken Cuccinelli—and won 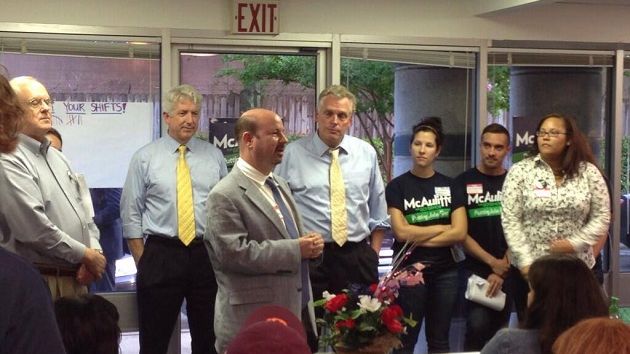 For climate researcher Michael Mann, the last few weeks have hardly been average ones in the life of a scientist and university professor. On October 30, Mann introduced Bill Clinton at a campaign rally for Terry McAuliffe in Charlottesville VA. A few days later, he listened as President Obama, also campaigning for McAuliffe in Virginia, brought up Mann’s high-profile struggles with McAuliffe’s gubernatorial opponent, Virginia Attorney General Ken Cuccinelli. Not exactly average—but then, as MSNBC’s Chris Hayes put it when interviewing Mann back in August, “You didn’t come to politics, politics came to you.” Mann explains, “The last thing I ever wanted to do was to get involved in politics, to me that was anathema.” But “because of the situation I found myself in,” Mann continues, “I ultimately did grow to embrace the role that I can have in informing this debate that we’re having about potentially the most significant challenge that human civilization has faced.” Mother Jones, 11-15-13.