Seattle Mayor Mike McGinn Monday submitted a proposed 2014 general fund budget to the City Council that, for the first time in four years, doesn’t make major cuts. The improving economy translates into increased city revenues that the mayor said will allow him to add 176 employees next year after laying off almost 550 between 2010 and 2012. The increasing revenue also allows the mayor to fund many popular programs in an election year. Over the past two weeks, he has held an almost daily news conference to announce a new beneficiary of the city’s current largesse, including senior citizens, perschoolers, and domestic-violence victims. The $1 billion general fund budget includes money for 15 new police officers, an additional $2 million for road maintenance, $7 million for safety improvements around schools and $4 million to improve traffic flow downtown. It also shores up the city’s human services safety net, adding almost $1 million for homeless services, $450,000 for domestic violence services and half a million for early learning and child care. Seattle Times, 9-23-13. 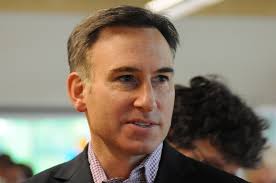 King County Executive Dow Constantine doesn’t have the money for big, exciting initiatives in the 2014 budget he presented Monday. But it is largely a budget devoid of bad news, with no significant layoffs for the first time in six years. It also restores some cuts the county made during the worst years of the economic downturn. But while across the street Seattle Mayor Mike McGinn proposed a series of feel-good initiatives in his budget, Constantine’s budget is subdued. Constantine proposes reopening the Maple Valley Precinct of the King County Sheriff’s Office and restoring lunchtime hours at county courthouses. The proposed 2014 budget is 4 percent bigger than this year’s, returning the general fund to what it was in 2008 after several years of decline. Seattle Times, 9-23-13.

Troops and DOD civilians at JBLM could lose pay in shutdown

Joint Base Lewis-McChord leaders in June announced plans to furlough civilian employees because of forced federal budget cuts. A possible government shut down next week could result in more furloughs for civilian workers and delayed paychecks for troops.

Another budget stalemate in the nation’s capital could result in crimped paychecks for tens of thousands of troops and civilians at Joint Base Lewis-McChord beginning next week unless lawmakers avert a government shutdown. The South Sound’s military-related workforce is back on the edge of a potential loss in pay because Congress has not passed a budget to keep the government running beyond the start of the next fiscal year, which begins Tuesday, Oct. 1. Pentagon spokesman George Little Monday told reporters that the Defense Department would keep its doors open through a shutdown, but that its employees like would experience a temporary loss in pay. Tacoma News Tribune, 9-23-13.

This aerial photograph of the Columbia River Gorge from 2006 shows the view looking west with Bonneville Dam in the foreground.

Health officials in Oregon and Washington said Monday that people should protect themselves against mercury and PCB contamination by limiting consumption of certain fish species from a 150-mile section of the Columbia River. The Oregon Health Authority and the Washington Department of Health said people should eat no more than one meal a week of resident fish — those that live year-round in the same place — between Bonneville and McNary dams. Resident species in the Columbia include bass, bluegill, yellow perch, crappie, walleye, carp, catfish, suckers, and sturgeon. A meal is about the size and thickness of an adult human hand. Officials also recommend not eating any resident fish taken between Bonneville Dam and Ruckel Creek, 1 mile upstream. The advisory does not apply to migratory fish, such as salmon and steelhead, because they spend most of their time at sea. Vancouver Columbian, 9-23-13.

The first day of classes at Bellingham Technical College, set for Tuesday, will be canceled if faculty union representatives and school administrators are unable to reach agreement on a contract. Negotiations between representatives of BTC and the faculty union, the Bellingham Education Association, continued into Monday evening. BTC planned to notify students by email on the status of classes Tuesday. Faculty members voted Thursday, Sept. 19, to strike if the school fails to offer a “fair contract settlement by the scheduled start of school Tuesday, Sept. 24,” according to the union. The faculty has been negotiating with the school for almost a year, according to union liaison Tony Kuphaldt, an instructor at BTC. “We’re looking at three major issues: compensation, language defining work load, and protection in our contract against surveillance as employees,” Kuphaldt said. Bellingham Herald, 9-23-13.

The No on 522 campaign is taking a similar strategic tack that helped win last year in California when Golden State voters narrowly rejected a GMO labeling initiative. The campaign has dusted off and updated a similar opposition report, which argues that a family of four in Washington should expect to pay an extra $490 a year if front-of-the-package GMO labels are placed on 70 percent of the products on supermarket shelves. The report that the Washington Resource Council is pushing was prepared by Northbridge Environmental Management Consultants in Massachusetts. Opponents hope that by hitting hard on the higher-cost message, it will help neutralize Yes on 522 ads that began running a week ago, one of which shows a woman holding up a package of Corn Flakes and saying, “If it is genetically engineered it has to say so. It is that simple and it won’t cost you a dime.” Seattle Weekly, 9-23-13.

The Snohomish County Jail needs immediate reforms to become safer, cleaner, and more humane, a team of national experts has concluded. The National Institute of Corrections, a branch of the federal Department of Justice, Monday released a review of the county-run jail’s operations. It is urging Snohomish County Sheriff Ty Trenary to make several changes. Some of the team’s strongest criticism centered on how the jail fails to address the needs of inmates living with mental illnesses. The team recommended that inmates who may have mental health issues should be evaluated as quickly as possible by a mental health provider so treatment recommendations can be made early on. That could reduce the chances of having to resort to using force on sick inmates. Everett Herald, 9-23-13.

The U.S. Department of Justice this week awarded more than $10 million to eight Indian Tribes in Western Washington to enhance services to crime victims and improve criminal justice in the tribal communities, U.S. Attorney Jenny Durkan said.  The grant awards under various Justice Department programs are tailored to the needs identified by each tribe. “We look forward to continuing our partnership with the Tribes, and are confident these grants will help increase the public safety of each community,” Durkan said.  “One size does not fit all, and I am pleased these grants will address specific needs on Tribal lands.” The grants include nearly $2.6 million for crime issues related to alcohol and substance abuse. Enumclaw Courier-Herald, 9-22-13.

This is a steak

The staff at Washington’s Public Disclosure Commission has recommended changes to how lobbyists report their meals out with lawmakers. The move follows KPLU’s investigation last spring with Associated Press into lobbyist-paid entertainment. Nearly 20 years ago, there was a legislator who wanted to make sure his constituents knew that when he went out with a lobbyist, he ate chowder, not a fancy steak. That led to a requirement that lobbyists accurately report the per-person amount they spend on lawmakers. But the form lobbyists use to report entertainment spending was never updated. Our stories on lobbyist-paid meals revealed that many don’t include a per-person amount and those who do often just divide the total bill by the number of people at the table. Lori Anderson with the Public Disclosure Commission says the updated form will now clearly instruct lobbyists to distinguish the chowder from the steak. KPLU, 9-23-13.

Senate Minority Leader Mitch McConnell (R-KY) broke with Sen. Ted Cruz (R-TX) Monday, revealing that he won’t filibuster legislation to fund the government in service of conservative goals to defund Obamacare. The Republican leader’s decision is a major blow to the push by Cruz and powerful conservative activist groups, who wanted Republicans to unite and filibuster a continuing resolution until Democrats caved and agreed to gut funding for the Affordable Care Act. The decision clears a path for Democrats to pass a continuing resolution that funds Obamacare. Procedurally, Democrats need 60 votes (they have 54 members) to advance the House-passed continuing resolution. But Senate Majority Leader Harry Reid (D-NV) can strike the language defunding Obamacare with 51 votes, which frees up McConnell and every other Republican to vote against such an amendment. This way he never has to actually vote to fund Obamacare but doesn’t force a shutdown over an unachievable goal. Talking Points Memo, 9-23-13. 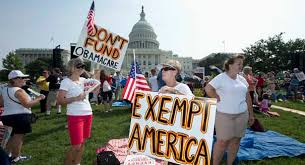 It has become fashionable to give a psychiatric diagnosis to those Republicans teeing up a government shutdown. I’ve lapsed into the off-the-rocker shorthand, too, but this misstates — and understates — the problem. The trouble isn’t that Republicans on the defund-Obamacare mission are insane. It’s that they are being entirely rational. Most of them were acting in their own rational self-interest, doing what’s necessary to survive in a political system gone mad. The tally by political handicapper Stuart Rothenberg says that 211 of the 234 Republican seats in the House are “safe,” leaving only 23 even marginally competitive. Some of those seats are made safe by the incumbents’ skills or bank accounts. But many of them are safe because district lines have been drawn to make them uncompetitive. (See, this is what we get in return for “majority-minority” districts.) Dana Milbank, Washington Post, 9-23-13. Democrat Terry McAuliffe has vaulted into the lead over Attorney General Ken Cuccinelli II in a Virginia governor’s race that has left many voters sour on both candidates, according to a new Washington Post-Abt SRBI poll. McAuliffe leads 47 percent to 39 percent among likely voters, with Libertarian candidate Robert Sarvis’ 10 percent suggesting an unrest among voters not satisfied with either major-party contender. In a one-on-one matchup without Sarvis in the mix, the poll shows a narrower 49-44-percent race between McAuliffe and Cuccinelli among likely voters — but still flips Cuccinelli’s 10-point lead from this spring. The shift in the race has come almost exclusively from female voters, who prefer McAuliffe by a 24-point margin over Cuccinelli. The candidates were effectively tied among women in a Washington Post poll in May. Washington Post, 9-23-13.

An administrative judge ordered Bank of America to pay nearly $2.2 million to 1,147 African-American job applicants in a racial discrimination case that began nearly 20 years ago. Judge Linda Chapman ordered the bank to pay $964,033 to 1,034 applicants who were rejected for jobs at the bank’s Charlotte, N.C., offices in 1993, and another $1.2 million to 113 people who were denied jobs between 2002 and 2005. The judge had earlier ruled the bank applied unfair and inconsistent criteria in its hiring decisions, which led to the rejection of qualified African-American applicants for teller and entry-level clerical and administrative positions. Puget Sound Business Journal, 9-23-13.

Why it’s important for communities to confront Nazis

More than 300 protesters expressed their disapproval of the National Socialist Movement demonstrate during a gathering Sunday in Leith, N.D.

It turns out that North Dakotans are more than happy to let neo-Nazis know they are not welcome to come in and take over their small towns.

Hundreds of protesters gathered in a North Dakota town on Sunday to speak out against plans by an American Nazi group to buy up property and take over the local government in an effort to build a bastion against diversity.

About 300 protesters, including some 200 Native Americans from nearby reservations, gathered outside the Leith City Hall where Jeff Schoep, leader of the National Socialist Movement presented his plans for turning the tiny North Dakota town  – population 24 – into a segregated place where whites can live among themselves.

Haters and racists thrive in darkness, and they thrive on silence. They look for approval from whatever source they can muster. For them, silence equals tacit approval.
But paying attention to haters and, moreover, standing up to them requires both constant vigilance and a keen awareness of the dangers inherent in doing so. In my experience, the best response it to make a complete mockery of them. David Neiwert, Orcinus, 9-23-13.