Walker preaches to choir while protesters mass outside 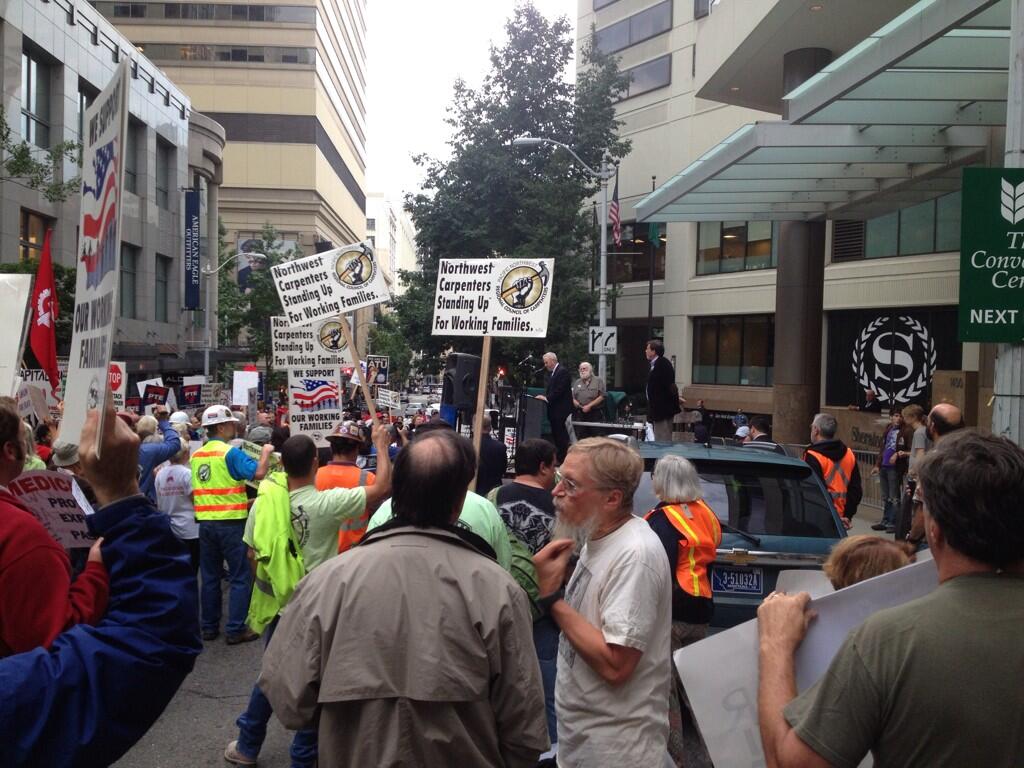 Wisconsin Gov. Scott Walker brought his fiery brand of Republican politics to Seattle on Thursday night, describing at a think-tank fundraiser how he believes conservatives can “reclaim our country.” With some 300 demonstrators outside the downtown Sheraton Seattle Hotel protesting his appearance, the controversial and high-profile governor joked to the dinner’s 2,000 attendees that he felt “quite at home.” Pat Miller of the Pacific Northwest Regional Council of Carpenters said he had a simpler message for the governor: “Go away.” The point of the protest, said organizer David Freiboth, was to affirm to the community that Seattle is a progressive city. “We’re here to say, ‘Have your fun,’ ” said Freiboth, executive secretary of the King County Labor Council. “We (progressives) are still going to run the agenda here.” Seattle Times, 9-5-13.

Backers of the Sea-Tac “Good Jobs Initiative”—which would raise the minimum wage to $15 an hour for most workers at SeaTac Airport, and provide additional benefits like paid sick leave—are seeking justice in the federal courts, thanks to a Kafkaesque journey through King County Superior Court that threatens to block the measure from the November ballot. King County Superior Court Judge Andrea Darvas rejected an additional 61 signatures of registered voters who had signed the petitions more than once, leaving the petitions 18 signatures short of qualifying for the ballot. King County Elections had already rejected the duplicate signatures; now, contrary to established elections procedures throughout the state, Judge Darvas has rejected these voters’ original signatures as well. The Stranger, 9-5-13.

Washington’s newest state lawmaker is likely to be Mercer Island City Councilmember Tana Senn, who passed the next step in the appointment procedure yesterday, and likely will be appointed to the state House next week. A King County Council committee unanimously voted this week to send Senn’s nomination to the full council on Monday, spokesman Al Sanders said. She had been the top choice of local Democratic Party officials to fill a vacancy created by former state Rep. Marcie Maxwell’s decision to join Gov. Jay Inslee’s education team. Seattle Times, 9-5-13.

AFL-CIO: No solidarity charters for ILWU; KCLC: Not so fast ILWU longshore and marine workers have used their port power to support the struggles of other unions. But jurisdictional disputes, most notably a 2011 battle with the Operating Engineers over work at a grain terminal in Longview, Washington, have driven a wedge between the militant union and the AFL-CIO.

As the AFL-CIO prepares for a convention where leaders say the goal is unprecedented solidarity with organizations outside the labor movement, the federation is turning its back on some inside the house of labor. Leaders have ruled that locals of the West Coast Longshore and Warehouse Union (ILWU) cannot seek “solidarity charters” and will be ousted from local and state labor councils. The ILWU international disaffiliated from the AFL-CIO last Friday. In discussion this week among executive board members of the King County Labor Council in Seattle, there was widespread support for offering solidarity charters to ILWU locals, even from some leaders whose locals have had jurisdiction disputes with the ILWU. Members argued for maintaining labor unity. David Freiboth, executive secretary of Seattle’s labor council and a former national president of the ILWU’s marine division, the Inlandboatmen’s Union of the Pacific, stressed that “Seattle has a long history of solidarity.” Labornotes, 9-5-13.

So the United Grain lockout was bogus? No criminal charges for ILWU member accused of sabotage at Vancouver terminal

An International Longshore and Warehouse Union local 4 supporter holds a sign outside the main gate to United Grain as a vehicle enters May 1 in Vancouver. The Clark County Prosecuting Attorney’s Office won’t file charges against a longshore worker accused of sabotaging operations at United Grain Corp. during a labor dispute in December.

The Clark County Prosecuting Attorney’s Office won’t file charges against a longshore worker accused of sabotaging operations at United Grain Corp. during a labor dispute in December. The company locked out 44 union workers Feb. 27 based on its private investigator’s conclusion that union worker Todd Walker had purposely damaged the company’s machinery. Senior Deputy Prosecutor Jeff McCarty said in a letter to Vancouver police Det. Carole Boswell that he agreed with her conclusion that it’s impossible to identify the person captured on the video or to be certain “that the person in the video is actually damaging the machine.” “The video is from a considerable distance, appears grainy, and is of poor quality,” McCarty wrote. “From my review of the video, it is only possible to prove that a person in an orange coat and tan pants approaches and is around the damaged machine.” Vancouver Columbian, 9-5-13.

A new $44 million interchange on Highway 526 in Everett could ease traffic headaches for Boeing and aerospace suppliers. An off-ramp could be built from I-5 over the railroad tracks in Marysville to the new Ebey Slough Bridge, reducing congestion on busy arterials at rail crossings. The aging bridge over the Snohomish River on Highway 9 could be replaced. These are a few of the hundreds of millions of dollars in Snohomish County road improvements that weren’t funded by the Legislature earlier this year. If lawmakers don’t meet this fall, they’ll be left on the table again. Everett Herald, 9-5-13.

The $80 million press box and luxury suites addition at Washington State changed the look of Martin Stadium, the most modest stadium in the Pac-12.

A legislator who accepts an invitation to a Husky or Cougar football game to sit in the university president’s box with all the complimentary food and drinks isn’t breaking any ethics rules. A legislator who takes a couple of free tickets to take a friend or family member to a game and sit in the stands with the rest of the fans is breaking those rules, even if they buy their own hot dogs, soda, and kettle corn. With college football season just starting up, the attorney for the Legislative Ethics Committee reiterated these long-standing rules Thursday at the panel’s monthly meeting after staff received several inquiries from new legislators about what’s OK and not OK. Spokesman-Review, 9-5-13.

The main takeaway from an exhaustive new study of premiums on the Obamacare health insurance marketplaces: They’re generally going to be lower than expected, undercutting the persistent claims of “rate shock” by conservatives. Marketplaces premiums are coming in below initial estimates, said the nonprofit, nonpartisan Kaiser Family Foundation in a new report released Thursday. If Kaiser’s estimates bear out, it could be a big blow to one of the main conservative talking points against the Affordable Care Act: rate shock. Everybody from House Republicans to think tank types like the Manhattan Institute’s Avik Roy and the Heritage Foundation have been warning that consumers would see skyrocketing prices under the law. Talking Points Memo, 9-5-13.

Tiana Parker, 7, is attending a new school in Tulsa this week—and the rest of us would be wise to understand why. Tiana’s father pulled her out of Deborah Brown Community Charter School earlier this week when school officials barred his dreadlocked daughter from entry because of a policy that forbids “faddish hair styles.” Can a public school do that? And does it matter that they’re a public charter school? Historically, when it comes to issues of student expression in public schools, courts have employed a variety of tests to determine whether restrictions on student dress violate First Amendment rights. In other words, public charter schools are not, under the law at least, full-blown public schools. That means that even if she had wanted to try, Tiana Parker would have had no First Amendment standing. And it means that the two million students in the country currently enrolled in public charter schools – approximately 4% of the total student population, and growing – may have no free expression rights whatsoever. Education Week, 9-5-13.