Seattle teachers approved a new two-year contract late Tuesday, ending contentious  negotiations that raised the possibility of a strike, one that would have been the first in this city in decades. The new contract was approved by voice vote at Benaroya Hall with about 1,500 of the district’s 3,000 teachers in attendance. The vote paved the way for school to open on time Wednesday, even as many young students probably went to bed Tuesday night without knowing for sure whether they would be going to class in the morning. The majority of teachers decided the district’s offer was good enough, with a two percent raise for the 2013-14 school year 2.5 percent the year after, and compromises on a number of issues, including the use of test scores in judging how well teachers do their jobs. Seattle Times, 9-3-13.

Both Seattle Mayor Mike McGinn and State Senator Ed Murray say they will work to raise the minimum wage in Seattle if elected mayor. At the annual Martin Luther King County Labor Day picnic, the two candidates mingled with union workers. “I think we have to look at who we want to raise it on. A lot of small businesses couldn’t afford to have a high minimum wage.” said Murray. “The last thing we want is a business, labor, war in this city. I think we can avoid that. I think we can do this constructively and over time.” McGinn said he’ll work with business and labor on the issue. “I support increasing the minimum wage, but I think we have to make a good faith effort at the state and federal level before we look at the city.  We’ll take a serious look at the local level if we can’t get traction at other levels,” said McGinn. KING, 9-2-13. 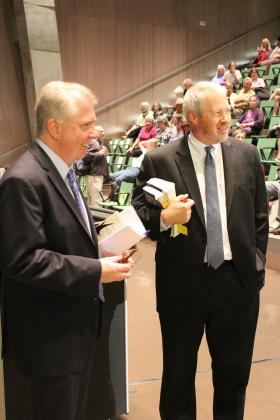 An old time-y “Defend Medicare and Social Security” march preceded the annual Labor Day picnic at Woodland Park, with Mayor Mike McGinn and challenger State Sen. Ed Murray speaking at the event, then joining the marchers, and then schmoozing with picnic goers. The contest for Seattle Mayor is a curious combination of common ground and close quarters combat. Both McGinn and Murray harp on the issue of an “affordable” Seattle, in which people who work in the Emerald City can afford to live in the Emerald City, in which housing is built that a middle class family can live in. Of course, in liberal Seattle, nobody talks of putting controls on the proliferation of tax levy measures which have expanded to take in basic city services.  The latest, on the ballot this fall, asks voters to fork up money to pay for Seattle City Council campaigns. Joel Connelly, Seattle P-I, 9-2-13. 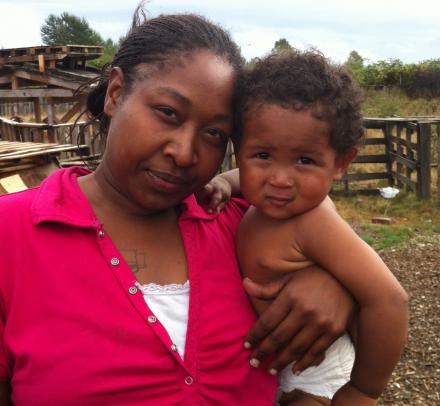 Nickelsville resident Truby McDowell with one of her children.

Over the holiday weekend, Seattle’s homeless camp Nickelsville left West Seattle after more than two years. Moving is traumatic for anyone, but it’s particularly complicated when you don’t have a permanent place to live. That’s how it is for the people in Nickelsville, including Richard Gilbert. He’s moving his entire house. It’s a small shack, really, with just room enough to sleep, but with a proper door and a window. The whole structure is moving to a new location. Gilbert is the so-called historian of Nickelsville, and he has lived with the camp since it started in 2008. He says the loss of community is what upsets people most. KPLU, 9-3-13.

Inslee may call special session to get transporation package

An enthusiastic non-stop campaigner, Gov. Jay Inslee plans to hit the road this fall to pressure the Legislature into enacting a statewide transportation package.

Gov. Jay Inslee is willing to call a special session of the Washington Legislature “as early as November” to pass a statewide transportation package, and plans to hit the road to put heat on lawmakers to send a bill to his desk. Inslee and King County Executive Dow Constantine appeared Monday morning in front of charts showing 35 bridges and 70 road segments badly in need of repair, and Metro bus routes facing extinction. They were getting a jump on a statewide series of fall meetings to be hosted by the state Department of Transportation and legislators on how to get Washington moving. He blamed a Republican-dominated Senate coalition for its “abject failure to act” during the Legislature’s regular session and two special sessions. Seattle P-I, 9-3-13.

Hundreds of protesters cross the Columbia River in Vancouver on July 27 in support of an amphibious demonstration at the Interstate 5 Bridge against proposed fossil fuel facilities in the Northwest.

Energy producers, transporters, and brokers have put Southwest Washington and the Pacific Northwest in the spotlight with proposals to transform ports into key shipping hubs in a worldwide realignment of valuable oil and coal resources. Under 14 different plans and operations, Washington and Oregon ports essentially would serve as a vast transfer station for the coal and oil being extracted from America’s heartland, where raw materials are sent to domestic and overseas markets demanding fuel and electricity for growth. But if CEO Ken Miller and the owners of Millennium—Ambre Energy and Arch Coal Inc.—expected a warm welcome in job-thirsty Southwest Washington, they need to take a closer look. Regional and even national environmental activists, who see new oil and coal terminals as harbingers of increased carbon pollution that will hamper efforts to shift to clean sources of energy, have turned an eye to the Northwest and Vancouver. Vancouver Columbian, 9-1-13.

Feds may be struggling on coal port study

The U.S. Army Corps of Engineers is trying to figure out a way to make its narrow environmental study for a proposed coal port in Washington fit together with the state’s study of the global effects of mining and burning that coal. The Corps had scheduled a press conference Tuesday morning to explain its plans for the Environmental Impact Statement on a proposed coal port at Cherry Point, near Bellingham. At the last minute, however, Muffy Walker, chief of the Corps’ regional branch in Seattle, said they weren’t quite ready to say anything because of need for “some coordination above the regional level.” The higher-ups hadn’t quite decided whatever it is they want to say. Spokesman-Review, 9-3-13. 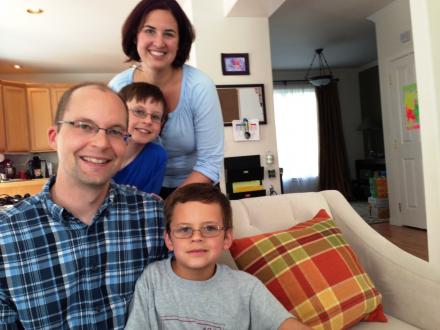 There are nearly 900 registered lobbyists in Washington state. These are the paid professionals who try to influence the outcome of the legislative process. But this year, a determined dad proved even outsiders can play the legislative game with a bit of help. So how does a Microsoft test manager become a citizen lobbyist? For Jeff Schwartz, it all started back in 2007 when his son, Jacob, was about 4 months old. KPLU, 9-3-13.

Labor union frustration boils over with president on Obamacare

Unions are frustrated that the Obama administration hasn’t responded to their calls for changes to Obamacare. Labor has watched with growing annoyance as the White House has backed Obamacare changes in response to concerns from business groups, religious organizations, and even lawmakers and their staffs. They say they don’t understand why their concerns so far have fallen of deaf ears. It’s an issue that Obama may have to face when he speaks to the AFL-CIO convention a week after Labor Day. Most unions backed ObamaCare’s passage, but labor argues provisions in the law could cut employee hours, unfairly tax their plans and force workers off their union health plans into the law’s potentially more costly insurance exchanges. The Hill, 9-2-13.

Rubio demands cancellation of Obamacare advertising (as if!)

In a letter sent Tuesday, Sen. Marco Rubio (R-FL) demanded that the U.S. Department of Health and Human Services cancel a planned $8.7 million television ad buy to promote Obamacare. Rubio is one of several congressional conservatives who have argued that the Obama administration can’t and shouldn’t use federal funding to promote participation in the programs created by the health care reform law. Talking Points Memo, 9-4-13.

The NC State Board of Elections Tuesday overturned a local ruling from Pasquotank County that would allow Montravias King to run in his upcoming local election. At issue was a dispute whether or not he has established permanent residency as a student at Elizabeth City State University.

Under the glare of a national media spotlight, the North Carolina Board of Elections ruled on two cases Tuesday that offered a glimpse of where the five members appointed by Gov. Pat McCrory (R) stand on the changed electoral landscape. The board members unanimously agreed that an Elizabeth City State University student can run for local office, reversing a decision by the Republican-controlled Pasquotank County elections board. But in a 4-1 vote, the state board brushed aside an attempt to overturn a Watauga County elections board decision to close an early-voting site on the Appalachian State University campus for the coming municipal election. Raleigh News and Observer, 9-3-13.

The myth of welfare and drug use

Last year, Utah Republicans passed and enacted a law that mandated drug testing for welfare recipients. Now, if you’re the kind of person who forwards apocryphal stories about voter impersonation and drug-addled welfare queens, this makes sense to you—obviously, if you’re on public assistance, you’re probably using drugs. But, if you the kind of person who takes facts seriously, this is a ridiculous idea. The myth of welfare recipients spending their benefits on drugs is just that—a myth. And indeed, in Utah, only 12 people out of 466—or 2.5 percent—showed evidence of drug use after a mandatory screening. The total cost to the state was $25,000, or far more than the cost of providing benefits to a dozen people. The only thing “gained” from mandatory drug testing is the humiliation of desperate people. Daily Beast, 8-30-13.