Assistant Police Chief Mike Sanford trips on his way to confront black clad protesters on May Day 2012 in Seattle, several minutes after individuals used flag poles and rocks to break windows in the downtown area.

An independent review of the violence that rocked Seattle’s business core during last year’s May Day protests is critical of the police department’s planning for the event and said officers on the street were confused over who was in charge and when they could use force to stop the violence. The report, released Tuesday and authored by Michael Hillmann, former deputy chief of the Los Angeles Police Department, said officers were universally critical of the actions of Assistant Chief Mike Sanford, who rushed into the crowd in shirtsleeves to make an arrest and then had to be rescued. Hillmann said everyone interviewed said Sanford’s actions resulted in his rescuers having to use force against the protesters to extricate him. Seattle Times, 4-2-13. 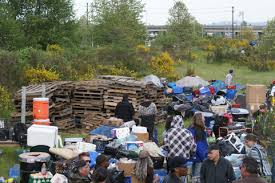 After almost two unsanctioned but unchallenged years at the West Marginal Way/Highland Park Way site where it was founded, the encampment that calls itself “Nickelsville” is coming under increasing scrutiny, particularly after its open admission of turmoil last month. After again discussing the encampment at its last meeting, followed by a letter to the city, the Highland Park Action Committee community council has just sent a formal letter to Mayor McGinn and the Seattle City Council with a deadline of June 13. The letter decries inaction by the city and promises “Should we not hear a move out date from the City by the encampment’s 2nd Anniversary (May 13th), we will be forced to take action which will include more media, a lot of e-mails and visits to your offices from our community, and legal action.” West Seattle Blog, 4-2-13.

The Seattle City Council Monday approved a six-year contract to have Seattle’s food and yard waste hauled by truck to Kittitas County. PacifiClean Environmental plans to find a site and build a new compost plant by next April, but its new agreement includes some requirements to lessen the impact on Kittitas County residents. The new plant must be somewhere free of timber, outside the extreme fire-hazard zone and the Mountains to Sound Greenway, and away from rivers and homes. “With this legislation, the council is making a really clear statement that we don’t want the waste that comes from Seattle to cause problems in other communities,” said Council member Tom Rasmussen, one of two members who pushed for extra time to toughen the contract. Seattle Times, 4-1-13.

City of Enumclaw offers no comment as county moves to preserve 43,000 acres, but mayor offers letter of support

The White River flows through the forest that bears its name, east of Enumclaw.

Enumclaw will formally sit silent as King County moves ahead with plans to prohibit commercial development on 43,000 acres of timbered land east of town. The issue came to light March 21 when King County Executive Dow Constantine announced he had reached an agreement with Hancock Timber Resource Group. The plan calls for the county to pay Hancock $11.1 million to purchase “development rights” on the White River Forest, a swath of land running along state Route 410 and abutting the White River. Constantine and supporters of the county plan say the goal is to protect the forestland from future development. Critics would argue the move has the potential to limit economic enterprise. Enumclaw Courier-Herald, 4-2-13.

Steve Sarkozy, Bellevue city manager since 2000, has resigned effective May 15. The City Council approved a severance agreement at the end of Monday night’s meeting, after an executive session. Sarkozy, who oversaw a massive building boom in downtown Bellevue and helped set the stage for redevelopment of the Bel-Red Corridor, was paid $237,540 a year and will receive a one-year severance package, Mayor Conrad Lee said. Seattle Times, 4-2-13.

Environmental groups to sue BNSF over coal in waterways

Several conservation groups Tuesday announced plans to sue Burlington Northern Santa Fe Railway and several top U.S. coal producers, claiming they spill coal into Washington state waterways in violation of federal law. The Sierra Club and other groups allege the companies discharge coal, coal chunks, coal dust, and other pollutants into state waters when Rocky Mountain coal carried in open-rail cars across the state gets blown, shaken, or falls off. Many of those rail lines run along rivers, lakes and streams, and the coal and other material end up in those waters, potentially harming aquatic life, ecosystems and people, according to the groups, which include Puget Soundkeeper Alliance, Columbia Riverkeepr, Friends of Columbia Gorge, and RE Sources for Sustainable Communities. Associated Press (Yakima Herald-Republic), 4-2-13.

State and federal agencies have joined project opponents in calling for a wide-ranging review of potential impacts from the Gateway Pacific Terminal project that SSA Marine hopes to build at Whatcom County’s Cherry Point. SSA Marine and its allies have made it clear they would prefer an environmental impact statement that focuses on the immediate environs of the coal pier site itself, on industrial waterfront south of the BP Cherry Point Refinery. Environmental groups fighting the coal terminal, and people concerned about health and traffic impacts from coal trains, have demanded a broader review. They want an analysis that includes air pollution and climate change impact from coal burning, as well as assessment of rail traffic impacts from Wyoming and Montana mines to Cherry Point. The state and federal agencies weighing in during the 120-day comment period tend to agree with project opponents on how broad the study should be, although they do not join environmentalists in outright opposition. Bellingham Herald, 4-1-13.

The Washington State Department of Ecology has known since the 1990s that its water-pollution limits have meant some Washingtonians regularly consume dangerous amounts of toxic chemicals in fish from local waterways. At least twice, Ecology has been told by its overseers at the U.S. Environmental Protection Agency to fix the problem and better protect people’s health. Ecology was close to finally doing that last year — until Boeing and other business interests launched an intense lobbying campaign aimed not just at Ecology but also at the Washington Legislature and then-Gov. Christine Gregoire. That is the picture that emerges from recent interviews as well as government documents obtained by InvestigateWest under the Washington Public Records Law. InvestigateWest, 3-30-13.

Senate Republicans came up with an education reform bill to hold back third-graders who cannot read well. As of today, SB 5237 is still alive in the Washington House. But the bill’s Senate creators wouldn’t recognize it. Democrats on the House Education Committee drastically overhauled that bill Tuesday. They inserted several planks to upgrade the teaching of reading in grades K-3.  But they took out the part in which third graders could be held back if they cannot read at a certain level, which was the main plank of the Senate bill introduced by Sen. Bruce Dammeier (R-25). Crosscut, 4-3-13.

A bill amendment proposed Tuesday could allow employers to ask for a worker’s Facebook or other social media password during company investigations. The provision was proposed for SB 5211, which safeguards social network passwords of workers and job applicants. The measure bars employers from asking for social media credentials during job interviews. The amendment was introduced at the House Labor Committee at the request of business groups. The amendment “would turn this bill into a privacy bill into an employer fishing expedition,” said Shankar Narayan of the Washington chapter of the American Civil Liberties Union. “That’s the not the bill we signed up for.” Associated Press (Seattle P-I), 4-2-13.

Even suspected of theft? No job for you again, ever 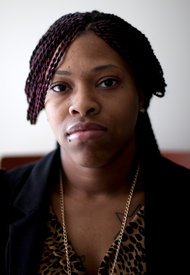 Keesha Goode was turned down by Dollar General, partly based on a database of retail thefts.

Facing a wave of employee theft, retailers across the country have helped amass vast databases of workers accused of stealing and are using that information to keep employees from working again in the industry. The repositories of information, like First Advantage Corporation’s Esteem database, often contain scant details about suspected thefts and routinely do not involve criminal charges. Still, the information can be enough to scuttle a job candidate’s chances.  But the databases, which are legal, are facing scrutiny from labor lawyers and federal regulators, who worry they are so sweeping that innocent employees can be harmed. The lawyers say workers are often coerced into confessing, sometimes when they have done nothing wrong, without understanding that they will be branded as thieves. New York Times, 4-3-13.

Carolina nullifiers at it again, this time with public prayer legislation

Lawmakers are asking the North Carolina General Assembly to proclaim the Rowan County Defense of Religion Act of 2013, a resolution that would back county commissioners’ use of sectarian prayer in official meetings. But the intent of the resolution and its possible ramifications have led to heated remarks on both sides as lawmakers and legal experts grapple with First Amendment interpretations. N.C. Reps. Harry Warren and Carl Ford, both Republicans from Rowan, filed the joint resolution Monday. Commissioners have vowed to keep praying after the American Civil Liberties Union filed a lawsuit against county leaders on behalf of three Rowan residents last month. Salisbury Post, 4-2-13.

In New York City, Mayor Michael Bloomberg and New York City police commissioner Raymond Kelly wage a scorched-earth campaign to prevent the public from being able to monitor its own police force. And in that crusade comes the frightening assumption about how the terms “safety” and “security” are now defined. To appreciate the rank hypocrisy of Bloomberg and Kelly opposing the creation of an independent police monitor, remember that they are two of the faces of the modern American Police State — and two of the biggest proponents of 24/7 monitoring of citizens. David Sirota, Salon, 4-2-13.

Ben Bernanke himself famously argued years ago that a central bank should never run out of tools for fighting deflation and depression because, as a last resort, it could always drop cash out of helicopters. That would be fun to watch, obviously, but mailing checks would be a lot simpler. The best thing about helicopter money is that it’s largely agnostic as to what lies at the root of our problems. As long as you think there’s some level of excess capacity in the economy, putting cash in the hands of households will help. Most obviously, if people had more money they’d buy more stuff. That means more jobs making, transporting, and selling the stuff. But not everyone would spend all of their helicopter money. Lots of families would use it to help pay off debts already accumulated, which would help speed the process by which we climb out of the debt hole of the boom years. Matt Yglesias, Slate, 4-1-13 (I don’t think this is an April Fool’s Day effort).