Artist’s rendering of the proposed development at 4755 Fauntleroy Way SW.

In a July 15 letter (pdf) to Seattle Department of Transportation director Peter Hahn, Mayor Mike McGinn has instructed SDOT to reject a request to vacate a city alley and transfer ownership to developers of a controversial Whole Foods megaproject proposed for 4755 Fauntleroy Way Southwest in West Seattle. Project opponents, including United Food and Commercial Workers Local 21, have been clear in demanding that the city negotiate a “Community Benefits Agreement” that could presumably include wage and benefit concessions. Whole Foods is notoriously anti-union while the national supermarket chains it competes with here—Safeway, Albertson’s, Thriftway, and QFC/Kroger—are all union shops. So it is reasonable to question whether it is ever in the public interest to advantage low-wage/nonunion Whole Foods against competitors that provide living wage union jobs. The Stranger, 7-16-13. The project just passed Design Review last week, and has also been approved by the Design Commission, which reviews projects that require alley or street vacations, as does this 370-apartment, 600-parking space proposal. But other reviews are ahead because of the alley-vacation request. West Seattle Blog, 7-16-13.

Alaska Airlines and the Washington Restaurant Association have filed a lawsuit seeking to block the SeaTac City Council from sending the airport workers minimum-wage Initiative to voters later this fall. The lawsuit asks King County Superior Court to prohibit “the City of SeaTac and the City Clerk from taking any further steps to place the proposed Ordinance before the City Council for action or any other steps to forward the proposed Ordinance to King County for placement on a ballot for any election.” Alaska’s lawsuits specifically ask the court to order the City of SeaTac to pay for the “Plaintiffs’ costs and attorneys’ fees” for filing the lawsuit. Highline Times, 7-15-13. SeaTac voters and airport worker supporters reacted sharply to the news. Voters and community leaders question the corporations’ motivation in blocking a popular citizen initiative.  The SeaTac City Council is scheduled to vote July 23 to place the Good Jobs Initiative on the November ballot. The Stand, 7-16-13.

A TSA screener at Sea-Tac Airport

In its first job action, the union local representing many of the Transportation Security Administration officers at Sea-Tac airport is handing out leaflets to passengers crossing between the airport terminal and the parking garage. In those leaflets, they ask this question: “Increased risk?”   Details on the other side outline an agency and its employees working shorthanded and working tired—down 35 or more people, say union leaders, and employees working shifts of up to 10 hours with long stretches without breaks or lunch. Local 1121 of the American Federation of Government Employees says it is compelled to speak out. The union’s leaflet goes on to assert that some female officers have lost their jobs because of pregnancy and the elimination of light duty roles that don’t require lifting.  Shift schedules change on short notice, and they haven’t seen a pay increase in three years. KING, 7-15-13.

Female employees at the City of Seattle are paid less than their male colleagues, according to a report being released by the city analyzing its wage structure. The report reveals that on average, the City of Seattle pays its female employees 9.5 percent less than male employees. Women are also earning less for the same type of work: “Some job groupings show a marked difference in wages between genders,” the report concedes. “Men in the Officials and Administrator category earn significantly more than females in the Fire, Police, Personnel, and Intergovernmental Relations departments.” However, the report concludes that this wage gap cannot be solely attributed to equal work for unequal pay. Other factors, including age and the city’s apparent propensity to hire more men than women in general, and to hire men over women for higher paying positions, also plays a role. The report notes that these factors need “further analysis.” The Stranger, 7-16-13.

Tesoro, Port of Vancouver colluded behind closed doors to quell opposition to fracking-oil facility before fatal Quebec blast; talks took place before project even was announced

The Port of Vancouver has invested heavily in rail facilities, which was a major factor in attracting a plan by Tesoro Corp. and Savage Companies to build an oil transfer terminal. Courtesy Port of Vancouver.

The proposal to build the largest oil terminal in the Pacific Northwest in Vancouver stretches back to January, when Tesoro Corp. and Savage Companies presented the Port of Vancouver with a highly lucrative deal and a plan to win political support and deflect critics. Public records show that the companies spelled out their approach to the project, designed to handle as much as 380,000 barrels of crude per day, in a Jan. 23 “statement of interest” document: “We will develop (with involvement from Port management) a comprehensive community outreach and government relations plan that would be implemented prior to, and in anticipation of, environmental and land use permitting and the (State Environmental Policy Act)process,” the companies wrote in the 42-page letter to Mike Schiller, the port’s general manager of operations. “Implementation of this plan will occur prior to any public notice or the filing of permit applications in order to encourage early collaborative stakeholder communication, garner support for the Project, and reduce the risk of potential opposition,” it read. The collaborative strategy between the publicly owned port and the two corporations reveals the high stakes for both sides in seizing opportunities created by mid-America’s oil boom. Vancouver Columbian, 7-16-13.

Murray is “extremely concerned” that Bonneville Power Administration has disadvantaged veterans in hiring, and taken “punitive actions” against employees who cooperated with Inspector General.

The Department of Energy agency that markets power in the Pacific Northwest has “disadvantaged” veterans in its hiring and retaliated against employees who cooperated with an investigation into violations of federal hiring guidelines, according to a scathing interim report by the DOE’s Office of Inspector General. The Portland-based Bonneville Power Administration is a powerful, manipulative, and notoriously self-protective bureaucracy, best known for resistance to salmon enhancement measures that cut into revenues from federal dams on the Columbia-Snake River system. The Inspector General has pulled no punches after investigating an anonymous complaint that the BPA violated both Office of Personnel and DOE regulations regarding veterans preference in hiring. Sen. Patty Murray (D-WA), the region’s senior U.S. senator, reacted with alarm to the Inspector General’s findings. She is a senior member and former chair of the Senate Veterans Affairs Committee. “I’m extremely concerned by today’s report of discriminatory practices toward veterans and other groups at BPA,” Murray said.  “I’m also disturbed by reports that BPA leadership took punitive actions against employees who cooperated with the IG investigation, and I support the Department of Energy’s decision to suspend pending removals and disciplinary actions.” Seattle P-I, 7-16-13.

Whether you are for or against stricter background checks on gun sales, you’ll have a chance in the coming months to support your position by signing an initiative to next year’s Legislature. If both Initiative 591 and Initiative 594 get the required signatures, they’ll likely be on the 2014 ballot if the Legislature follows its recent pattern of punting such measures to the voters rather than adopting them. I-591 is a one-page proposal that bans government confiscation of guns and any background check that isn’t part of a national system. I-594 is an 18-page proposal that lays out a process to apply the current federal system of background checks required by dealers to private sales in Washington – with some exceptions for family transfer and antique sales. Spokesman-Review, 7-16-13.

Thanks, Tim. State’s advisory tax vote guides could cost the taxpayers you say you love $240K

Eyman: No shame whatever

Washington’s fall voters’ guide may be 20 pages longer and cost nearly a quarter-million dollars more to publish. That’s because of a voter-approved requirement that all tax hikes appear on the ballot for an advisory vote. This year there will be five of these non-binding ballot measures. The secretary of state’s office is looking for ways to reduce the number of pages required. Anti-tax activist Tim Eyman sponsored the ballot measures that require the advisory votes. He says the printing costs are a small price to pay compared to the cost of the tax increases over 10 years. KPLU, 7-16-13.

For almost two years, Senate Republicans have insisted they would block anyone from being confirmed as head of the new Consumer Financial Protection Bureau without major changes in how the agency conducts its business. On Tuesday, Republicans relented and agreed to allow Richard Cordray to be confirmed as the bureau’s leader. The vote was 66-34. And in the end, what do Republicans have to show for their two-year fight? Pretty close to nothing — which raises questions about why it took so long to strike a deal and highlighting how poisonous the debates over presidential nominations had become in the Senate leading up to this week. “This shows the danger of overplaying your hand,” said Jaret Seiberg, an analyst with Guggenheim Partners who has followed the debate closely. “By not dealing when they had a hand to play, the Republicans get nothing out of this.” Politico, 7-16-13.

Obamacare kicks in: Individual premiums to drop 50% in NY

Individuals buying health insurance on their own will see their premiums tumble next year in New York State as changes under the federal health care law take effect, state officials were to announce Wednesday. State insurance regulators say they have approved rates for 2014 that are at least 50 percent lower on average than those currently available in New York. Beginning in October, individuals in New York City who now pay $1,000 a month or more for coverage will be able to shop for health insurance for as little as $308 monthly. With federal subsidies, the cost will be even lower. Supporters of the Affordable Care Act credited the drop in rates to the online purchasing exchanges the law created, which they say are spurring competition among insurers that are anticipating an influx of new customers. The law requires that an exchange be started in every state. New York Times, 7-16-13. 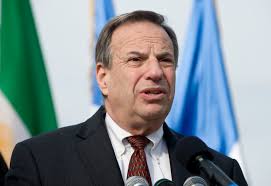 Turning up the pressure on Mayor Bob Filner to resign, three former supporters Monday released details of his alleged sexual harassment of women, including the forcible kissing of two constituents and grabbing the buttocks and breast of a staff member. In a City Hall elevator, Filner told a female staffer that women employees would do better “if they worked without their panties on,” attorney Marco Gonzalez said at a news conference outside City Hall. Filner’s behavior toward women is so egregious that women who work for him call him a “dirty old man” and coined the phrases “the Filner headlock” and “the Filner dance” to describe how he isolates women and then makes unwanted advances, Gonzalez said. The accusations came two hours after the 70-year-old Democrat issued a statement saying he would not resign and that a fair investigation would find him innocent of sexual harassment. Los Angeles Times, 7-15-13.

Chasing South Carolina: For Boeing and Washington state, it’s a race to the bottom Washington state has a world-class aerospace cluster, employing more than 130,000 people making products the rest of the world wants to buy. In 2003, Boeing cast a chill on the state, moving its headquarters to Chicago. In 2009, the chill deepened with the decision to assemble some 787s in South Carolina. This trend continues with recent announcements to move engineering work to Southern California, start an engineering center in South Carolina, and transfer computing and pilot training work, too. One interpretation is that Boeing is so averse to unions that it will move to any region committed to suppressing unions – South Carolina being a case in point. Some industry observers and elected officials conclude that Washington state should weaken unions, to “compete.” There’s something creepy about this. Stan Sorscher, for Puget Sound Business Journal, 7-16-13.