After NBA rejection, what’s next for Hansen’s Sodo properties? The shuttered PaperZone at 1911 First Ave. South in Seattle is located on a parcel of property purchased by Chris Hansen last fall.

Now what do I do with all this property that I paid too much for? That’s a question that Chris Hansen may be asking in the aftermath of the National Basketball Association’s Wednesday decision to keep the Sacramento Kings in Sacramento. In one afternoon, Hansen went from would-be NBA team owner and professional sports arena developer to commercial property manager. It could be years before Hansen lands a team. In the meantime, what should he do with all of the Sodo property he now owns? He paid nearly $64.7 million for the real estate. That’s almost $15 million more than the King County assessment of the land. Given how much Hansen paid for the real estate, there is no interim use that would generate the kind of income needed to make the investment pencil out. It’s either the arena or nothing. Puget Sound Business Journal, 5-16-13. 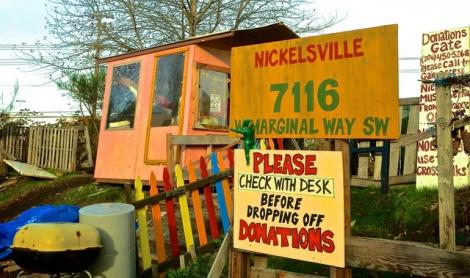 The entrance to Nickelsville

The residents of Nickelsville are awaiting word from the city on what will happen with their encampment, located down the hill from the Highland Park neighborhood of West Seattle. Mayor Mike McGinn has written a letter to City Council proposing two solutions.   First option (and according to McGinn’s staff his preferred resolution) is to facilitate Food Lifeline’s interest in purchasing the parcel of land where Nickelsville resides to build a new facility (Food Lifeline is a nonprofit food distribution agency). The second option is to “retain the West Marginal Way property to provide space for a properly run encampment to remain on a semi-permanent basis. West Seattle Herald, 5-16-13.

Sometime this week, during the official filing period for public office in Washington state, Aub urn mayor Pete Lewis will have signed the papers and dropped his name in the hopper for Port of Seattle Commissioner, Position 1, in a challenge to incumbent John Creighton. “There needs to be some representation from the south-end cities outside of the main metropolitan areas. The Port of Seattle encompasses the entire county, and I’d be one of the very few commissioners ever to be south of I-90,” Lewis said. If he is to be successful, Lewis conceded, he will have to do a bit of catching up raising money. Where Creighton’s campaign war chest is already plump with $73,980, Lewis as of this week had no money in his campaign kitty. Auburn Reporter, 5-16-13. 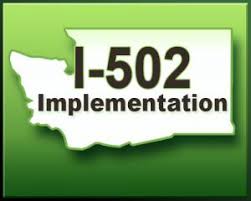 Washington residents and out-of-staters could buy an ounce of marijuana, seven days a week, up to 20 hours a day, in visits to state-regulated stores under draft rules for a new legal pot system released Thursday by the Liquor Control Board. But Washington would not allow the sale of marijuana concentrates, such as hashish or hash oil, unless they were infused in edible or liquid products. The high-potency concentrates have become popular, particularly with younger users. Washington’s 46-page raft of rules cover issues from product testing to growing licenses to advertising restrictions to package labeling. Seattle Times, 5-16-13.

A florist facing lawsuits from the Washington attorney general and the American Civil Liberties Union for refusing to provide flowers for a same-sex wedding has filed her own lawsuit against the state and Attorney General Bob Ferguson for violating her religious beliefs. Attorneys for Alliance Defending Freedom, a legal ministry that advocates for people’s religious rights, filed the suit against the state in Benton County Superior Court on Thursday on behalf of Barronelle Stutzman of Arlene’s Flowers. It argues that Ferguson’s suit is attempting to force Stutzman to act contrary to her religious convictions in violation of her constitutional freedoms. The lawsuits stem from an incident in March when Stutzman refused to provide flowers to a long-time client because she said same-sex marriage was against her personal beliefs. The couple wrote about Stutzman’s decision on Facebook, getting the attorney general’s attention. Tri-City Herald, 5-16-13.

Business as usual for Ferguson in visit to Grays Harbor

Attorney General Bob Ferguson made a stop in Grays Harbor this week, talking with prosecutors and police about legal issues, especially courthouse security, an issue of pressing importance in Grays Harbor County. “Folks, particularly in Grays Harbor, have an interest in that,” he said, referring to the March 9, 2012, attack where Steven D. Kravetz stabbed and shot Dep. Polly Davin and stabbed Superior Court Judge David Edwards. Gov. Jay Inslee was scheduled to sign into law a bill Ferguson pushed this session on courthouse safety. There were already sentencing enhancements in place for attacks on courthouse staff in the course of their duties, but SB 5484 extends those penalties to attacks on anyone in the area of a courthouse. Aberdeen Daily World, 5-15-13.

Out-of-state money pouring into the campaign coffers of this fall’s initiative to require labeling of genetically modified food products make clear that Washington will once again be a battleground state for progressive causes. Supporters of Initiative 522, which would require any product sold in Washington stores to say if it contains genetically altered substances, have raised nearly $2 million for various campaign organizations. Three-fourths of it came from businesses or people outside Washington. “It’s part of a national movement,” Liz Larter, a spokeswoman for the Yes on I-522 campaign, said of efforts to require companies to tell consumers if their products contain modified ingredients. Spokesman-Review, 5-16-13.

George Adams, right, sings with a crowd of dozens as they await a decision on whether the disenrollment process of 306 Nooksack Indian Tribe members will be allowed to proceed Thursday, May 16, 2013, in front of the Nooksack Tribal Court in Deming. The judge is reviewing the case and will issue a decision in coming days.

More than 300 members of the Nooksack Indian Tribe must wait another week to find out if they will face loss of tribal membership and the benefits that go with it. Tribal Chief Judge Raquel Montoya Lewis heard legal arguments for about 90 minutes Thursday, May 16, from attorneys representing tribal leaders, as well as from attorneys representing 306 Nooksacks who have been told they are subject to removal from the tribe’s membership rolls because of alleged deficiencies in their tribal ancestry. Total tribal membership is about 2,000. Bellingham Herald, 5-16-13.

Student-services workers at Evergreen State College voted 45-5 Wednesday to authorize actions “up to and including a strike” as they continue negotiating with college leaders on a two-year labor contract. The workers are represented by the Washington Federation of State Employees. Their overwhelming vote does not mean a strike will happen, but it could offer leverage when they go into another session of contract talks Tuesday with the administration. Top issues are pay and what both sides describe as a “just cause” process for handling disciplinary issues and firings at the four-year school. The 55 affected workers include academic counselors, academic advisers, dorm residence directors, athletic coaches, mental health advisers and career development staff. Olympian, 5-16-13. 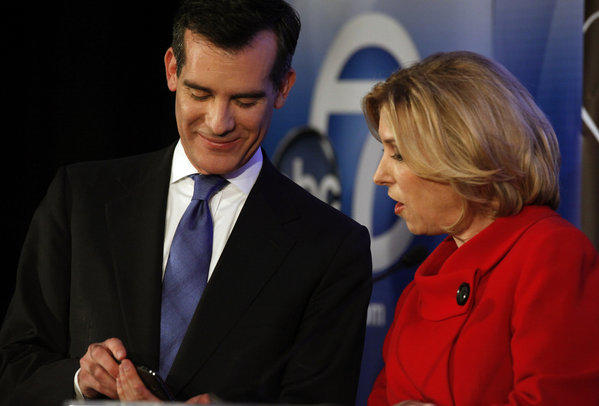 The importance of Latinos in next week’s mayoral election was highlighted again Wednesday as a new round of dueling attacks ads emerged seeking to undermine both candidates’ appeal to Spanish-speaking voters. In one spot appearing on Spanish-language television channels, longtime Democrat Wendy Greuel is criticized for having been registered as a Republican in the early 1990s during the era of former Gov. Pete Wilson—a figure reviled by many Latinos for his sponsorship of a ballot measure to deny immigrants in the country illegally certain government benefits. In a separate Spanish-language TV ad scheduled to air Thursday, candidate Eric Garcetti is accused of wearing a “Latino mask” and forcing working-class Latinos out of Hollywood during his revitalization efforts there. Los Angeles Times, 5-15-13.

Op-ed: Take politics away from the IRS

Obama’s decision Wednesday to dismiss the acting commissioner of the IRS was a largely symbolic demonstration of anger and authority. The official, Steven Miller, was not directly involved in the misguided decision to single out Tea Party groups for special scrutiny in granting tax exemptions. More important is Obama’s promise to clarify the extremely vague tax laws, which are the root cause of the problems in both the IRS and the political system. Social-welfare groups of all political stripes, known in the tax code as 501(c)(4) organizations, had for years abused their tax exemptions through excessive political activity, and the IRS should have cracked down on them without regard to ideology. New York Times, 5-15-13.

In IRS scandal, why is any political group exempt from taxes?

A large crowd waved signs and banners during a 2011 Tea Party rally in Columbia, South Carolina.

The IRS is under fire for giving extra scrutiny to conservative organizations that asked for tax-exempt status. But the scandal prompts a broader question: Why are political organizations getting this government subsidy anyway? The section of the tax code sought by the tea party groups was established for the benefit of groups that promote social welfare, generally nonprofit operations. Examples on the IRS website involve community service and groups that provide a certain local benefit. Somewhere along the line, this longstanding classification has become a loophole exploited by groups seeking to elect Democrats, Republicans and most recently tea party candidates and like-minded groups. Miami Herald, 5-16-13.

As we move toward the fifth anniversary of the great financial crisis of 2008, people should be outraged that cutting Social Security is now on the national agenda, while taxing Wall Street is not. After all, if we take at face value the claims made back in 2008 by Fed Chairman Ben Bernanke and former Treasury Secretaries Henry Paulson and Timothy Geithner, Wall Street excesses brought the economy to the brink of collapse. But now the Wall Street behemoths are bigger than ever and President Obama is looking to cut the Social Security benefits of retirees. That will teach the Wall Street boys to be more responsible in the future. Dean Baker, Huffington Post, 5-15-13.