The most effective member of Congress 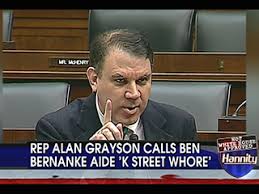 One of the more idiotic beltway tropes is the old “both sides do it” nonsense, used most often by timorous journalists who are afraid of crazed conservatives calling them liberal if they describe what conservatives are actually doing. Last Wednesday provided a perfect example, with this charmingly naive little piece by someone who works for Charlie Cook, in which he calls this Republican House candidate the most frightening politician he’s ever interviewed because she couldn’t cite sources for her claim that climate change is a hoax. (This guy doesn’t get around much, apparently. I can’t imagine there’s even one climate denier who can do that …) Anyway, he naturally had to compare this foolish, superstitious lady with .. you guessed it … Alan Grayson. Because both sides do it. Except for the fact that Grayson is a brilliant and effective congressman who not only leads the progressive wing of the party, he also gets more actual legislation accomplished than any other Democratic congressman. Heather Digby Parton, Hullaballo, 7-31-14.