(Daily Clips will not publish Monday, May 27, because even your Daily Clips editor needs a holiday once in a while.)

The Skagit River Bridge wasn’t particularly worrisome to state engineers, but bridges of its generation often were designed in such a way that a failure in a key location could ruin an entire span.

The Skagit River Bridge wasn’t particularly worrisome to state engineers. Structural inspections showed its condition to be average. But bridges of its generation, circa 1955, often were designed in a manner described today as fracture-critical — meaning a failure in a key location can ruin an entire span. That is apparently what happened Thursday night. Officials believe an oversized truck traveling south on Interstate 5 hit the bridge and triggered the collapse, said Bart Treece, state Department of Transportation (DOT) spokesman. One of the bridge’s four spans fell into the water. Seattle Times, 5-24-13.

A group of residents who oppose extending light rail into Vancouver filed a lawsuit against the city on Thursday, arguing the city council overstepped its authority when it voted to not place a proposed initiative on the November ballot.

A group of residents who sponsored an anti-light rail initiative filed a lawsuit against the city of Vancouver Thursday in Clark County Superior Court, arguing the city council had no authority to refuse to place the measure on the ballot. The petitioners ask a judge to rule that the proposed initiative “is within the scope of the initiative power as defined and declared in the Vancouver City Charter,” and that the proposed language is “clear and unambiguous.” Petitioners want a judge to order that the initiative must be on the Nov. 5 general election ballot. The initiative would create a city ordinance that would prohibit any city resources from being used to extend TriMet’s MAX line from Portland to Vancouver as part of the Columbia River Crossing. Vancouver Columbian, 5-23-13.

Port of Tacoma to build terminal for crude oil trains Crude oil for Washington refineries will go by train to a new terminal at the Port of Tacoma.

The Port of Tacoma has decided to invest at least $80 million in a terminal to receive crude oil brought by railroad from Montana, at a site where a container terminal was once planned. The petroleum terminal is to be built on an 80-acre site, formerly the location of the Kaiser Aluminum smelter, where the port until recently had planned to build another container terminal for imports. Some of the crude could be refined by nearby U.S. Oil, while the crude also could be barged to Washington refineries to the north and elsewhere on the West Coast. Puget Sound Business Journal, 5-23-13.

Washington state’s new attorney general, Bob Ferguson, took office in January, an interesting time with the state facing national scrutiny over its legalization of marijuana and gay marriage. Elected last fall after Republican Rob McKenna ran for governor rather than re-election, Ferguson, a Democrat, did not shy from that national spotlight. His anti-discrimination lawsuit last month against Arlene’s Flowers of Richland, whose owner refused to sell flowers for a gay wedding, instantly became a national story. Ferguson discussed that and other issues in an interview Wednesday during a visit to Yakima. He conducted the interview after meeting with the Yakima County Gang Commission. Bob Ferguson Q & A with Yakima Herald-Republic, 5-23-13.

Op-ed: The multiplier effect of skimping on higher education 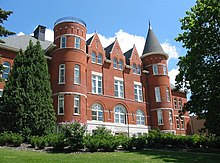 For too long the Legislature has been pinching pennies on funding for higher-ed institutions, and students have paid the price in higher tuition. Give it a rest. Invest a scant amount of money and freeze tuition for two years, at least. Lecture halls full of political-science and art-history majors have subsidized engineering classes for generations. The arithmetic works out fine. Quit dreaming up schemes to mug students. Lance Dickie, Seattle Times, 5-23-13.

One early measure of the Seattle mayoral race is the fight for endorsements from the city’s Democratic legislative-district organizations. So far, Mayor Mike McGinn has come up short in his quest to land those endorsements for his re-election campaign. He’s received just one – from the 37th District Democrats (southeast Seattle, including Rainier Valley, Central District and Columbia City), who gave a dual endorsement to McGinn and City Council member Bruce Harrell. Asked whether the paucity of Democratic endorsements is a problem for the mayor, McGinn political consultant John Wyble responded via email: “Mayor McGinn was the only candidate that was in the game in every District. We feel good that he’s got a base of support in every district against a lot of well-known candidates.” Seattle Times, 5-23-13.

The city has hired an investigator to look into a complaint filed against Federal Way Mayor Skip Priest. In response to a public records request by the Federal Way Mirror, the city released a five-page document that was submitted on May 9 by Federal Way City Council member Kelly Maloney. The document details Maloney’s account of a meeting that took place with Priest on May 8. The document describes how during their nearly 30-minute meeting, Priest was angry, pounding his fist on the desk and “lacing the ‘F’ word throughout his statements as he was yelling.” According to the document: “I told him he had better back off and stop talking to me that way. (I did not raise my voice because I wanted to be firm and not escalate the situation.) I told him I wasn’t afraid of him, though clearly he was trying to intimidate me. He sat down. He started crying.” Federal Way Mirror, 5-23-13. 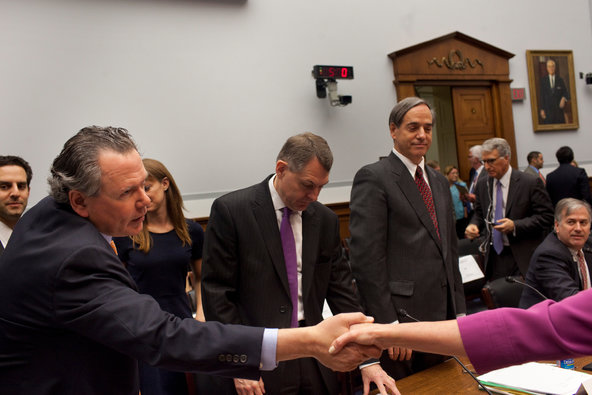 Bank lobbyists are not leaving it to lawmakers to draft legislation that softens financial regulations. Instead, the lobbyists are helping to write it themselves. One bill that sailed through the House Financial Services Committee this month — over the objections of the Treasury Department — was essentially Citigroup’s, according to e-mails reviewed by the New York Times. The bill would exempt broad swathes of trades from new regulation. In a sign of Wall Street’s resurgent influence in Washington, Citigroup’s recommendations were reflected in more than 70 lines of the House committee’s 85-line bill. Two crucial paragraphs, prepared by Citigroup in conjunction with other Wall Street banks, were copied nearly word for word. (Lawmakers changed two words to make them plural.) The lobbying campaign shows how, three years after Congress passed the most comprehensive overhaul of regulation since the Depression, Wall Street is finding Washington a friendlier place. New York Times, 5-23-13.

Attorney General Eric Holder signed off on a controversial search warrant that identified Fox News reporter James Rosen as a “possible co-conspirator” in violations of the Espionage Act and authorized seizure of his private emails, a law enforcement official told NBC News Thursday. The disclosure of the attorney general’s role came as President Barack Obama, in a major speech on his counterterrorism policy, said Holder had agreed to review Justice Department guidelines governing investigations that involve journalists. NBC News, 5-23-13.

Gov. Rick Perry says he’s disappointed with the Boy Scouts of America allowing openly gay boys to be accepted as Scouts. The organization’s National Council voted Thursday to ease its long-standing ban. Perry, an Eagle Scout, wrote a 2008 book praising the organization and saying it should continue to exclude openly gay members. In February, he dismissed bending the group to the whims of “popular culture.” The governor released a statement Thursday night saying BSA “has been built upon the values of faith and family for more than 100 years, and today’s decision contradicts generations of tradition in the name of political correctness.” Associated Press (KSAT), 5-23-13.

The secret sharer: Is Thomas Drake an enemy of the state?

Thomas Drake, a former senior executive at the National Security Agency, faces some of the gravest charges that can be brought against an American citizen.

On June 13th, Thomas Drake, 54, a former government employee, is scheduled to appear in a courtroom in Baltimore, where he will face some of the gravest charges that can be brought against an American citizen. A former senior executive at the National Security Agency, the government’s electronic-espionage service, he is accused, in essence, of being an enemy of the state. According to a ten-count indictment delivered against him in April, 2010, Drake violated the Espionage Act—the 1917 statute that was used to convict Aldrich Ames, the CIA officer who, in the eighties and nineties, sold U.S. intelligence to the KGB, enabling the Kremlin to assassinate informants. In 2007, the indictment says, Drake willfully retained top-secret defense documents that he had sworn an oath to protect, sneaking them out of the intelligence agency’s headquarters, at Fort Meade, Maryland, and taking them home, for the purpose of “unauthorized disclosure.” If convicted, he faces a 35-year prison term. When President Barack Obama took office, in 2009, he championed the cause of government transparency, and spoke admiringly of whistle-blowers, whom he described as “often the best source of information about waste, fraud, and abuse in government.” But the Obama Administration has pursued leak prosecutions with a surprising relentlessness. Jane Mayer, New Yorker, 5-23-13.