State Rep. Dave Upthegrove (D-33) said Tuesday he is running for for King County Council Position 5 to replace Julia Patterson, who said last week she will not seek re-election after 12 years on the council. “It’s hard to imagine someone in South County who has a better understanding of local government or has a tighter connection to this community.” Patterson said in a Upthegrove media release. “Dave Upthegrove will hit the ground running and serve this community with distinction.” Upthegrove is currently Chair of the House Environment Committee and also serves on the Local Government and Transportation Committees. He has been involved in education policy, sponsoring and passing legislation to improve the teaching of civics, and to better meet the needs of recent immigrant students. The Washington Conservation Voters named Upthegrove their “Legislator Of The Year” in 2011. Kent Reporter, 4-30-13. At a press conference last night, the group of teachers announcing their continued boycott of Seattle Public Schools’ use of the MAP standardized test encouraged parents to participate by opting their kids out of the MAP test. The spring window for testing started last week and goes through early June; parents can opt their child out of nearly any standardized test by sending written notice to a school administrator that they wish to do so. Phil Sherburne, president of the Garfield PTSA, said parents there “joined with staff at the school” in opposition to this test, made it clear to all parents that they could opt their kids out of testing, and that “an overwhelming majority of them did that.” The Stranger, 4-30-13.

The Seattle police officers’ union has reached a tentative agreement on a new four-year contract with the city, the union head said Tuesday afternoon. Sgt. Rich O’Neill, 54, who has been president of the Seattle Police Officers’ Guild (SPOG) since 2006, spoke during an invitation-only news conference at union headquarters. The guild represents about 1,250 members, including officers and sergeants. The agreement is still subject to a vote by SPOG members and City Council ratification. The tentative contract covers the period from 2011 through 2014. The agreement provides for a cost-of-living increase, which O’Neill declined to disclose until he meets with SPOG members. SPOG has been working without a contract since the previous one expired in 2010. Seattle Times, 4-30-13.

Toxics bill dies at session’s end; advocates on both sides want to revive it in special session but disagree on how

A bill that would outlaw two Tris chemicals used as flame retardants in consumer products died when the Washington Legislature’s regular session ended Sunday. But Democratic Sen. Sharon Nelson (D-34) said she is working to revive a stronger measure than business groups and the chemical industry wanted. Her Republican counterpart, Sen. Doug Ericksen (R-42), said he also wants to pass a flame-retardants bill that is less sweeping, while waiting to see what emerges from reviews of the industry’s chemicals by the federal Environmental Protection Agency. At issue is how far the state should go in banning chemicals after a landmark 2008 phased out the use of toxic PBDEs in children’s products. Olympian, 4-30-13.

Spokane police have a new responsibility: enforcement of smoking laws. The Spokane City Council Monday unanimously gave its police officers the power to write $50 tickets for violating smoking rules approved by Washington voters in 2005. City Council members said they were surprised to learn that no agency in Spokane appears to have the ability to cite smokers who violate the law, which prohibits smoking within 25 feet of building entrances, windows that open and vents. “If we don’t have any enforcement and a building owner feels that they are being unduly affected by smokers violating the 25-foot rule, they’ve got to have some ability to address that,” Councilman Jon Snyder said. The law requires that officers give violators a warning before issuing a ticket. Spokesman-Review, 4-30-13.

A key Port of Tacoma container terminal was reopened Tuesday afternoon after  a group of retired longshore union workers removed pickets from the facility on Port of Tacoma Road. Those picketers had shut down the Washington United Terminal early Tuesday to force some action on their complaints regarding the Pacific Maritime Association’s alleged failure to pay retiree medical bills. The PMA represents waterfront employers including shipping lines and terminal operators. The retirees, an arbitrator and officials from the longshore union and the PMA scheduled a meeting Tuesday afternoon after the picketing had halted activity at the terminal. “PMA employers are taking away medical insurance from ILWU pensioners, their surviving spouses and children,” said the retiree group, the Pacific Coast Pensioners Association. Tacoma News Tribune, 4-30-13.

FDA: Plan B will be over the counter for women 15 and over The Food and Drug Administration said late Tuesday that it had approved a drugmaker’s application to sell the emergency contraceptive Plan B One-Step over-the-counter to women 15 and older. This is not, as the FDA points out in a statement, a response to the recent court decision on emergency contraceptives. In that April 5 case, a federal judge ordered the Obama administration to make Plan B available over the counter to women of all ages — not just those who are 15 and older. “The Department of Justice is considering next steps in the litigation,” FDA officials said in a statement. “In the meantime, the FDA took independent action to approve the pending application on Plan B One-Step for use without a prescription by women 15 years of age or older.” Washington Post, 4-30-13. Michelle Rhee’s controversial education reform nonprofit StudentsFirst recently selected a virulently anti-gay lawmaker as the organization’s “reformer of the year.” StudentsFirst’s honoree, Tennessee state Rep. John Ragan, is the co-sponsor of the state’s shameful (and, thankfully, failed) “Don’t Say Gay” legislation, a measure that would have banned teachers from discussing sexuality that is not “related to natural human reproduction” in the classroom. The bill was a barely-concealed attempt to prevent teachers from talking about the existence of gays and lesbians with their students, and would have enshrined anti-gay discrimination in Tennessee law and educational policy. Additional language in Ragan’s measure would have compelled educators and school therapists to “out” students they suspected of being gay to parents or guardians. Salon, 4-29-13. 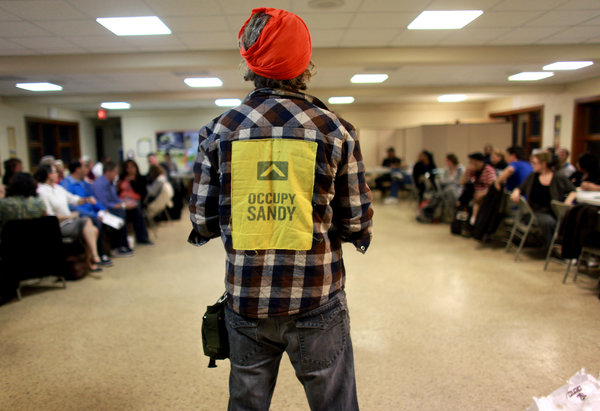 Goldi Guerra, a member of Occupy Sandy, spoke during a storm-recovery meeting with community members in April at a church on Staten Island.

Not long ago, the Occupy Wall Street movement seemed poised to largely fade from the national conversation with few concrete accomplishments beyond introducing its hallmark phrase, “We are the 99 percent.” Then Hurricane Sandy struck, and Occupy Wall Street protesters rushed to apply their rabble-rousing hustle to cleaning out houses, clearing debris, and raising more than $1.5 million for relief efforts. In some minds, Occupy members had become less a collection of disaffected class warriors than a group of efficient community volunteers. Occupy Sandy, as the effort came to be known, became one of the most widely praised groups working on the storm recovery. As Occupy members around the country plan the movement’s annual May Day protests, a central question has emerged: whether Occupy Sandy represents a betrayal of the Occupy movement, or its future. New York Times, 4-30-13.