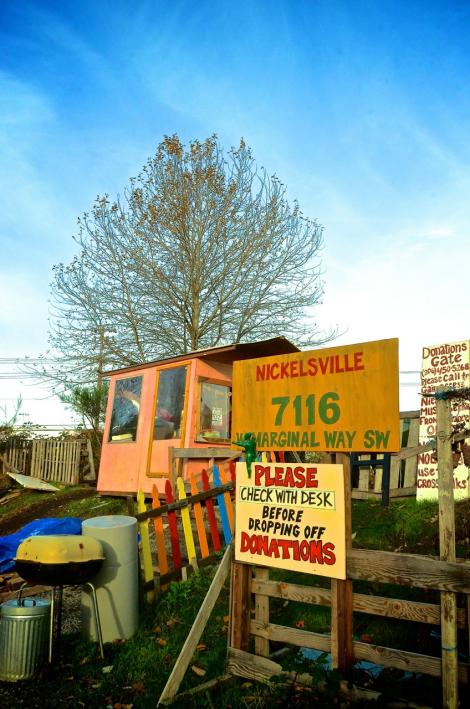 An entrance to Nickelsville.

The U.S. Attorney’s Office announced an 11-year prison sentence for Shane Stephen Anello on March 29, in part for his guilty plea to a federal charge of unlawful possession of a destructive device. That charge stemmed from an April 2012 incident where Anello threw a “firebomb” at a vehicle parked at Nickelsville, the homeless encampment at Highland Park Way SW and W Marginal Way SW in West Seattle. Police said Anello threw a Molotov cocktail “at the car belonging to the person who had barred him from returning to the homeless camp.” Luckily, no one was hurt. Nickelsville continues to have problems with trouble tenants and a legal inability to legally evict someone from the camp located on public land. West Seattle Herald, 3-29-13.

Jesse Hagopian, left, a Garfield teacher, spoke out against MAP testing during a noontime teacher rally in February.

The set of exams now under attack in Seattle was originally developed in the 1970s by an informal group of school administrators from Washington and Oregon, an attempt to improve upon the tests of their day. They created a new set of tests they hoped would provide better information about how all their students were doing — exams measured academic growth, rather than just overall achievement. What changed? The MAP itself has evolved from paper-and-pencil tests used by a handful of places to an online exam used in more than 5,000 school districts. It has become a big business for the nonprofit Northwest Evaluation Association (NWEA), which reported $84 million in revenues in 2012. Seattle Times, 3-30-13.

The Great American Casino in Kent has asked the City Council to reduce its gambling tax because of heavy financial losses.

The Kent City Council will consider an ordinance at its 7 p.m. meeting Tuesday at City Hall to cut the city’s gambling tax on gross revenues of casino card rooms from 11 percent to 7 percent, to help the Great American Casino reduce its losses. The council’s Operations Committee voted 2-1 on March 19 to reduce the tax. At least four of the seven council members must approve the tax cut. Great American paid $335,000 in gambling taxes to the city last year and is expected to pay about $330,000 this year, said John Hodgson, city chief administrative officer. At 7 percent, the city would see that annual amount drop by about $120,000. A 4 percent rate would drop the city revenue by about $210,000 per year. Kent Reporter, 3-29-13.

Auburn resident Claude DaCorsi has announced his intention to run for Auburn City Council Position 2. Incumbent John Partridge is running for mayor. DaCorsi, director of capital construction for the King County Housing Authority, said the $20 million worth of work KCHA has invested in its Auburn properties in the last few years has given him a seat at the table at a number of housing meetings and presentations, and, crucially, a chance to talk with the mayor and city staff. DaCorsi, who oversees a budget of about $25 million a year in his King County job, said he has a proven track record as a good steward of money and is always careful to ensure that the revenue and expenditure sides of the ledger balance. Auburn Reporter, 3-29-13. 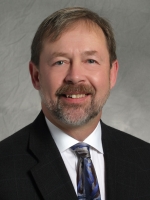 North Bend prosecutors have asked King County to decide whether to file a criminal charge against Mayor Ken Hearing, who was arrested last Tuesday on suspicion of hitting his wife with a golf club. Hearing pleaded not guilty Wednesday to fourth-degree assault in Issaquah Municipal Court. North Bend prosecutors later moved to dismiss the misdemeanor charge and referred the case to the King County Prosecuting Attorney’s Office to avoid a conflict of interest. Hearing and his wife both said he struck her in the leg around 2 a.m. Sunday with a golf club the wife identified as a five iron, West said. Investigating officers reported the wife, who appeared to be intoxicated, had a bruise on her right thigh. Hearing, who was first elected mayor in 2003 and has been re-elected two times since then, owns and operates Scott’s Dairy Freeze in North Bend. Seattle Times, 3-29-13.

Suppose a deal that promised more for less turned out to be less for more. Pierce County leaders are beginning to wonder whether that’s the takeaway from a 4-year-old experiment that handed the local mental health system to an out-of-state corporation. OptumHealth, a subsidiary of Minnesota-based United Health Care, is the only privately run Regional Support Network in the state. It’s not the largest, but it takes more taxpayer money for administration and profit than any of its public peers — sometimes three, four and five times as much, according to state records. Pierce County Executive Pat McCarthy doesn’t fault the company for acting like a business — but she questions the state’s oversight of Optum, and a contract that allows so much public money intended for mental health services to leave the state in the midst of crisis, when funding is precious. Tacoma News Tribune, 3-31-13.

A key Washington state lawmaker wrote in a Friday editorial that state funds are too scarce to extend need-based college aid to illegal immigrants, dimming the prospects of HB 1817, the measure supporters call the Washington Dream Act. Sen. Barbara Bailey (R-10), chair of the Senate Higher Education Committee, wrote in a pro-business website that the state makes too many promises it can’t afford to keep, and that the measure, if enacted, would likely amount to another. Bailey’s committee held a hearing on the measure Thursday, but she could refuse to schedule a vote. The bill has attracted a measure of bipartisan support. KPLU, 3-29-13.

Limiting the trade-in exemption: what it would mean

As part of Gov. Jay Inslee’s first budget proposal Thursday, he pushed for alterations to many of the state’s current tax exemptions – including the tax exemption placed on the trade-in of cars, boats and other items. While the exemption applies to many items – anything where a trade-in might occur, really – it mainly benefits car dealerships, by inspiring would-be car buyers to trade in their used cars rather than sell them to a private buyer. In theory, the tax exemption – which traces back to an overwhelmingly approved 1984 voter initiative – is designed encourage the purchase of new items (again, specifically cars). Under estimates provided in Inslee’s budget, this maneuver would generate $94.8 million in general fund dollars for the 2013-2015 biennium, and $106.9 million for the 2015-2017 biennium. Inslee’s budget estimates the change would affect roughly 85,000 taxpayers. Seattle Weekly, 3-29-13. Environmentalists and labor leaders say they expect to keep on pressing for specific language in waterfront development plans to ensure that the estimated thousands of new jobs there are “living wage.” Mark Lowry, president of the Northwest Washington Central Labor Council, said the labor-environment coalition is going to keep up the pressure on that issue as waterfront plans move from the Bellingham Planning Commission to City Council. Lowry said he and others want to see firm language in waterfront land-use plans that will deliver better-paying jobs, not just service jobs. Bellingham Herald, 3-30-13. Virginia Gov. Bob McDonnell speaks to the press in front of a statue of George Washington at the Capitol on Feb. 5 in Richmond.

Gov. Robert F. McDonnell and his wife Maureen had about 200 guests to Virginia’s historic Executive Mansion for their daughter Cailin’s wedding in 2011. The menu included fresh poached jumbo shrimp, bruschetta topped with Virginia tomatoes, and stuffed free-range chicken breast. The $15,000 worth of fine dining came courtesy of Jonnie R. Williams Sr., CEO of a company that has made major contributions to McDonnell’s campaigns and that is the subject of a federal securities investigation. The wedding gift, which was not disclosed by McDonnell, is just one element of the McDonnells’ close relationship with Williams and his company, a relationship that has included rides on Williams’s corporate jet, personal gifts to the first family and efforts by the governor and his wife to promote the company. Washington Post, 3-30-13.

When Mark Dayton started running for governor, his campaign mantra was shockingly simple: “Tax the rich.” Now that the Democratic-Farmer-Labor governor has a chance to build his first budget from scratch, he wants to lean on high earners in a big way to pay off the state’s $627 million deficit and boost spending for education and other initiatives. If legislators pass Dayton’s plan, 54,440 Minnesota tax filers would have to pay the higher rate, a sliver of the taxpaying public. But a question has arisen from Moorhead to Minneapolis to Rochester: What exactly is “rich”? And who is to decide? Minneapolis Star-Tribune, 3-30-13. 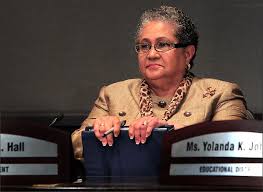 The supposed transformation of Atlanta Public Schools overseen by former Superintendent Beverly Hall resulted from a criminal enterprise that victimized thousands of struggling students for years, authorities alleged Friday. Capping a series of investigations that spanned four years, a Fulton County grand jury indicted Hall and 34 others on charges that they conspired to cheat on federally mandated standardized tests from at least 2005 to 2010. Further, the grand jury charged, Hall, several top aides, principals and teachers engaged in the scheme for their own financial gain. And with investigators closing in, the jury said, Hall and others lied to cover up their crimes. Atlanta Journal Constitution, 3-29-13. Even setting aside criminal culpability, the indictment portrays a workplace with a toxic culture in which leaders routinely sacrificed their integrity to preserve the district’s image — and Hall’s. Desired results, no matter how unlikely, drew little skepticism, grand jurors found. Truth-telling, on the other hand, could result in severe punishment. Employees who reported cheating put their jobs in jeopardy, and the indictment recounts how Hall lightly punished a cheating teacher but fired the whistleblower. Atlanta Black Star, 3-31-13.

Gov. Pat Quinn’s executive inspector general has opened an investigation into the politically influential United Neighborhood Organization’s use of a $98 million state grant for new charter schools, after a report in the Chicago Sun-Times that UNO gave millions of dollars in contracts for the schools to companies with ties to the organization’s top officials. Executive Inspector General Ricardo Meza’s office asked the state Department of Commerce and Economic Opportunity in a letter Feb. 14 to turn over all records regarding the grant, state officials disclosed Friday. Meza sent a similar request to Juan Rangel, UNO’s chief executive officer, sources said. Rangel­ — who co-chaired Rahm Emanuel’s mayoral campaign — did not return calls Friday. Chicago Sun-Times, 3-29-13.

Heather Dew Oaksen, a professor at Cornish College of the Arts, wound up teaching at Green Hill juvenile prison in Chehalis because of an incident with a gun. In March 1994, a 16-year-old female student was killed by a stray bullet in a drive-by shooting outside Ballard High School. “And the drug wars spilled over into the middle class,” Oaksen said recently. The girl’s murder caused Oaksen to ponder how she could use art to improve the lives of young people. Through a series of personal connections, in 1995 she was offered the chance to teach at Green Hill. At the facility, she overheard young men talk about their lives. Green Hill’s superintendent gave her permission to create a film if she would teach video production to her students. Oaksen decided to make a documentary about some of the young men and to track their lives when they left Green Hill. The result is “Minor Differences.” A low-budget documentary, it chronicles five troubled boys who attempt to change the course of their lives over 18 years, as they venture into adulthood. The Rainier Valley Cultural Center will present a screening Sat., April 6 at 3 p.m. Real Change, 3-27-13.