Inslee on budget: ‘I choose education over tax breaks’

Gov. Jay Inslee prescribed his plan Thursday for pumping $1.3 billion more into the state’s public school system, then challenged lawmakers to buck up and pay for it by ending popular tax breaks and extending taxes set to expire this summer. The first-term governor wants to fund full-day kindergarten in high poverty schools and make preschool available for more children of low-income families. He also wants to pay for smaller kindergarten and first grade classes, beef up reading intervention and dropout prevention programs, and hire 1,400 secondary school teachers to add courses in middle and high schools. To pay for his education plan, Inslee wants to generate $565 million by repealing or revising 11 tax exemptions, most of which have been a political hit list before and survived. Among them are ones that could lead to bottled water getting taxed and Oregon residents paying sales taxes. Everett Herald, 3-28-13.

T Tank Farm on the Hanford nuclear reservation is where three of the six tanks believed to be leaking are located. The Department of Energy is proposing to send waste from the three tanks to t he Waste Isolation Pilot Plant in New Mexico for disposal, but Hanford Challenge says that would be costly and illegal.

Sending up to 3.1 million gallons of radioactive waste to New Mexico for disposal is no solution to Hanford’s leaking underground tanks, according to Hanford Challenge and two other environmental groups. Hanford Challenge of Seattle, the Southwest Research and Information Center of Albuquerque NM, and the Natural Resources Defense Council’s nuclear program in Washington DC, have sent a joint letter to Energy Secretary Steven Chu. A Department of Energy proposal to send some of Hanford’s tank waste to the Waste Isolation Pilot Plant, or WIPP, near Carlsbad NM is costly, unwise and illegal, said the letter. Tri-City Herald, 3-27-13.

A group of House Republicans think Washington can create a lot of jobs and generate a bunch of revenue by getting makers of ammunition and firearms parts to set up shop in the state. HB 2020 calls on the state to “encourage the manufacture of smokeless propellant, small arms primers, cartridge cases, and small arms ammunition and firearm parts and accessories within the borders of Washington.” By encourage, sponsors mean to assist manufacturers in locating in Washington. The bill, if it becomes law, would be named the “Washington state firearms ammunition, parts, and accessories jobs act.” Everett Herald, 3-28-13.

How Tim Burgess thinks he can be elected Seattle mayor

Tim Burgess wants to be a mayor who brings people together. In a visit with Crosscut writers and editors on Thursday, the Seattle City Council member and mayoral candidate said that two of his main goals as mayor would be to create a police department with strong public confidence and to greatly improve transportation. Burgess also emphasized the need for changes to the school system, including the possibility of the city taking over Seattle Public Schools. (with which he just self-sabotaged his entire campaign. Bye, Tim.) Crosscut, 3-29-13. 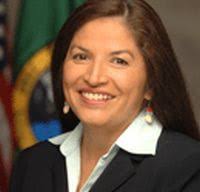 The Port of Seattle Commission has selected seven finalists for an open position left when Rob Holland resigned earlier this month. Four of the finalists were previously finalists for a seat recently filled by Commissioner Courtney Gregoire. Gregoire replaced former commissioner Gael Tarleton, who was elected to the state House of Representatives in November. The finalists for Holland’s seat were chosen from 27 applicants. They will participate in a public forum moderated by KUOW’s Steve Scher  at 6 p.m. April 2 at the port’s Pier 69 Headquarters, 2711 Alaskan Way, Seattle. Seattle Times, 3-27-13. 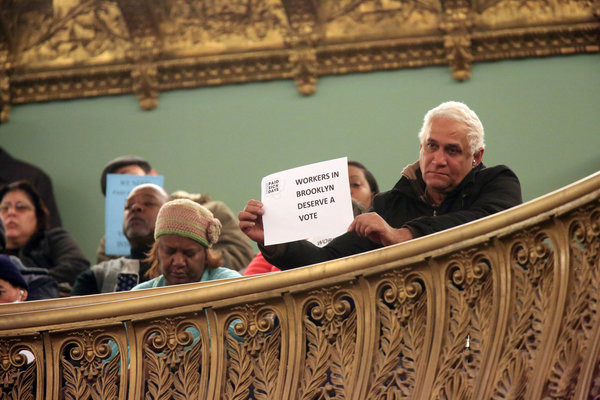 A hearing on paid sick leave last week. The agreement reached on Thursday night is subject to a vote by the City Council after action on the issue had been blocked for three years.

New York City is poised to mandate that thousands of companies provide paid time off for sick employees, bolstering a national movement that has been resisted by wary business leaders. A legislative compromise reached on Thursday night represents a raw display of political muscle by a coalition of labor unions and liberal activists who overcame fierce objections from New York’s business-minded mayor, Michael R. Bloomberg, and his allies in the corporate world. New York Times, 3-28-13.

An Orlando judge Wednesday sentenced Jim Greer, former high-flying chairman of the Florida GOP, to 18 months in prison for stealing $125,000 from the party. It was a humbling end for a man who, until four years ago, wielded enormous political power in Florida and was part of then-Gov. Charlie Crist’s inner circle. Greer had pleaded guilty six weeks ago to stealing $125,000 from the state party while serving as its chairman. The crimes: four counts of theft and one of money laundering. Orlando Sentinel, 3-27-13. 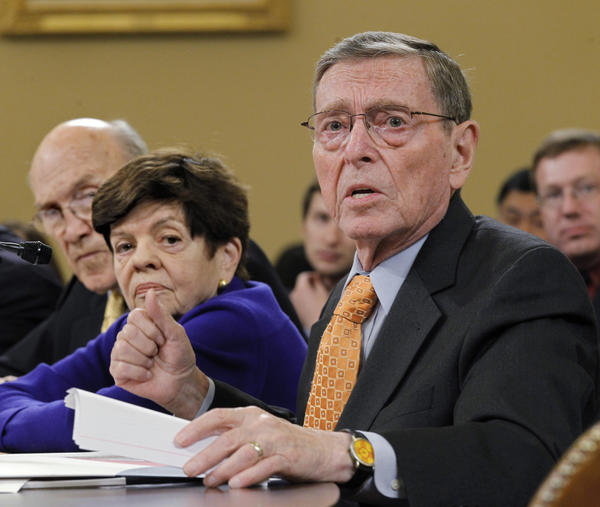 Robert M. Ball is one of the most revered figures in Social Security history, a man whose devotion to safeguarding the program from ideological attacks and political cant over six decades made him the program’s “undisputed spiritual leader.” Alice M. Rivlin is a distinguished budget expert at the Brookings Institution whose willingness to promote “entitlement reform” (read: cut benefits) as a deficit nostrum has given her a reputation as a danger to Social Security and Medicare. So when Rivlin was named the ninth recipient of the annual Robert M. Ball Award for Outstanding Achievements in Social Insurance this week, Social Security advocates erupted in fury. Los Angeles Times, 3-27-13.

When workers die: “And nobody called 911″ Carlos Centeno, a Chicago-area temporary worker who died after a workplace accident, and his partner, Velia Carbot.

By the time Carlos Centeno arrived at the Loyola University Hospital Burn Center, more than 98 minutes had elapsed since his head, torso, arms and legs had been scalded by a 185-degree solution of water and citric acid inside a factory on Chicago’s southwestern edge. The laborer, assigned to the plant that afternoon in November 2011 by a temporary staffing agency, was showered with the solution after it erupted from the open hatch of a 500-gallon chemical tank he was cleaning. Factory bosses, federal investigators contend, refused to call an ambulance as he awaited help, shirtless and screaming. He arrived at Loyola only after first being driven to a clinic by a co-worker. A narrative account of the accident that killed him — and a description of conditions inside the Raani Corp. plant in Bedford Park, Ill. — are in a U.S. Occupational Safety and Health Administration memorandum obtained by the Center for Public Integrity. The 11-page OSHA memo of May 10, 2012, argues that safety breakdowns in the plant warrant criminal prosecution — a rarity in worker death cases. Salon, 3-27-13.