City Attorney Pete Holmes office filed a motion Monday seeking to bump a lawsuit filed by local police unions, which could stymie Seattle’s efforts at police reform, from superior court to federal district court. The city is working with an independent monitor, Merrick Bobb, to draft a plan to reform our forceful police department at the behest of the Department of Justice. The police unions’ lawsuit argues that the reform plan would infringe upon their collective bargaining rights, so they’re suing to stop it. Holmes’ latest motion is a seemingly mundane read, but moving the police-union lawsuit from King County Superior Court to US District Court could be the quickest way to kill it altogether. The Stranger, 3-18-13. “Before this city buys any [more] surveillance equipment or drones, [we’re saying] they cannot do this without prior council approval,” explained Seattle City Council member Nick Licata before the council unanimously approved new legislation governing how and when the city can use and operate surveillance equipment or aerial unmanned drones. The legislation comes after Council members were surprised to learn that the police department had acquired several aerial drones via a federal grant, and Seattle residents unpleasantly discovered 30 surveillance cameras being erected along Seattle’s waterways—most notably, Alki Beach. Despite council assurances that the legislation would promote transparency and public awareness of new surveillance systems, the bills’ vote was followed by angry chanting from the crowd. The Stranger, 3-18-13.

Burien City Council members voted to censure Councilman Jack Block Jr. at Monday night’s meeting. Mayor Brian Bennett and Council members Rose Clark, Joan McGilton, and Gerald Robison voted for the censure. Deputy Mayor Lucy Krakowiak and Councilman Bob Edgar abstained from voting, as did Block. The focus of the censure was a photo of a scantily clad woman in lingerie that Block posted on his personal Facebook page last Christmas Eve. On making the motion for censure, Robison called the posting inappropriate material that cast the city in a bad light. After the vote, Block said he is “an imperfect human being” but attributed the censure – which carries no penalty – largely to council politics. B-Town Blog, 3-19-13.

Northeast Burien resident Marlene Allbright, who works as a Special Education teacher in the Seattle School District, Monday announced her candidacy for the Burien City Council. Allbright intends to run for one of the four available seats (currently held by Brian Bennett, Jack Block Jr., Rose Clark, and Joan McGilton), joining other announced candidates Joey Martinez and Lauren Berkowitz. “I am a resident of NE Burien, who was opposed to being annexed into Burien,” Allbright said in a statement. “I did not feel that the City of Burien would be able to represent me. My fears have been confirmed by the recent proposal of the current four member majority of the Burien City Council, to take away my democratic rights through dividing the City Council into wards.” B-Town Blog, 3-18-13. 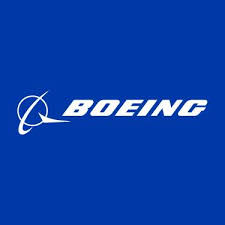 Boeing technical workers voted Monday to accept the company’s labor contract, bringing to an end nearly a year of contentious union negotiations for the jet maker. Technical workers represented by the Society of Professional Engineering Employees in Aerospace approved Boeing’s offer by a margin of 4,244 to 654. This was the same contract that SPEEA technical workers rejected last month, when the union’s engineers accepted Boeing’s offer. Union leaders put the offer up to a vote again when Boeing negotiators refused to budge. The contract ratified Monday includes 5 percent annual increases to wage pools and maintains health care without increasing member contributions. The major change, opposed by SPEEA leaders, is to retirement. New workers will be enrolled in a 401(k) plan rather than a defined benefit pension. Everett Herald, 3-18-13.

The Republican National Committee today released a lengthy report recommending ways to turn around the GOP image and renew its national electoral prospects following a bruising 2012 election. The 100-page report, commissioned by RNC Chairman Reince Priebus, does a fair amount of self-flagellation, noting the GOP’s loss of the popular presidential vote in five of the last six elections. It blames, in part, an insular and stale circle that has left the party “talking to itself” and failing to reach out to independents. It specifically pledges the RNC to making, by June 15, “an investment in field staff beyond traditional battleground states.” But that doesn’t necessarily mean Washington will become a major Republican target. Seattle Times, 3-18-13.

Rodney Tom: No correlation between teacher pay and student achievement

There is no relation between spending on teachers and student achievement in school, Washington’s Senate majority leader said Saturday. Sen. Rodney Tom (“D”-48) told constituents Saturday that a statistical study of the state teachers’ salary structure and graduation rates show no correlation between the two. About 125 people participated in a Saturday 48th Legislative District town hall meeting in Redmond. Crosscut, 3-17-13.

GOP: We’ve been lying all along Boehner: Haha, had you going there, didn’t I?

I never thought I’d write these words, but here goes: Thank you, John Boehner. Thank you, Mr. Speaker, for finally admitting on national television that all the fiscal cliffs, sequestrations, and budget battles you’ve created are, indeed, artificially fabricated by ideologues and self-interested politicians and not the result of some imminent crisis that’s out of our control. America owes this debt of gratitude to Boehner after he finally came clean on yesterday’s edition of ABC’s “This Week” and admitted that “we do not have an immediate debt crisis.” (His admission was followed up by Budget Committee Chairman Paul Ryan, who quickly echoed much the same sentiment on CBS’ “Face the Nation”). This is also about a bigger admission revealing that the GOP’s fiscal alarmism is not merely some natural reaction to reality, but a calculated means to other ideological ends. David Sirota, Salon, 3-18-13.

As Striking Guest Workers Visit NYC Store, McDonald’s Says It Has Cut Ties to Their Franchisee 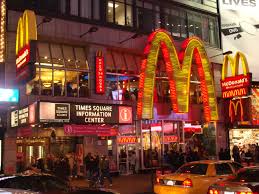 Minutes after striking guest workers protested outside a Times Square McDonald’s, the company’s corporate headquarters announced that it was ending its relationship with the central Pennsylvania franchisee who had employed them. As  The Nation has reported, the guest workers came to central Pennsylvania on J-1 visas, which are officially intended for educational exchange. They allege that McDonald’s franchisee Andy Cheung required them to work shifts of up to 25 hours, refused to pay them for hours they had worked, charged them exorbitant rent for living packed together in basements he owned and threatened to punish them for speaking up. Fifteen workers have been on strike for eight days, working closely with the National Guestworker Alliance labor group. The Nation, 3-14-13.

The U.S. Supreme Court took up its second voting rights case of the month Monday, and for the second time Justice Antonin Scalia’s loud, ultraconservative voice found itself under challenge from Obama appointees Justice Sonya Sotomayor and Elena Kagan. The Supremes are considering a 2004 Arizona law that requires citizens to offer proof of citizenship before they can register.  It runs contradictory to Congress’ 1993 “Motor Voter” law that requires states to offer voter registration forms to of-age motorists renewing their driver’s licenses or applying to social services.  They can swear under oath that they are citizens. Sotomayor, the first Hispanic member of the high court, said she has a “huge difficulty” with the Arizona law and fears that it would impede efforts to register more voters. “I have a real disconnect with this,” she added. Seattle P-I, 3-18-13.

A barista at Philz Coffee in San Jose CA

Nick Taptelis didn’t wait until Monday, when San Jose’s voter-approved minimum wage increase from $8 to $10 an hour officially kicks in, to give his two dozen employees at Philz Coffee a raise. They got it last month. And Taptelis believes that will be good for his downtown cafe business across from San Jose State. “I’ll have a happier team willing to work harder,” Taptelis said. “I think that’s going to increase business.” That may seem counterintuitive, given that business groups spent more than a half-million dollars trying to defeat the measure, which passed with nearly 60 percent approval. But since the election, some businesses — but by no means all — have embraced the inevitable. San Jose Mercury News, 3-11-13.

Strike for America: The CTU and the Democrats 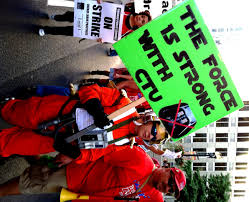 With the rise of a strong neoliberal wing over the last several decades and an increasing number of Democrats no longer even feigning to be troubled with placating unions–once seen as a central constituency for the party–or a broader agenda of equality and social justice, unionists and their partisans have grown increasingly exasperated at party policies that look more and more like those of Republicans. This is particularly true in the case of education reform, where (some) Democrats have swallowed the Right’s free market orthodoxy whole. Much of the party appears to have given up on education as a public project. American teachers unions have been unable to articulate a cogent critique of that shift within the Democratic Party and the policy proposals it has produced. The Chicago Teachers Union has made a decisive break with this approach. The union has been unafraid to identify the education reform agenda pushed by Mayor Rahm Emanuel and his party nationally as an attempt to exacerbate inequalities within the education system, strip teachers of power and erode their standards of living, and chip away at public education as an institution, and to call such Democrats enemies. Rather than continuing an insider strategy that has netted so little for the rest of labor over the years, the CTU has entered into open opposition with the neoliberal wing of the party. Jacobin Magazine.