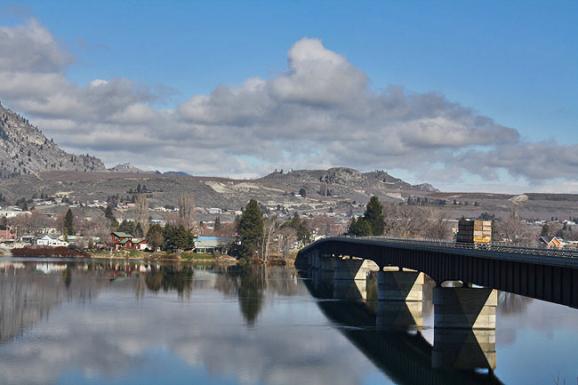 There’s one word that politicians almost always use when they talk about the U.S. immigration system. That word is “broken.” But what does that really mean? Residents of the Okanogan County town of Brewster know. For decades, immigrants have come from Mexico, often illegally, to work the surrounding apple and cherry orchards. Brewster, it turns out, is a microcosm of how the immigration debate is playing out. KUOW, 3-19-13.

Senate majority proposes big spending increase for higher education – but surprise, surprise – won’t say how it will be funded The Senate Majority Coalition rolled out a $300 million plan Tuesday that would partially reverse years of cuts in spending on colleges and universities and hold the line on fast-rising college tuition – but already the signs of conflict are apparent. The majority plan would tell the schools how to spend a big chunk of that money – on students rather than administration. It includes a 3 percent tuition cut over the next two years and more money for financial aid, and it would reward schools based on their progress in meeting student needs. The coalition proposal increases higher ed spending by roughly 10 percent, from the current $2.7 billion to $3 billion. Where that $300 million will come from, no one knows – that’s a matter for budget-writers to consider in the weeks ahead. Washington State Wire, 3-20-13.

Leaders of the Legislature — if they are thinking purely politically — have incentives to ignore many of the ideas coming out of the 26th Legislative District. That stretch of peninsula running from Bremerton to the west side of the Tacoma Narrows bridges is represented by three lawmakers — two of whom could be pitted against each other this fall. One is a minority Republican in the House. Another is a minority Democrat in the Senate. Those two, Rep. Jan Angel (R) and Sen. Nathan Schlicher (D), are likely to be their parties’ choices in a special election in November with big implications for the balance of power in the Senate. And both parties can block the other’s candidate from achieving much to boast about back home. Tacoma News Tribune, 3-19-13.

Taylor promises drone bill will be back next year

Regulation of domestic drones will have its day in the Legislature, Rep. David Taylor (R-15) said Monday, but just not this year. Taylor said his bill, which would have placed restrictions on the purchase and use of drones by police, will be reintroduced next year without any plans to water it down. HB 1771 failed to get a floor vote in either chamber this year. Taylor said Boeing Co., one of the state’s largest employers and drone manufacturers, contributed to the bill’s demise, despite bipartisan support for it. Yakima Herald-Republic, 3-19-13.

The Republican-dominated Senate Majority Coalition is keeping pretty mum on its spending plans. But a growing list of lawmakers is declaring what must be in the budget. The Children’s Alliance, aided by Sen. Joe Fain (R-47), took the lead in rounding up signatures from 25 Senate members – a majority – in support of $42 million for the food assistance program . It was more than an exercise of job skills by the majority coalition’s floor leader; Fain had met during the legislative interim last year with immigrants in his district who were struggling with cuts in the food aid program, according to the alliance. Tacoma News Tribune, 3-19-13.

A new report from Puget Sound Sage finds that Sea-Tac contract workers have by far the worst pay, benefits, and job protections of any major West Coast airport. The Port of Seattle is a taxpayer-funded public agency tasked with creating jobs and promoting economic development; it could impose higher job standards at Sea-Tac if it wanted to, just like the major California airports have. I mean, it’s not like the airlines are going to take their business elsewhere just because they suddenly have to pay the guys fueling their planes a living wage. The Stranger, 3-19-13.

Along with investigating Seattle Public Schools’ record on student discipline, the U.S. Department of Education has four other civil-rights reviews in Washington schools. Seattle is the focus of two of the probes — the investigation into whether black students are disciplined more frequently and more harshly than white students, plus a second review that focuses on students learning English. Seattle Times, 3-19-13.

Mayor Liz Reynolds of Enumclaw kicked off her re-election campaign Monday, seeking a second term. Reynolds won the 2009 election, beating the incumbent John Wise 66 to 34 percent. She noted that because of the recession the city had to implement a financial survival plan requiring, “a mayor that listens to differing opinions while maintaining an open mind” and making “decisions that sometimes were tough and at times unpopular.” Enumclaw Courier-Herald, 3-19-13.

Rep. Jim McDermott (D-WA) gets in a few zingers at the expense of Speaker John Boehner (R-OH).

Rep. Jim McDermott (WA-7) poked fun at House Speaker John Boehner Tuesday after the Republican from Ohio admitted there was no imminent debt crisis. “Our debt is so bad, we’re told, that we have to take food out of the mouths of children through the nutrition program and send seniors out with vouchers to take care of their Medicare. And then this weekend, an epiphany occurred,” he mockingly said on the House floor. Boehner said Sunday on ABC’s This Week that the United States did “not have an immediate debt crisis.” He said Republicans efforts were only aimed at preventing a future debt crisis. Raw Story, 3-19-13.

Why support for gay marriage has risen so quickly Less than a decade ago, almost six in ten Americans said gay marriage should be illegal. Today that same six in ten believe it should be legal. That rapid change — particularly on what had long been a divisive social issue — is remarkable in an age of politics where the entrenchment of the two parties seems close to permanent. And it prompts the question: What the heck happened? The answer comes in two parts — one well understood, the other less so. Washington Post, 3-19-13.

The Westboro Baptist Church just got a big surprise in the form of a new neighbor who plans to give the notoriously anti-gay group from Topeka KS a taste of its own medicine. Aaron Jackson, one of the founders of Planting Peace, a multi-pronged charity that has in the past concentrated on rainforest conservation, opening orphanages, and deworming programs, bought a house that sits directly across from the church’s compound six months ago. Tuesday, he and a team of volunteers painted it to match the gay pride flag. The project — which the nonprofit is calling the “Equality House” — is the first in a new campaign Planting Peace plans to wage against the group. Westboro is known for its intimidating tactics of protesting (or threatening to protest) what they refer to as America’s pro-gay, anti-God agenda, in close proximity to pride parades, soldier funerals and other events like the Sandy Hook memorial services. Huffington Post, 3-19-13. While Congress is working on legislation to re-legalize cellphone unlocking, let’s acknowledge the real issue: The copyright laws that made unlocking illegal in the first place. Who owns our stuff? The answer used to be obvious. Now, with electronics integrated into just about everything we buy, the answer has changed. The issue goes beyond cellphone unlocking, because once we buy an object — any object — we should own it. We should be able to lift the hood, unlock it, modify it, repair it … without asking for permission from the manufacturer. This is a property rights issue, and current copyright law gets it backwards, turning regular people — like students, researchers, and small business owners — into criminals. Wired, 3-18-13.