Don’t be fooled: McConnell’s victory in Kentucky is also a Tea Party win 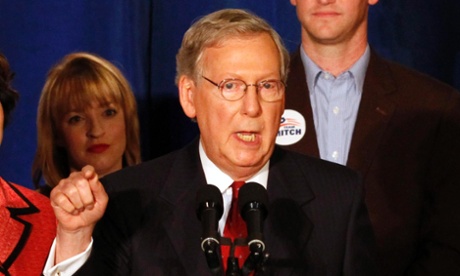 Mitch McConnell addressed supporters Tuesday night, but it wasn’t a eulogy for the tea party insurgency.

Senate minority leader Mitch McConnell’s primary victory Tuesday night in Kentucky will undoubtedly tempt many a pundit to write the Tea Party’s eulogy. But the Tea Party will achieve in electoral death what it could never achieve in life: lasting control of the GOP agenda. McConnell won because he’s got a familiar name, a lot of money and the kind of political clout that makes up for occasional lapses from orthodoxy. That might not be enough next time–as a local Kentucky Republican leader told the National Journal last week, the state party is “still McConnell’s Republican Party, but it’s edging toward being Rand [Paul]’s Republican Party.” What’s happening in the Republican party is the worst of both the Tea Party and more traditional “free-market” (but never really as free as advertised) economics: an aggressive “pro-business” agenda combined with radically retrogressive social policies. Ana Marie Cox, The Guardian, 5-21-14.