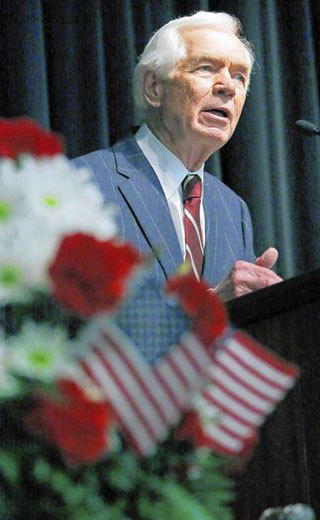 Sen. Thad Cochran (R-MS), facing a tough primary challenge from the tea party, recently told the Pearl, Miss., Chamber of Commerce that government “has played an important role in creating the environment that sustains economic growth and job creation.”

When Sen. Thad Cochran (R-MS) took the stage recently at a Chamber of Commerce brisket dinner, he not only defended his pork-barrel spending, he spoke about the goodness of government—something few Republicans have dared to do since the small-government tea party movement swept through their party. His campaign didn’t stop there. His supporters launched a TV ad mocking challenger Chris McDaniel, a telegenic state legislator half Cochran’s age. The spot highlighted an interview with McDaniel in which he said he was not sure he would have voted in favor of a multibillion-dollar federal disaster aid package that Cochran helped bring to Mississippi following Hurricane Katrina. “Seriously?” the ad said. “We just can’t count on him.” McDaniel quickly backtracked and said he would have supported the aid, even as he questioned how it was spent. As the midterm election approaches, other incumbent Republican senators are adopting similarly aggressive tactics for dealing with tea party challengers, mindful of colleagues who underestimated the threat in past elections and lost their seats, such as Richard G. Lugar in Indiana two years ago and Robert F. Bennett in Utah in 2010. Los Angeles Times, 4-5-14.