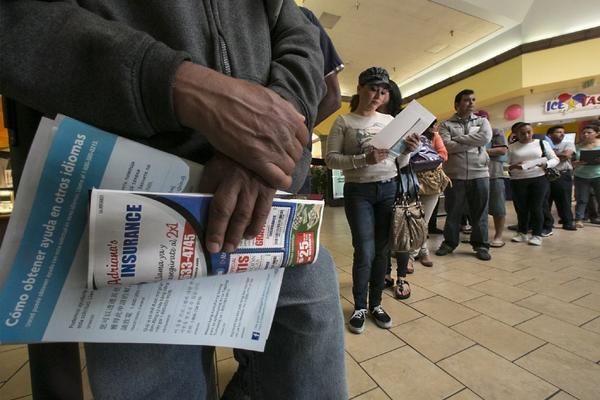 Customers line up in Panorama City CA over the weekend to sign up for Obamacare.

Against all odds and expectations, enrollments in health plans qualified under the Affordable Care Act surged Monday toward—and maybe beyond—the 7-million figure projected by the Congressional Budget Office before Oct. 1, when the open-enrollment period began. The deadline for starting enrollment applications for 2014 plans was midnight Monday. The surge is creating a big problem for the “train wreck” narrative of Republican opponents of the ACA, who have been holding out hope for Obamacare’s utter failure. So the excuse-making has begun. Recall that the budget office reduced its projection of enrollments on individual insurance exchanges to 6 million earlier this year to account for the botched launch of healthcare.gov, the federal enrollment website. Enrollments blew past that mark days ago. If exchange enrollments meet or exceed the original projection of 7 million despite the loss of some six weeks in website functionality in October and November, that would be a testament to the public’s latent desire for effective healthcare coverage. The apparent success of the first annual open enrollment period should show Republican naysayers that this law is here to stay, with all its customer-protection provisions intact. It’s time they recognized that the rhetoric about Obamacare’s failure has gotten them nowhere. It’s gotten the country nowhere. It’s time for them to get behind the law, to help get their fellow citizens the coverage they need, and to help fix what needs to be fixed. Michael Hiltzik, Los Angeles Times, 3-31-14.