This summer, Seattle City Attorney Pete Holmes pressed the Seattle City Council to approve a new citation for smoking marijuana in public. The fine should be $50, plus additional penalties that brought the charge to $103, he said. Holmes said he wanted the city to collect revenue—an admission that he seemingly wanted officers to hand out enough tickets to amount to a sizable chunk of new city income. But Council member Nick Licata introduced a bill yesterday that would halve the fine, and includes several provisions intended to stymie discriminatory or overzealous policing. Licata explains, “We wanted something that was, to be honest, more workable and acceptable to the public.” Holmes isn’t fighting the overhaul. “I don’t view this as a significant change and still support the ordinance,” he said. The Stranger, 12-3-13. 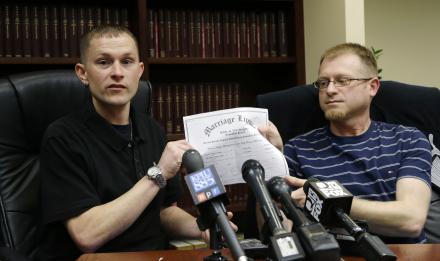 Michael and Eli Hall, right, hold their marriage license certificate, Tuesday, Dec. 3, 2013 as they talk to reporters in Seattle.

Two workers are suing BNSF, one of the nation’s largest rail companies, saying their same-sex spouses have repeatedly been denied health benefits even though gay marriage is legal in Washington state. The lawsuit filed Tuesday in U.S. District Court in Seattle states BNSF refused to add the spouses of locomotive engineer Michael Hall and conductor Amie Garrand to their plans. Hall, a train engineer, said trying to get the company to cover his spouse has been an emotional roller coaster. “I was told many times by BNSF [that] marriage is one man, one woman. I told them not in Washington state. They still said no,” Hall said. BNSF says the language in its contract with the Brotherhood of Locomotive Engineers doesn’t cover same-sex couples, as it refers to someone’s “husband or wife.” The union disputes that claim, saying it fully supports providing benefits for all married couples. KPLU, 12-3-13. 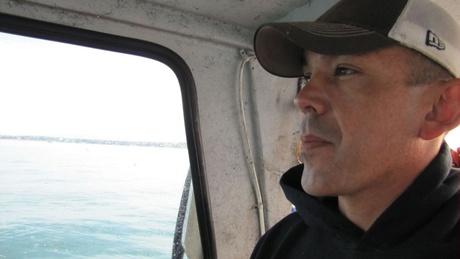 Jay Julius is a Lummi tribal council member and fisherman. He cites the Pacific International Terminals’ non-permitted actions at Cherry Point as a source of tribal opposition to the Gateway Pacific Terminal.

Three summers ago, the company that hopes to build the largest coal terminal in North America failed to obtain the permits it needed before bulldozing more than four miles of roads and clearing more than nine acres. It also led to the disturbance of a site from which 3,000-year-old human remains had been removed—and where archeologists and tribal members suspect more are buried. Federal and state laws required that the company also consult with the local Lummi and Nooksack tribes about the impacts of the work, which wasn’t done. Sidestepping the tribes meant avoiding delays for the project. Pacific International Terminals knew about the historic site and said it would avoid it, according to a memo the company submitted to the US Army Corps of Engineers four months before bulldozing at the site. Although the drilling occurred three years ago, the extent of it has been made public just recently, when EarthFix and KUOW obtained documents made public in federal court as part of a lawsuit by a local environmental group against the terminal company. KUOW, 12-3-13.

The most prominent group pushing to expand coal exports in Washington state has fired its spokeswoman and may be shifting its strategy in the aftermath of a hot mic incident. The spokeswoman, Lauri Hennessey, was secretly recorded at a coal conference this fall. Among other lighthearted comments, she called the Puget Sound “so weird” and said an executive once scolded her for telling a Seattle journalist that coal companies are concerned about climate change. Hennessey’s last day with the group, Alliance for Northwest Jobs and Exports, was Saturday. She is being replaced by Mariana Parks. The switch may signal a strategy change for the Alliance, which had been trying to establish a moderate reputation to appeal to the environmentally conscious Pacific Northwest. Hennessey has worked with local nonprofits, Democratic politicians, and the Environmental Protection Agency. She is one of several “green strategists” coal companies have hired to push their proposals. Parks has typically worked with business groups and conservatives, and served as a spokeswoman for Republican 2012 gubernatorial candidate Rob McKenna. Seattle Times, 12-3-13.

The former executive director of the Senate Democratic Campaign Committee (SDCC) was sentenced Tuesday afternoon to 25 1/2 months for embezzling up to $330,000 in campaign contributions to fuel his alcohol and gambling habits. Michael King was ordered to spend half of that time in prison, where he will be required to undergo treatment for alcohol and gambling addictions. The other half will be spent in community custody, the state’s version of parole. If he violates terms of his release he will be sent back to prison to serve out the rest of the sentence. King must also pay $250,000 in restitution. King, 32, pleaded guilty in October to four counts of first-degree theft and four counts of second-degree theft just one week after he was charged by the King County Prosecuting Attorney’s Office. Seattle Times, 12-3-13.

Contrite Puyallup School District officials told parents at a school board meeting Monday night that the district has stepped away from its experiment with hand scanners in school lunchrooms. The scanners shine near-infrared light to illuminate the unique vein patterns in an individual’s palm. The touch-free technology, which has been used in schools in other parts of the country, employs numeric encryption to link to students’ prepaid lunch money accounts in a separate database. But after the scanners were placed in Wildwood Elementary and Stahl Junior High—with plans to expand them districtwide—complaints from parents began rolling in. Some objected to what they viewed as an invasion of student privacy. Others were creeped out by the concept that schools would be collecting biometric data from children—even though school officials said the devices did not store a child’s “biometric footprint.” Still other parents said they were angry that they learned about the scanners not from the district, but from news media reports. “We failed at communication significantly on this,” said board president Chris Ihrig. “We got an ‘F’ on this one.” “We apologize,” said Superintendent Tim Yeomans. Tacoma News Tribune, 12-2-13.

Two House Republicans have a new bill that would spare the military from sequestration by cutting the Social Security benefits of many Americans who already experience painful federal budget cuts. Reps. Jim Bridenstine (R-OK) and Doug Lamborn (R-CO) introduced the Provide for the Common Defense Act Tuesday. The legislation would cancel out the next two years of sequestration cuts for the Pentagon by changing the way cost-of-living adjustments are calculated for Social Security, using a measurement called “chained CPI.” The result would be less money in the pockets of beneficiaries. It would also increase federal employee retirement contributions and means-test Medicare premiums. The plan is unlikely to go very far. Sen. Patty Murray (D-WA), one of the leaders of the House-Senate budget conference committee, has already ruled out cutting entitlement benefits, including instituting chained CPI, to spare the Department of Defense. Huffington Post, 12-3-13. 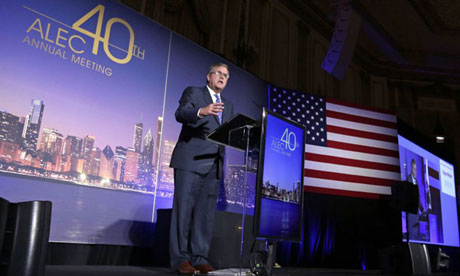 An influential lobbying network of Republican politicians and big businesses is seeking to avert a looming funding crisis by appealing to major donors that have abandoned it over the past two years following criticism of its policy on gun laws. The Guardian has learned that the American Legislative Exchange Council (Alec), which shapes and promotes legislation at state level across the US, has identified more than 40 lapsed corporate members it wants to attract back into the fold under a scheme referred to in its documents as the “Prodigal Son Project.” The target firms include commercial giants such as Amazon, Coca-Cola, General Electric, Kraft, McDonald’s, and Walmart, all of which cut ties with the group following the furor over the killing of the unarmed black teenager Trayvon Martin in Florida in February 2012. The Guardian has learned that by Alec’s own reckoning the network has lost almost 400 state legislators from its membership over the past two years. The Guardian, 12-3-13.

The Illinois General Assembly Tuesday narrowly approved a major overhaul of the state government worker pension system, following hours of debate on the controversial plan strongly opposed by employee unions. The House voted 62-53 to approve a measure that aims to wipe out a worst-in-the-nation $100 billion pension debt by reducing and skipping cost-of-living increases, requiring workers to retire later and creating a 401(k) option for a limited number of employees. The measure needed a minimum of 60 votes to pass the House. Moments earlier, the Senate voted for the measure 30-24. The bill needed at least 30 votes. The measure now goes to Democratic Gov. Pat Quinn, who has said he’ll sign it. A coalition of union groups blasted the vote and threatened legal action if Quinn signs it. They claim that the Illinois state Constitution prohibits pension cuts, and that the Illinois Supreme Court will overturn them. Chicago Tribune, 12-3-13. A Michigan woman is taking on the nation’s Catholic hospitals in federal court, alleging they are forcing pregnant women in crisis into having painful miscarriages rather than terminate the pregnancy—and not giving them any options. The Muskegon woman, who developed an infection and miscarried 18 weeks into her pregnancy, sued the U.S. Conference of Catholic Bishops Monday in conjunction with the ACLU, alleging the group’s anti-abortion directive denies proper medical care to women like herself. In her case, the lawsuit said, the directive contributed to a painful miscarriage and offered her no options. The case involves Tamesha Means, who was rushed to Mercy Health Partners in Muskegon in December 2010 when her water broke after 18 weeks of pregnancy. The hospital sent her home twice, even though she was in “excruciating pain;” there was virtually no chance that her pregnancy could survive, and continuing the pregnancy posed a significant risk to the mother’s health, she alleged in the lawsuit. Detroit Free Press, 12-2-13. 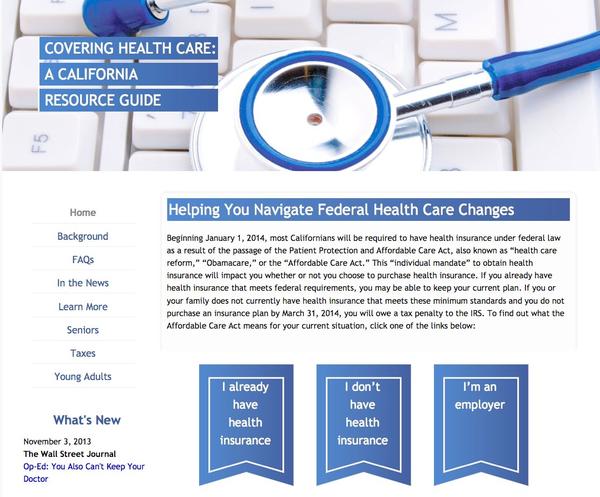 How to be of no value to constituents: The California GOP website.

Opponents of the Affordable Care Act never stop producing new tricks to undermine the reform’s effectiveness. But leave it to California Republicans to reach for the bottom. Their goal appears to be to discredit the act by highlighting its costs and penalties rather than its potential benefits. The device chosen by the Assembly’s GOP caucus is a website at the address coveringhealthcareca.com. If that sounds suspiciously like coveredca.com, which is the real website for the California insurance exchange, it may not be a coincidence. Bogus insurance websites have sprung up all over, aiming to steer consumers away from legitimate enrollment services. Constituents needing useful information about how to deal with the Affordable Care Act would be well advised to look elsewhere. As an aid to understanding and navigating the Affordable Care Act’s new requirements and opportunities for coverage, the GOP site is worse than useless. Finding a link there to the Covered California website, which after all is the main place residents can go to obtain insurance in the individual market, is a chore—there isn’t a link to it at all on the GOP page. Los Angeles Times, updated 12-3-13.