(Daily Clips will not publish Thursday, September 12, so that the editor can attend Wednesday night’s meeting of the 34th District Democrats. See you there.)

A look at impact on Seattle businesses and your pocketbook, one year into mandatory paid sick time

A year after all Seattle businesses were forced to offer paid sick time to all employees,  some said it’s working and others say it’s costing you. Tuesday, the Main Street Alliance of Washington released its report saying the law has not hindered the Seattle/King County economy.  The findings are all based on King County economic data. “The trends that were underway appear to have been continuing right along,” said Marilyn Watkins of the Alliance.  “The number of businesses in Seattle has continued to grow in services and retail and the volume of sales has continued to grow.” The Main Street Alliance and the Greater Seattle Chamber of Commerce agree that much more data is needed to fully understand the impact of mandatory paid sick time. KIRO, 9-10-13. 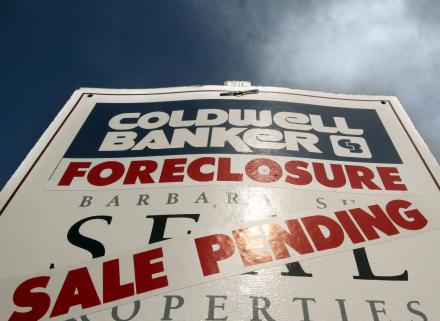 A Cornell University law professor recommends that Seattle consider using its power of eminent domain to stem the foreclosure crisis. But that idea is controversial,. The city of Richmond CA, which said it planned to try using eminent domain for that purpose, is now being challenged in court. Cornell’s Robert Hockett was hired by Seattle to study the extent of the foreclosure problem here and make recommendations. Hockett is advocating something unusual—that cities like Seattle use the power of eminent domain to take over underwater mortgages and make them affordable so the homeowners can stay put. A Seattle City Council committee will hold a hearing on Hockett’s findings and recommendations Wednesday afternoon. KPLU, 9-10-13.

Ken Sharp’s appearance at the Kent Neighborhood Council Candidate Forum demonstrated he’s remaining in his Kent City Council race. “I’m staying in the race,” Sharp said during an interview after the Monday night forum at the Kent Senior Center. Sharp decided to stay in the race despite first-degree theft charges filed by King County prosecutors against him for allegedly stealing money from his 93-year-old mother’s bank account. Sharp pleaded not guilty to the charges on Aug. 29 in King County Superior Court. The case won’t be resolved prior to the Nov. 5 general election. Neither Sharp nor his opponent Bailey Stober addressed the theft charges during the forum. Kent Reporter, 9-10-13.

Vashon teachers to get raises in new contract

The Vashon Island School Board is expected to approve the teachers’ contract Wednesday evening, providing the island’s public school teachers with an 8 percent raise over three years that administrators say will help Vashon remain competitive with nearby districts. By approving the contract, which covers the district’s roughly 100 teachers, librarians, and counselors, the board will commit the district to paying an additional $175,000 in salaries this school year and increasing to $465,000 by the third year, said Michael Soltman, the district’s superintendent. The raises are essential for the island to recruit and retain the best teachers, Soltman added. “Parents demand the best,” he said. “If we really mean it, we have to be competitive.” Vashon Beachcomber, 9-10-13.

The U.S. Department of Justice is working with federal regulators to allow banking services for pot merchants in Washington and Colorado, the two states that have legalized adult possession of small amounts of marijuana. Deputy Attorney General James Cole acknowledged the current dilemma, that without changes at the federal level, legal pot stores will operate on a cash-only basis because banks fear they’ll violate federal law by accepting pot money. That was the chief news to come out of what some considered a historic congressional hearing, the first to occur since the Department of Justice (DOJ) last month said it would not sue to stop Washington and Colorado from moving ahead with state-regulated legal marijuana. Seattle Times, 9-10-13.

Inslee: The data will drive us

Gov. Jay Inslee vowed in 2012 to follow successful business models in recasting state government, and Tuesday, he supplied the first small piece of his plan. It’s a program called Results Washington, designed to provide every manager in state government with “an unprecedented array of performance data related to (Inslee’s) top goals.” “Using the latest technology, agencies will regularly upload data for outcome measures and leading indicators:  Once the tool — called GovStat — is fully phased in, the updated data will be displayed on the Results Washington web portal,” promised the governor’s office. Seattle P-I, 9-10-13.

An International Longshore and Warehouse Union local 4 supporter holds a sign outside the main gate to United Grain as a vehicle enters May 1 in Vancouver.

A situation that had threatened to foul up the movement of grain at the Port of Vancouver has been resolved, for now, thanks to a closer working relationship between the Washington state Department of Agriculture and Vancouver police. Inspectors with the state Agriculture Department have returned to examining grain shipments at United Grain Corp.’s sprawling plant at the port, a spokesman for the Agriculture Department said Tuesday. Inspectors had recently been unable to reach United Grain because the department said that locked-out longshore workers picketing the entry point—a gate on the port’s east side—had increasingly made inspectors feel unsafe. The restoration of state grain inspections is the latest development in a yearlong contract dispute between Northwest grain-terminal operators and the International Longshore and Warehouse Union. The conflict has included lockouts at United Grain, which froze out 44 union workers in February, and at Columbia Grain in Portland. Vancouver Columbian, 9-10-13. 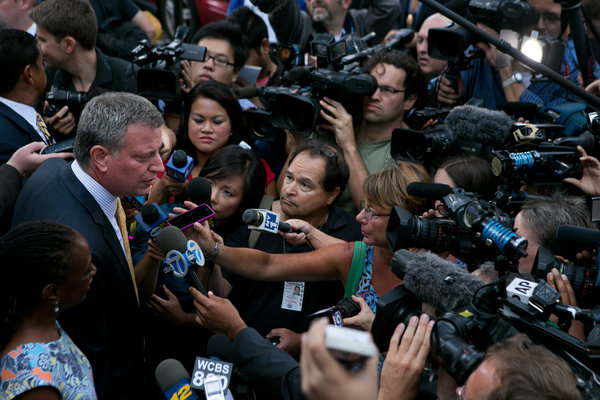 On the outside, Bill de Blasio’s improbable ascent in the Democratic mayor’s race, from afterthought to front-runner in just four weeks, looked meteoric and spontaneous. Behind the scenes, though, it required shrewd maneuvers and hardball politics that seemed incongruous with the candidate’s high-minded image. Underlying it all was a message of indignant liberalism, sketched out by de Blasio at a Manhattan restaurant in 2012, that was simple, sellable and penetrating enough to transcend class, gender and race. After 12 years of any mayor, de Blasio and his campaign team  reasoned, the electorate craved something fundamentally different in substance and style. New York Times, 9-10-13.

An epic national debate over gun rights in Colorado Tuesday saw two Democratic state senators ousted for their support for stricter laws, a “ready, aim, fired” message intended to stop other politicians for pushing for firearms restrictions. Senate President John Morse and Sen. Angela Giron will be replaced in office with Republican candidates who petitioned onto the recall ballot. Recall supporters contend Morse and Giron ignored their constituents and the constitution by advancing the gun laws. They accused the governor and the legislature of taking marching orders from the White House and New York Mayor Michael Bloomberg, who contributed $350,000 to fight the recalls. Vice President Joe Biden even called Democrats on the House floor on the day that chamber was debating the gun package. Denver Post, 9-10-13. 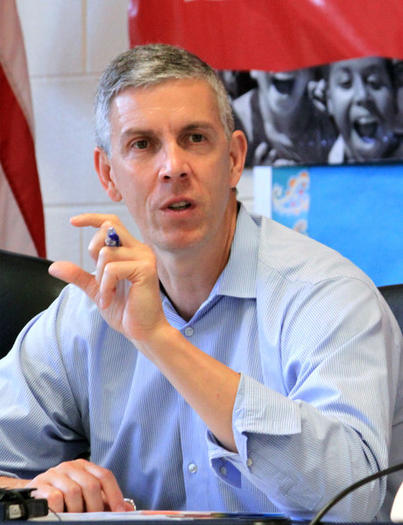 The nation’s top education official threatened Monday to withhold federal funds if California lawmakers approved pending legislation to revamp the state’s standardized testing system. U.S. Secretary of Education Arne Duncan issued the warning as AB 484 awaits a full vote of the Assembly and state Senate. The proposed law would end the standardized exams used since 1999 and replace them next spring with a computerized system. The purpose is to advance new learning goals, called the Common Core standards, that have been adopted by 45 states. Duncan declined to specify what action he would take, and in fact, the federal government has no direct authority over state school systems. But the department controls billions of dollars in federal funds, which can make up about 10% of a school district’s budget. This money adds up to about $600 million a year for Los Angeles Unified, according to the district. Los Angeles Times, 9-9-13.

How the cult of shareholder value wrecked American business

In the recent history of management ideas, few have had a more profound — or pernicious — effect than the one that says corporations should be run in a manner that “maximizes shareholder value.” Indeed, you could argue that much of what Americans perceive to be wrong with the economy these days — the slow growth and rising inequality; the recurring scandals; the wild swings from boom to bust; the inadequate investment in R&D, worker training and public goods — has its roots in this ideology. The funny thing is that this supposed imperative to “maximize” a company’s share price has no foundation in history or in law. Nor is there any empirical evidence that it makes the economy or the society better off. What began in the 1970s and ’80s as a useful corrective to self-satisfied managerial mediocrity has become a corrupting, self-interested dogma peddledby finance professors, money managers and over-compensated corporate executives. Steven Pearlstein, Washington Post, 9-6-13.