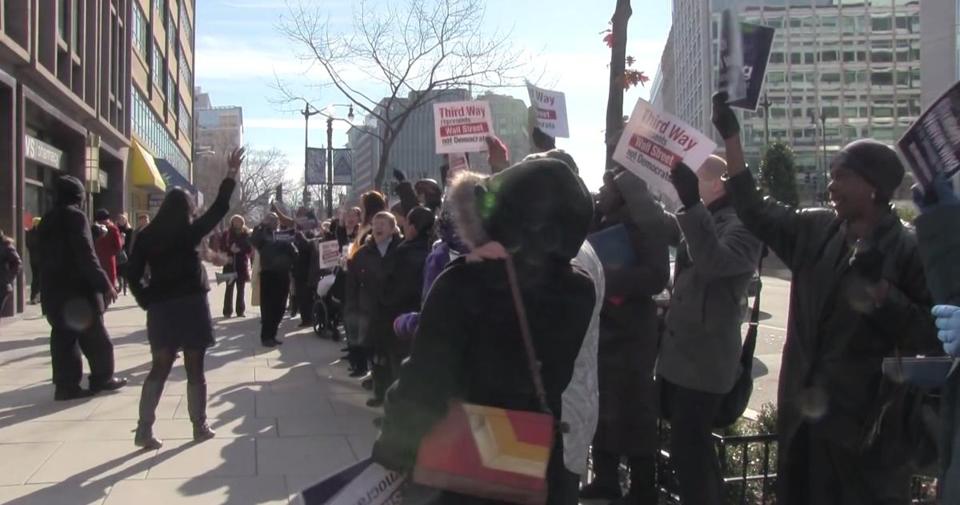 Protesters gathered outside Third Way’s offices in Washington, D.C., in December 2013, asking the group to reveal its funding sources.

On a summer afternoon amid the frenzy of the Democratic National Convention in Boston 10 years ago, a group of Washington business lobbyists, political operatives, and a smattering of senators gathered at one of the city’s downtown law firms to hear a plan. Members of the group worried that, with the end of the Bill Clinton era, the Democratic Party’s centrist wing had lost its way. Over sodas, they pitched a new think tank named for Clinton’s political philosophy, Third Way. Fast forward a decade: The philosophy, sketched out privately at the Boston office of Brown Rudnick, is now at the center of an intense struggle for the soul of the Democratic Party. Third Way, backed by Wall Street titans, corporate money, and congressional allies, is publicly warning against divisive “soak-the-rich” politics voiced by populist Democrats. Its target: Elizabeth Warren, the Massachusetts senator whose rise to power two years ago helped galvanize Democratic grass roots against Wall Street and pushed the issue of income inequality to the forefront. This is more than a grudge match. At stake for the Democratic Party is the support of middle-class swing voters who decide elections. Boston Globe, 10-6-14.