Steinbrueck knows how to build, but can he build a campaign?

Bestselling author Robert Fulghum delivered the warmup at Sunday’s Peter Steinbrueck-for-Mayor campaign kickoff, and described a candidate that Seattle voters could hire to do several jobs. “He is a fine carpenter — he has done work at my house,” said Fulghum.  “He is an architect — He designed a house for me in Moab, Utah.” Other skills will be tested in the next three months of Peter Steinbrueck’s life.  Is he still a politician, and does he have the coalition-building and message delivering ability to get past the August primary and possibly into the Mayor’s office? Steinbrueck could tap into an undeniable unease with city priorities.  But he doesn’t have long to do it, and has yet to get off process talk and deliver a sharp, attention-commanding message. Seattle P-I, 5-6-13.

King County Council member Rod Dembowski was appointed in February to a vacant seat, so now he’s defending his position in the fall election. And it looks like he might have an easier time than he expected. State Rep. Cindy Ryu (D-32), a popular Shoreline politician, was a finalist for the appointment and planned to run for the seat after the County Council selected Dembowski. Ryu said today she is undecided whether she’ll seek the council seat after all. She has not been raising any money, even during the break between the Legislature’s session and special session. “It probably puts me at a huge disadvantage,” she said, noting that she thinks it’s best to stay focused on the Legislature’s work. Meanwhile, King County Executive Dow Constantine is preparing to kick off his re-election campaign comfortably with $357,999 on hand as of the end of April, according to his consultant, Christian Sinderman. Seattle Times, 5-6-13. A King County Medic One ambulance

The King County Council Monday gave its unanimous support to the 2014-2019 Strategic Plan that will guide King County’s Medic One/Emergency Medical Services (EMS) system’s nationally recognized model for delivering pre-hospital emergency care. The integrated emergency medical services offered throughout King County earned this region an nternational reputation in excellence, and the distinction of being the “best place to survive a heart attack.” The County Council is currently reviewing the levy proposal that would fund these Medic One/EMS services through a voter-approved levy which is proposed to be placed on the November 5 general election ballot. Kirkland Reporter, 5-6-13.

Janet Sailer, from Sammamish Plateau Water and Sewer District, stands near one of the three district’s wells that draws half of the drinking water from the aquifer below where she is standing.

More than a decade and a half after construction began on the 7,000-resident Issaquah Highlands community, renewed conflict has erupted over how to handle the stormwater it generates. The state Department of Ecology is on track to allow treatment by filtering water through sand and gravel above an aquifer that provides drinking water to tens of thousands of area residents. Officials at Ecology and the city of Issaquah say the plan—envisioned for years— s a safe, proven way of replenishing the aquifer and removing potentially harmful bacteria. But the area’s largest water provider, the Sammamish Plateau Water and Sewer District, wants contaminants including fecal coliform removed before the water goes into the ground. Seattle Times, 5-6-13.

Don Benton arrives Monday at the Clark County Public Service Center for his first day as the director of Environmental Services on Monday.

State Sen. Don Benton (R-17) was all smiles as he walked into work Monday morning. Benton, who was appointed Wednesday by Commissioners David Madore and Tom Mielke to be Clark County’s director of environmental services, declined an interview before heading into the Public Service Center just before 11 a.m. for his first day on the job. Meanwhile, the controversy surrounding the hire continued to roil the political waters among the commissioners. Madore released a statement on his public Facebook page Saturday, asserting that County Administrator Bill Barron inadvertently fueled the dissatisfaction of some community members by not updating the job description for Benton’s new position. Not so, said Commissioner Steve Stuart in a Facebook response Monday afternoon. Stuart said no action was taken by the board to change the job description, so Barron would have no reason to update it. He castigated Madore for pushing the blame onto Barron. Vancouver Columbian, 5-6-13.

The state just got some good news about the improving post-recession financial outlook of Washington’s workers’ compensation system. And that’s bad news for Republicans’ special-session effort to revive legislation expanding the controversial lump-sum buyouts of injured workers. The news from Tuesday could be the final nail in the coffin of 2013 legislative efforts to cut injured workers’ benefits. The system’s Contingency Reserve funds increased 64 percent from $580 million in June 2012 to $953 million at the end of the year. That number is significantly higher than L&I’s previous projection that there would be $720 million in those funds at the end of the year. That’s important because legislators in the Republican-controlled State Senate have cited low reserve funds and the future rate increases that could be necessary to boost those reserves as the motivation for passing controversial bills that would expand lump-sum buyouts of injured workers and grant employers more control over injured workers’ medical treatment. The Stand, 5-6-13.

In its first legislative session, a new state gun-control group appears to have won the money battle but lost the legislation war. The Washington Alliance for Gun Responsibility, founded this winter to combat the influence of the gun-rights lobby, outspent the National Rifle Association $16,666 to $14,966 during a debate in the Legislature on whether to require background checks for more gun sales, according to recently filed disclosure documents. In January through March, the Alliance spent the $16,666 on payments to three contract lobbyists, according to the Public Disclosure Commission (PDC) documents. Its principal contributor and one of its founders is Nick Hanauer, a Seattle entrepreneur and venture capitalist. Seattle Times, 5-5-13.

Serving their nation, losing their jobs 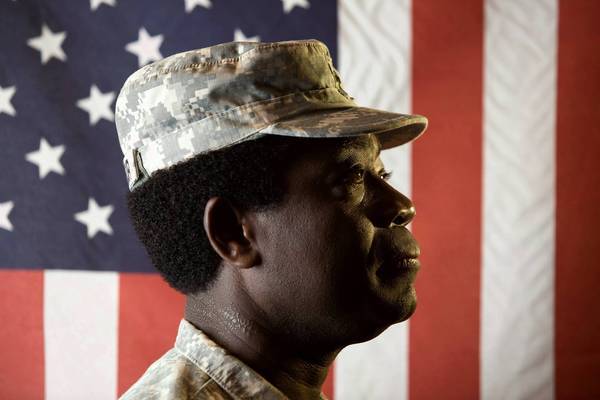 I felt betrayed,” said Pierre Saint-Fleur, a former Fresno County mental health worker who said he was forced into early retirement after three deployments to Iraq as a military chaplain in the California National Guard.

The jobs of the nation’s citizen soldiers are supposed to be safe while they are serving their country: Federal law does not allow employers to penalize service members because of their military duties. Yet every year, thousands of National Guard and Reserve troops coming home from Afghanistan and elsewhere find they have been replaced, demoted, denied benefits or seniority. Government agencies are among the most frequent offenders, accounting for about a third of the more than 15,000 complaints filed with federal authorities since the end of September 2001, records show. Los Angeles Times, 5-5-13. 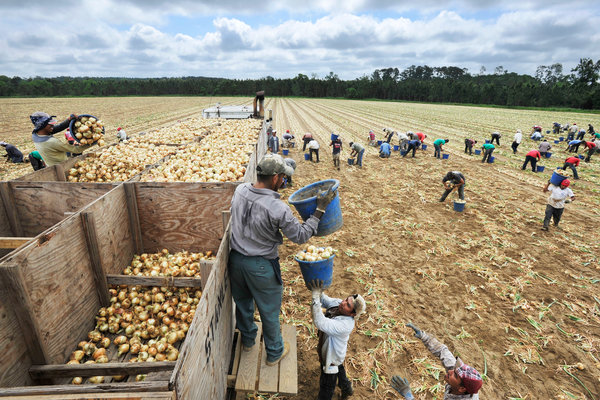 Working for hours on end under a punishing sun, the pickers are said to be crowded into squalid camps, driven without a break and even cheated of wages.

For years, labor unions and immigrant rights activists have accused large-scale farmers, like those harvesting sweet Vidalia onions in Georgia this month, of exploiting Mexican guest workers. Working for hours on end under a punishing sun, the pickers are said to be crowded into squalid camps, driven without a break and even cheated of wages. But as Congress weighs immigration  legislation expected to expand the guest worker program, another group is increasingly crying foul — Americans, mostly black, who live near the farms and say they want the field work but cannot get it because it is going to Mexicans. They contend that they are illegally discouraged from applying for work and treated shabbily by farmers who prefer the foreigners for their malleability. New York Times, 5-6-13. 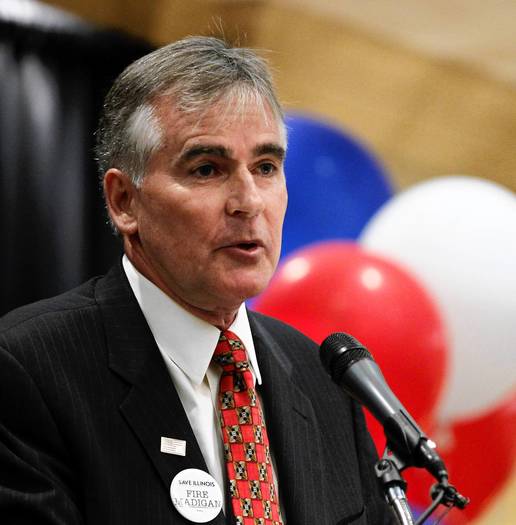 Pat Brady, chairman of the Illinois Republican Party, announced his resignation Tuesday amid a simmering controversy over his support for gay marriage legislation. Brady had been expected to quit following a tumultuous period that pitted the Republicans’ social moderates against their social conservatives. With same-sex marriage legislation pending in the Illinois legislature, Brady this year voiced his support for the proposal despite a plank in the state GOP platform that said marriage should be reserved for a man and a woman. Brady said he made the endorsement personally, not as Republican chairman, but conservatives in the top echelon of the GOP party quickly complained. After November 2012 losses that handed Democrats veto-proof majorities in the Illinois House and Senate, Brady had argued that Republicans needed to be more inclusive. Chicago Tribune, 5-7-13.

Former Senator Jim DeMint (R-S.C.), now leader of the Heritage Foundation, knows that the nonpartisan Congressional Budget Office (CBO) is likely to judge that immigration reform — including eventual citizenship for millions of undocumented immigrants — will be a shot in the arm for the U.S. economy. After all, the CBO has done so with previous such legislation. That explains why DeMint, a bitter opponent of legalization, has launched a preemptive attack on the CBO — “puppets of the Congress,”he called the office the other day — and why Heritage has issued a study slamming amnesty for unauthorized immigrants as a drain on taxpayers. The Heritage paper, chock-full of assumptions that most economists dispute, is a blatant attempt to twist the immigration debate. It concludes that newly legalized immigrants would cost $6.3 trillion more in benefits over their lifetime than they would pay in taxes. Washington Post, 5-6-13.