(Daily Clips will not publish Thursday May 9, so that the editor can attend the monthly meeting of the 34th District Democrats, Wednesday, 7 PM, Hall at Fauntleroy. See you there.)

Courting the Latino vote: How far is local GOP willing to go? 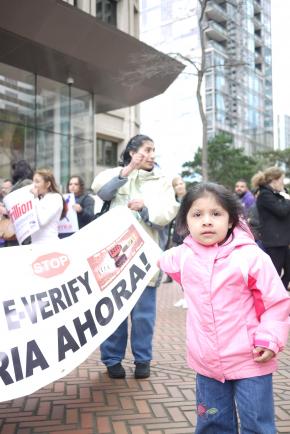 Harumy Rojas (in pink) attended an immigration rally with her mother and other families in downtown Seattle in March.

A few months ago, Seattle’s prominent immigrant advocacy organization OneAmerica asked itself a question, executive director Rich Stolz recalls: “How do we begin to engage more Republicans?” Just a year ago, nothing much might have come of the question. OneAmerica’s usual allies are on the left, whether they be Democratic politicians, labor groups or gay marriage advocates. Republicans, by and large, have been extremely wary of reform that offers anything approaching amnesty for the estimated 11 million immigrants living illegally in this country. .Then came the November 2012 election. Hispanics’ overwhelming rejection of Romney led to a national bout of GOP soul-searching. The Republican National Committee is calling for state parties to begin outreach efforts among Latinos and other minorities. Washington’s GOP state chair Kirby Wilbur says he is expecting to hear this month how much money and staff the national organization will provide for such outreach in this state. Seattle Weekly, 5-7-13.

Past gang membership, tattoos, and a record of driving while intoxicated will be evaluated on a case-by-case basis in screening applicants for the Seattle Police Department under new policies designed to boost diversity on the force and hire officers who reflect the makeup of the community. “We’re trying to do everything we can to smooth out those bumps in the road,” Assistant Police Chief Dick Reed said at a news conference Monday at the social-justice organization El Centro de la Raza as the city unveiled changes in minimum hiring standards. The city expects to hire more than 300 officers in the next five years to fill positions created by retirements, including 85 to be hired this year. A new round of testing is to be held July 13, with enrollment having opened on Monday. Seattle Times, 5-6-13.

Former Congressman Norm Dicks is joining the law firm of Van Ness Feldman LLP, which focuses on legal issues involving energy, the environment and natural resources. Dicks, who represented Washington state for 36 years in Congress, is joining the firm as senior policy council. He will represent clients on public policy and regulatory issues, particularly in the environmental sector. LaTasha Wortham, a long-time aide to Dicks, is also joining the firm. Van Ness Feldman has offices in Seattle and Washington, D.C. Last Spring, Dicks announced he would not seek an 18th term representing Washington’s 6th Congressional District, which covers the entire Olympic Peninsula and portions of Tacoma. Puget Sound Business Journal, 5-7-13. 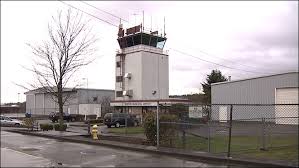 Though the federal budget sequester has led to delayed flights at major passenger airports, things are continuing as usual at Renton Municipal Field—for now. The airport is, however, among 149 smaller airports around the country that are facing a shutdown of their tower on June 15 without a move of Congress. But a pair of letters—one from each house—to FAA Chair Ray LaHood make it clear the legislators intend to keep those airports open. The City of Renton has also joined a lawsuit requesting a stay on the closures, which City Administrator Jay Covington said remains the city’s primary focus on the issue. “We continue to just prepare along with the other cities,” Covington said Monday. Renton Reporter, 5-7-13.

Don Benton arrives at the Clark County Public Service Center for his first day as the Director of Environmental Services, Monday.

State Sen. Don Benton’s (R-17) new gig as environmental services director for Clark County could triple his state-funded retirement benefit when compared to the benefit he’d receive from working only as a legislator. If Benton, 56, didn’t take the county job and instead remained a senator until the state’s ripe retirement age of 65, he would receive about $1,900 a month once he retires, or nearly $23,000 a year, according to estimates by the Columbian with assistance from county and state officials. That’s assuming his annual legislative pay stays at $42,106 between now and his retirement, though that salary could certainly increase during the next nine years. But Benton’s new county job, coupled with his legislative job, could increase his estimated retirement benefit to more than $5,800 a month, or nearly $70,000 a year. That’s a retirement increase of $47,000 annually. Vancouver Columbian, 5-7-13.

The Vancouver City Council declined Monday to place an anti-light rail initiative on the November ballot. It was the first time the council had discussed the petition since it had been certified. In April, a Cowlitz County Superior Court judge struck down a state law that initially had rendered invalid hundreds of signatures on a petition to get the initiative on the ballot. Vancouver City Attorney Ted Gathe reiterated that the initiative falls outside the scope of the city’s initiative powers and would not be legally defensible. Assistant City Attorney Linda Marousek ran through about 15 ways the initiative violates the city charter, state law, and legal precedent. The proposed ordinance, sponsored by Larry Patella, Debbie Peterson, Ralph Peabody, Charlie Stemper, Steve Herman and Don Yingling, would prohibit any city resources from being used to help extend TriMet’s MAX line from Portland to Vancouver as part of the Columbia River Crossing project. Vancouver Columbian, 5-6-13.

Pro-union protesters set up river picket at Port of Kalama

The 623-foot Mary H anchored across the Columbia River from the Kalama Export grain terminal at the Port of Kalama on Tuesday morning after protestors blocked its path to the port.

Nine boats carrying longshore union supporters blocked a grain ship at the Port of Kalama Tuesday morning, causing the Coast Guard to board one boat and cite the owner for violating a 200-yard safety zone. The incident is a spillover of a Vancouver dispute between the International Longshore and Warehouse Union and United Grain. Protesters were trying to impede a grain ship partially loaded with scabs in Vancouver and then headed to Kalama to load more grain. Union members called the substitute grain workers “strike breakers” brought in to work during a lockout of ILWU workers. “We’re not ever going to tolerate a scab boat, and it’s going to escalate” if any vessel serviced by non-union workers tries to dock at lower Columbia River ports, said Jake Whiteside, president of Local 21 of the ILWU. “I’m paying very close attention.” By early afternoon, the 623-foot, Liberia-based Mary H was at anchor on the Oregon side of the river and was listed as “delayed,” according to Port of Kalama officials. Longview Daily News, 5-7-13.

Delaware became the 11th state to legalize same-sex marriage after a lengthy debate in the state Senate. A half-hour after the 12-9 Senate vote, Gov. Jack Markell signed the legislation into law on the main stairs in the lobby of Legislative Hall.

Delaware became the 11th state to legalize same-sex marriage Tuesday after a lengthy debate in the state Senate and the surprise votes of two lawmakers who could have tipped the tally the other way. A half-hour after the 12-9 Senate vote, Gov. Jack Markell signed the legislation into law on the main stairs in the lobby of Legislative Hall. During the debate in the Senate, Democratic Sen. Karen Peterson said the opposition’s arguments are based on the notion that being gay or lesbian is a choice, but that she cannot remember when she chose to love another woman. Peterson came out publicly for the first time on the Senate floor, referencing her 24-year relationship with her partner. Wilmington News-Journal, 5-7-13.

The White House issued a veto threat Monday for a House comp-time bill that would allow private-sector employees to take comp time instead of overtime pay. “This legislation undermines the existing right to hard-earned overtime pay, on which many working families rely to make ends meet, while misrepresenting itself as a workplace flexibility measure that gives power to employees over their own schedules,” the White House Office of Management and Budget said in a statement. “If the President were presented with this legislation in its current form, his senior advisors would recommend that he veto the bill.” Politico, 5-6-13.

In anticipation of protests at ALEC’s recent meeting in Oklahoma City, state legislators were handed a set of talking points that read “The American Legislative Exchange Council recognizes the first amendment rights of free speech and assembly, and asks that _____ do the same,” apparently to prepare legislators for press questions about citizen activism. But ALEC didn’t live up to those spoon-fed talking points: ALEC assembled a dossier of disfavored reporters and activists, kicked reporters out of its conference who might write unfavorable stories, and managed to boot a community forum critical of ALEC from its reserved room. In what might be the biggest anti-ALEC rally yet, the ALEC legislators and lobbyists arriving at the Renaissance Hotel on May 2 were greeted by a wave of protesters that outnumbered the conference attendees. Yubanet.com, 5-6-13. 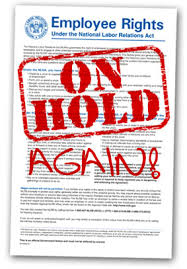 In another blow to labor unions, an appeals court Tuesday struck down a federal rule that would have required millions of businesses to put up posters informing workers of their right to form a union. The (conservative-dominated) U.S. Court of Appeals for the District of Columbia Circuit said the National Labor Relations Board violated employers’ free speech rights in in trying to force them to display the posters or face charges of committing an unfair labor practice. Unions had hoped the posters would help them boost falling membership, but business groups argued that they were too one-sided in favor of unionization. The court’s ruling is the latest success for business groups that have worked to prevent the NLRB from shifting the legal landscape in favor of labor unions, despite President Barack Obama’s appointment of several labor-friendly board members. Associated Press (Washington Post), 5-7-13.

Marijuana advocates late Monday fought back an effort that could have halted Colorado’s plans for legal marijuana shops, ending a debate that swept through the state Capitol like a dust devil for a little more than three hours. The proposal, Senate Concurrent Resolution 3, would have put two separate constitutional measures before the voters in November. The first would have asked voters to approve special sales and excise taxes on recreational marijuana. If that measure failed, a second measure would have asked voters whether they wanted to suspend recreational marijuana sales. Denver Post, 5-6-13.

What does a LNG pipeline mean for California?

The Obama administration will likely decide on an oil-company backed proposal that would allow unlimited exports of liquid natural gas (LNG) within a few weeks. Big Oil and others whose bottom lines stand to grow from the policy are seeking to muddy the issue. But it really is simple: the results of expanding exports of liquid natural gas (LNG) could have some dramatic impacts on our economy and environment. And with the California GOP possibly looking to use their pro-fracking stance as an electoral issue, these are very relevant questions. Studies have shown that exporting LNG could increase the price of gas domestically by 300 percent, savagely curtailing our ability to climb out of the recession and to build a competitive 21st century economy. Why is the DOE considering a policy, which would harm American citizens and American industry for the sake of increasing the overseas profits for a few giant oil and gas companies? Brian Leubitz, Calitics, 5-6-13.