Protesters place flowers and write the names of fire victims during a protest Wednesday at the Renton Walmart.

Approximately 100 protesters gathered Wednesday at the Renton Walmart to remember fire victims and demand that the company and others like it take better care of overseas workers. On hand for the protest were Kalpona Akter from the Bangladesh Center for Worker Solidarity, who tearfully called for Walmart and other companies to sign on for increased fire safety for workers in her home country and a survivor of a factory fire in that country. The protest was given an increased sense of urgency due to a fire and collapse the night before at a factory in Bangladesh that killed 87 and injured hundreds more. After a brief rally, members of Renton Firefighters Local 864 led a short march to the front of the store, where a wreath was laid in remembrance of those that have died. Protesters also wrote the names of victims in chalk and chanted for better working conditions. Renton Reporter, 4-24-13. Protesters fill the streets of downtown Seattle for a May Day march on Tuesday, May 1, 2012.

May, a month that celebrates flowers and mothers, also plants the seeds of dissent as protesters take to the streets May 1 for International Workers’ Day, a holiday recognized by labor movements, immigrants rights groups, and anti-capitalist activists. In Seattle, organizers of events celebrating International Workers’ Day are emphasizing immigration reform by advocating for immigration policies that support same-sex marriage and protesting aggressive deportation tactics. El Comité Pro Reforma Migratoria y Justicia Social is holding an immigrant rights rally and march. The May 1 march will begin in the Central District and end at the Henry M. Jackson Federal Building downtown. The rally will be at Judkins Park, 2150 S. Norman St. at 1:30 p.m. Participants will then march into downtown Seattle, first via Jackson Street, then continuing onto Fourth Avenue. The group will hold another rally with speakers at the Jackson Building at 4:30 p.m. Real Change, 4-24-13.

Owners of dog slain by police are awarded attorney fees

A federal judge has almost doubled the amount of money the city of Des Moines must pay to the owners of Rosie, the Newfoundland fatally shot by police in 2010, adding $50,000 in attorneys’ costs and fees to the $51,000 the city has already agreed to pay the dog’s owners. At a hearing earlier this month, U.S. District Judge James Robart dismissed the city’s efforts to limit the amount of money paid to the attorneys for Deirdre and Charles Wright, whose pet Newfoundland was shot four times by police after they used a Taser on the dog and chased it from its yard. The Wrights had sued the city and police officers Michael Graddon and Steve Wieland for killing the 115-pound dog, which had escaped from the Wrights’ backyard while they were out of town overnight Nov. 7, 2010. The dog was sitting in their driveway barking when neighbors called police, worried that she might run into the street and be hurt. The officers responded and decided to shoot the dog within minutes of arriving. They first used Tasers on the dog twice, and chased her four blocks into a stranger’s backyard, where Rosie fled into a blackberry bramble. Graddon shot the dog four times with an assault rifle as she stood there. Seattle Times, 4-24-13.

Oregon Gov. John Kitzhaber’s office says a proposed $3.4 billion Columbia River bridge will die if Washington state tries to remove light rail from the project. The Interstate 5 bridge between Vancouver and Portland has been in the works for years, and its fate appears to largely rest on whether Washington state agrees to put up $450 million as its share of the cost. Democrats support the move, but the GOP-controlled majority in the state Senate has said it will reject any bridge proposal containing light rail. Oregon state Sen. Lee Beyer, chairman of the Senate Business and Transportation Committee, agreed the bridge project would die if Washington opposed light rail or did not come up with its share of the money for the project this year. “Any change to the project kills the project,” said Beyer, a Democrat from Springfield. “There isn’t the political energy to go forward and fight the battle again. We have other things we have to worry about.” Seattle Times, 4-13-13.

(some) Leaders of  the state’s Latino community, fed up with what they say is disinterest from state government, say they are forming a new organization to promote Hispanic-community interests. And they say Democrats and Republicans might want to take notice – for once. Organizers of the new Washington Latino Roundtable, Mike Sotelo, president of the King County Hispanic Chamber of Commerce, and Estela Ortega, executive director of El Centro de la Raza,  find fault with both sides. Naturally the Hispanic leaders are peeved about the death of the Dream Act last week, as well as the failure of a state-level Voting Rights Act. Both measures hit a brick wall in the Republican-leaning Senate and Democrats are playing the defeat for what it is worth. But the group’s leaders say they are equally disturbed by a dearth of Hispanic appointments in the administration of Democratic Gov. Jay Inslee. (as if the two issues were in any way equivalent. Don’t be fooled; this group is strictly Astroturf.). Washington State Wire, 4-23-13. 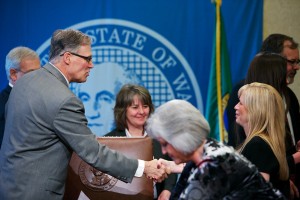 Governor Jay Inslee signed HB 1647 into law on Tuesday, which will require landlords to safely secure spare and master keys to rental units. Representative Gael Tarleton (D-36) introduced the measure after hearing Dana Widrig’s story. Widrig was brutally beaten and raped in her apartment complex three years ago. Her attacker was a maintenance employee who worked at Widrig’s apartment complex. He gained access to a spare set of keys to her rental unit because they weren’t properly secured by the landlord. Under current law, there is no legal requirement for a landlord to safely secure spare or master keys to rental units. HB 1647 looks to fix that oversight in the Landlord-Tenant Act by requiring landlords to safely secure spare keys to their rental units. House Democrats’ Blog, 4-14-13.

Washington House Democrats have trimmed their education improvements budget from almost $1.34 billion to $1.16 billion. That is in contrast the Republican-oriented Senate’s $1 billion education fix-it proposal going into budget talks to begin later this week. House Democrats got rid of their plan to extend the soon-to-expire beer tax and the proposed repeals of three tax exemptions as part of political maneuvering in trying to get most of their budget proposals through the Senate and Gov Jay Inslee. House Democrats also eliminated the proposed repeals of three business-and-occupation tax exemptions on stevedoring, insurance agents and janitorial service — together worth roughly $110 million in 2013-2015. Legislative update from Crosscut, 4-23-13.

Lawmakers slow down on DUI proposal

Lawmakers are tapping the brakes on a proposal to overhaul the state’s drunken-driving laws. HB 2030, a priority for Gov. Jay Inslee and lawmakers in both parties, had appeared on a fast track for approval before the regular legislative session ends Sunday. But with a special session looking likely, supporters said Wednesday they plan to take the extra time as well as focus on a narrower set of proposals. “We’re trying to change the law, and we have to be very deliberate,” said state Rep. Roger Goodman (D-45), who chairs the House Public Safety Committee. “This is complicated stuff.” Senate Law & Justice Committee Chairman Mike Padden (R-4) said the bill is alive and will be considered during the special session, assuming lawmakers don’t wrap up their work by Sunday. Seattle Times, 4-24-13.

Amid the debate over economy-stifling job-killing government austerity, one myth continues to ring loudly among the American public: that despite all the budget cuts, government is still growing. Not only right-wing politicians and their think tanks perpetuate this myth, it’s also the business lobbying groups. Yes, the same folks who bemoan the state’s freight mobility problems and its lack of skilled and educated workers—among other things—also regularly deliver the conservative clarion call against “big government.” But it’s a lie. Your government, at both the state and federal levels, is shrinking at an unprecedented rate. WSLC legislative update, 4-24-13.

Deported while unconscious: American hospitals quietly remove hundreds of undocumented patients from US

Jacinto Cruz, 49, leaves home in a wheelchair with the help of his wife, Belen Hernandez, in Veracruz, Mexico. Cruz and a friend suffered serious injuries during a car accident in May 2008 in Iowa.

Days after they were badly hurt in a car accident, Jacinto Cruz and Jose Rodriguez-Saldana lay unconscious in an Iowa hospital while the American health care system weighed what to do with the two immigrants from Mexico. The men had health insurance from jobs at one of the nation’s largest pork producers. But neither had legal permission to live in the U.S., nor was it clear whether their insurance would pay for the long-term rehabilitation they needed. So Iowa Methodist Medical Center in Des Moines took matters into its own hands: After consulting with the patients’ families, it quietly loaded the two comatose men onto a private jet that flew them back to Mexico, effectively deporting them without consulting any court or federal agency. When the men awoke, they were more than 1,800 miles away in a hospital in Veracruz, on the Mexican Gulf Coast. Hundreds of immigrants who are in the U.S. illegally have taken similar journeys through a little-known removal system run not by the federal government trying to enforce laws but by hospitals seeking to curb high costs. In interviews with immigrants, their families, attorneys and advocates, Associated Press reviewed the obscure process known formally as “medical repatriation,” which allows hospitals to put patients on chartered international flights, often while they are still unconscious. Associated Press (Talking Points Memo), 4-23-13.

Workers from fast food and retail chains walk of their jobs to protest along State St. for higher wages, Wednesday, April 24, 2013

Hundreds of fast-food and retail workers walked off their jobs Wednesday morning as part of a one-day strike, protesting for higher wages and the right to unionize. Starting at Union Station early Wednesday, about 50 protesters from the Workers Organizing Committee of Chicago joined other labor and community organizations outside downtown fast-food and retail outlets. Picketed businesses include McDonald’s, Subway, Macy’s, Sears, Nordstrom Rack and Victoria’s Secret. Shani Smith, of WOCC  said most retail and fast-food workers earn Illinois’ minimum wage of $8.25 or “just a few cents above it.” Inside Macy’s State Street flagship, shopper Rena Richmond was unaware of the chanting crowd outside Wednesday morning. Still, she expressed her support for the strikers. “As prices go up, I think the wages should too. …” Richmond, 57, said. “Macy’s has been around a long time. They should be doing better financially to be paying their workers better.” Chicago Sun-Times, 4-24-13.

Republicans appear to have persuaded large swaths of the party’s base that the campaigns to cut spending and to repeal Obamacare are moral crusades so urgent that the zeal behind them must never be permitted to weaken even slightly. This has created intertwined delusions — you can keep cutting spending forever with no consequences; one of these days Obamacare will face its grand reckoning — that have restricted the GOP’s maneuvering room on several fronts which are in the news today. Greg Sargent, Washington Post, 4-25-13, with a whole lot of links to other good stuff.