In a 24-page report titled “Aiding & Abetting: How Unaccountable Fair Trade Certifiers Are Destroying Workers’ Rights”, the International Labor Rights Forum (ILRF) details a 2010 chain of events in which it claims Seattle’s Theo Chocolate violated U.S. and international labor standards during a Teamsters Local 117 organizing campaign – allegations Theo strongly denies. The ILRF report specifically targets the methods and practices used by the Institute for Market Ecology (IMF) in awarding Theo the organization’s “Fair for Life” fair trade distinction. ILRF cites Theo’s alleged union-busting techniques to question the validity of such certifications – as the name of the report implies. Seattle Weekly, 2-13-13. The Seattle City Council committee that first approved receiving a federal grant for the surveillance cameras that are going up in West Seattle and elsewhere will take another look at it next week. That’s what Council member Bruce Harrell, chair of the Public Safety, Technology, and Civil Rights Committee (and a candidate for mayor), told WSB late today. The 30-camera network is planned to stretch from Golden Gardens in Ballard southward to the camera in the photo, next to the Fauntleroy ferry dock. West Seattle Blog, 2-14-13.

Op-ed: Port of Seattle: The gang that can’t shoot straight

Commissioner Rob Holland’s sudden resignation caps a year of pratfalls at the Port. The selection process is flawed, even as the stakes get higher at this key institution. So says Crosscut editor-in-chief David Brewster, the godfather of Seattle old-money elitism, with barely disguised contempt for the electoral process. Brewster would prefer that the Governor appoint “high-profile civic leaders” (he uses that term several times; it’s code for people like himself) who presumably would not do anything so . . . unseemly . . . as becoming pregnant. Crosscut, 2-14-13. Pacific residents came to Monday’s City Council meeting expecting to give the council and Mayor Cy Sun an earful about low staffing levels in the police department. But before people could vent their anger at Sun for his refusal to hire more police officers, he walked out, upset by the council’s decision to strike two ordinances and an appointment to the city’s civil service commission that he had put on the agenda. Citing Sun’s negligence in clearing the items with it first, the council removed them. Exit Sun, to catcalls from the audience. Auburn Reporter, 2-14-13.

“County Confidential,” “Thomas & French” and “Clowns at Midnight” — Tumblr sites with political content and literary allusions — can be traced to members of Aaron Reardon’s staff.

He crusaded on behalf of Snohomish County Executive Aaron Reardon for more than a year. He built a digital maze, a series of blind alleys that guarded his various identities. And for a literary touch, he borrowed names from fiction: a classic French novel, a Spanish mystery series and an Australian horror story. Inadvertently, however, he left gaps in his strategy. He’d sent the Washington State Patrol emails that demonstrated an interest in the early stages of the Reardon investigation. Those messages came from a particular electronic address with a distinct name. That name can be traced to a company, a real one that is registered with the state. And state records say the company belongs to Reardon aide Kevin Hulten and a co-worker, Jon Rudicil. Everett Herald, 2-14-13. (This story should contend for a Pulitzer Prize in investigative reporting.)

Gov. Jay Inslee laid out a $122 million jobs plan Wednesday, outlining several pieces of his 2012 campaign’s “75-point jobs plan” meant to spur job creation in the Evergreen State. The proposals are heavy on tax breaks, streamlining permitting for businesses, and major capital investments in clean energy, including a research center for biofuels at Washington State University. He also is pitching a slew of small-size education programs meant to train more skilled workers needed by the aerospace industry, part of a plan to “align” education with the needs of new or growing industries. Olympian, 2-14-13.

A contentious state House hearing on whether to require background checks for all gun purchases drew police officers, shooting victims, religious leaders, gun owners and Second Amendment activists to the Capitol Wednesday. HB 1588, proposed mostly by Democrats, would require background checks for all firearm purchases. Currently, licensed dealers are required to do the checks, but private sellers are not. In the contentious two-hour hearing, a couple dozen gun owners and Second Amendment activists described the bill as ineffective, unnecessary and unfair. Seattle Times, 2-13-13.

A bill that would gut the power of the state Gambling Commission and place most gaming decisions before the Legislature seems to demonstrate the growing ability of Indian tribes to win friends and influence people. Sponsors of HB 1295 say they just want to make sure the Legislature can stop the expansion of gambling, by stripping the state Gambling Commission of its authority to approve new games, raise betting limits and make other rules regarding non-Indian gambling. Yet by clamping down on a small and shrinking segment of the gambling biz — the state’s cardrooms, pulltab sellers, and charitable operators — the bill certainly seems to give an advantage to the Indian casinos that already have captured 79 percent of Washington state’s gambling revenue. The bill doesn’t affect the tribes. Washington State Wire, 2-14-13. (Washington State Wire’s Erik Smith and many of his fellow conservatives agree that Native Americans should not have any political power. Unfortunately for them, this bill enjoys wide bipartisan support.)

Schools at bottom of class for open government

Sunshine Review released its annual government transparency report, and Washington scored well. In general, states do a better job than counties and cities, which do a better job than school districts, at being open about their business. Scores were based in part on whether a government posted its budget, its meeting schedule and agendas, contracts with private individuals/firms, and contact information for *all* officials. In my experience, school district websites are in fact the worst. In 10 years of reporting, I don’t think I’ve ever seen a district post its budget online. Some districts, especially the small ones, don’t post (or make it very hard to find) something as basic as the phone number for individual schools (never mind phone numbers and emails for teachers). School levies make up a significant chunk of our property taxes; I haven’t seen districts post how those levy dollars are being used (except maybe during levy election season). Ralph Schwartz, Bellingham Herald, 2-12-13.

Tuesday night, the three major political parties all seemed to agree: it’s time for comprehensive immigration reform. President Obama said so in his State of the Union address. Senator Marco Rubio (R-FL) said so in his tortured Republican response. Even Senator Rand Paul (R-KY) said so in the Tea Party’s two cents’ worth. Then, on Wednesday, Janet Napolitano, the Secretary of Homeland Security, appeared before the Senate Judiciary Committee, making the case for reform legislation now. She got an earful from Jeff Sessions (R-AL), and John Cornyn (R-TX). Apparently these senators had not received the immigration unanimity memo. But the stars have been lining up strikingly for comprehensive reform for months. New Yorker, 2-14-13.

The man and the thinking behind the minimum wage hike 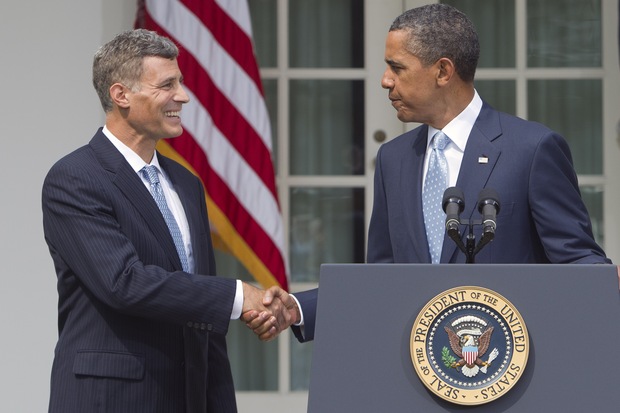 Alan Krueger shakes hands with President Barack Obama after announcing his nomination in August 2011 as chairman of White House Council of Economic Advisers.

President Obama is pushing a controversial hike in the minimum wage. It is surely no coincidence that his chief economic advisor is Alan Krueger, an economist who became famous in the 1990s for research supporting minimum wage hikes. But don’t higher wages mean fewer jobs? Krueger explains at length why they don’t. PBS Newshour, 2-14-13.

President Barack Obama comes to Chicago today. Welcome to Bizarro World, Mr. President. His stop was originally planned as part of a three-day post State of the Union tour to speak about the economy. The national scandal that the level of violence in his hometown has become has changed those plans somewhat. Fred Klonsky Blog, 2-15-13.

Desmond Meade stood with his wife on the National Mall on Inauguration Day, listening to a speech delivered by a president he did not vote for. But he followed attentively, hoping to hear just a few words that might address a man like himself: African-American, one-time homeless, recovered from substance abuse, and formerly incarcerated. His felony status kept him from voting for Obama, because as a Florida citizen he is not eligible to vote at all. He would leave D.C. disappointed, not only because he heard nothing about felony disenfranchisement, but he also heard nothing from Obama about the unique problems that affect black men. Since Obama didn’t, Meade is saying something, organizing in Florida on behalf of the 1.5 million people in the state who can’t vote due to felony convictions. Brentin Mock, The Nation, reprinted in Truth-Out, 2-14-13.