Port of Seattle commissioners voted Tuesday to raise their pay by $36,000 a year, becoming the only salaried port commission on the West Coast. No one commented before or after the vote by only three commissioners, one of whom is stepping down Friday. Instead of $500 a month, commissioners elected this November or later will be eligible for $3,500 a month. They also can collect $12,500 a year in per diem, as they do now. Commission President Tom Albro proposed the increase as a way to attract more people to the five-member body and make it feasible for people who have to work for a living to serve. Seattle Times, 3-12-13.

When Seattle Public Schools superintendent José Banda last Friday ordered the temporarily suspended race and gender curricula at the Center School to be reinstated, he offered four specific recommendations that were to be implemented “as soon as possible.” The first was to stop using a part of the curriculum called “Courageous Conversations,” which had been adapted by the teacher of the class, Jon Greenberg, from a staff training. At the Seattle Education Association’s representative assembly meeting Monday  night, they voted “overwhelmingly,” according to union president Jonathan Knapp, to encourage the district to remove that particular restriction. “Academic freedom is an important consideration,” says Knapp, and teachers need to be allowed to “make professional judgments about what they should be teaching.” The Stranger, 3-12-13.

Like many a mayoral candidate (and mayor) before him,  Seattle City Council member Tim Burgess Tuesday said he’d do a better job at fixing potholes and addressing the road-maintenance backlog in the city if elected mayor. Standing near an intersection on Capitol Hill, Burgess pointed to a patched stretch of pavement on East Pike Street and then to an unpatched crater on Boylston Avenue, about 10 yards  away, and questioned why city repair crews hadn’t fixed both. Burgess said he’d change the strategy for fixing streets from what he called a “worst first” approach to one that would divide the city into grids and direct the Seattle Department of Transportation to repair streets in a more systematic and proactive way. Seattle Times, 3-12-13.

Kent allows the Great American Casino to operate in Panther Lake under a grandfather clause from when the city annexed the area. City officials are looking at whether to allow casinos throughout the city to boost tax revenue.

Kent City Councilman Les Thomas decided to throw his cards on the table to see whether fellow council members and residents want to remove the city’s ban on casinos as a way to boost tax revenue. The Great American Casino operates in the Panther Lake area under an ordinance with a grandfather clause that allowed the business to stay open after Kent annexed the area in 2010. That ordinance maintained the ban on casinos in other parts of the city. Now city leaders are looking at whether to open up all of the city, except residential areas, to casinos. “The city of Kent is losing a tremendous opportunity to increase revenue to the city without having to raise taxes,” Thomas said at a March 5 council workshop. “Gaming revenue is going to other cities from Kent residents who go elsewhere to enjoy gaming. Why not in Kent?” Kent Reporter, 3-12-13.

Socialist on the Ballot: Kshama Sawant is running against Council member Richard Conlin

Kshama Sawant—a university instructor who holds a PhD in economics—says she will run for Seattle City Council against four-term fixture Richard Conlin. She says that Conlin exemplifies the council’s cozy relations with business lobbies, while he has personally voted against helping workers and the impoverished. “As a council member, I will use every inch of space as I am using it now—which is as an activist who is advocating on issues that affect the working class,” Sawant explained. The Stranger, 3-13-13.

When state Sen. Janea Holmquist Newbry (R-13) left the Senate floor Tuesday to nurse her newborn son, Senate Democrats didn’t miss a beat. Immediately they moved to take over the chamber. While minority Democrats say an important political point was at stake, outraged members of the Republican-leaning Majority Coalition Caucus say a greater principle of basic human decency is involved. Senators say they are incredulous that the Senate Democratic Caucus would take advantage of a situation created when a mother left to breastfeed her child. (But they aren’t outraged when they oppose raises in the minimum wage for working mothers, or family medical leave laws, so that working mothers can care for their sick children, oh, no.) Washington State Wire, 3-13-13.

The other side of the ‘outrage’: We’re all for bipartisanship, except when it’s not our idea

Tuesday, members of the Republican-dominated majority caucus voted to block a bill sponsored by Sen. Nathan Schlicher (D-26) from coming to the floor for debate and a vote. SB 5592 would have sought to keep toll increases and operating costs on the Tacoma Narrows Bridge in check by limiting the amount of toll revenues spent on administration and oversight. This bill would have helped residents and commuters to the Kitsap Peninsula who have long shouldered the rising costs of bridge tolls. Senate Democrats forced Republicans to show their hand and take a vote to bring the bill to the floor. As a result of this attempt, all 25 members of the Republican-dominated Majority Coalition Caucus voted against bringing the bill to the floor, including all members of the Senate Transportation Committee who had voted to support the bill before flip-flopping today and voting against it. Sen. Jeannie Darneille (D-27),  Senate Democrats Blog, 3-12-13.

When Washington voters legalized marijuana last November, they also set up strict buffers between pot shops and places where children tend to go – buffers that one state lawmaker says could squash the nascent industry. Chris Hurst (D-31), a former police detective from Enumclaw, might be the most conservative Democrat in the House. But he worries Washington “will not see a recreational marijuana market” this year if the rule stands keeping stores 1,000 feet from schools, parks, libraries, recreation centers, day-care centers and bus stations, putting large swaths of some cities off limits. Hurst’s HB 2000 would scale the buffer back to 500 feet, similar to what is required for liquor stores. Separately, his plan would tap the marijuana industry for an extra $50 million, he estimates, by paving the way for higher permits and fines. Olympian, 3-13-13.

The founders of Organizing for Action, the nonprofit group formed from President Obama’s reelection campaign organization, kicked off a two-day summit Wednesday by saying they will work to pass the president’s policy agenda but not to elect political candidates. OFA has come under criticism in recent weeks because it is being funded with unlimited donations from wealthy individuals and because the biggest donors will have access to the president. But OFA’s Jim Messina says the group should be celebrated because it aims to mobilize grass-roots supporters to fight the status quo in Washington and help pass Obama’s domestic agenda, including overhauls of the nation’s immigration and gun laws. (Sounds like they don’t think the Democratic Party matters any more.) Washington Post, 3-13-13. 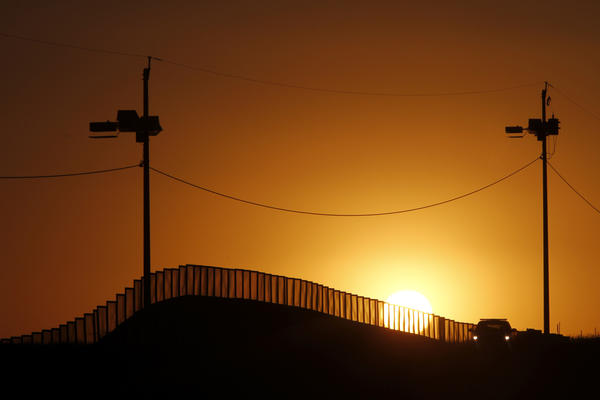 A U.S. border patrol vehicle is parked at the U.S.-Mexico border fence near Naco, AZ.

Immigrant rights groups filed legal actions Tuesday alleging abuse and racial profiling by Customs and Border Protection officers in five states. Three lawsuits alleging illegal treatment were filed in federal court in Washington, Texas and New York. Six separate legal complaints were also filed with CBP in those states, and in Ohio and Florida, seeking cash damages for immigrants who described harsh and sometimes violent conditions in confinement. In affidavits and complaints, U.S. citizens and immigrants describe Customs officers putting detainees in cold, cramped conditions for several days with little food and water. They alleged that the conditions were used to try to compel the immigrants to sign voluntary deportation orders. The cases also describe U.S. citizens being singled out for questioning by agents, apparently based on their race. Los Angeles Times, 3-13-13. Republican presidential candidate Mitt Romney was dogged by his videotaped remarks about 47 percent of Americans. Bill Clinton, it turns out, had a connection to that video.

Bill Clinton won the presidential election for Barack Obama. But it wasn’t his masterful Democratic National Convention speech or the advice he offered the president’s reelection campaign. Clinton, it turns out, inspired the man who filmed Mitt Romney’s infamous and game-changing 47 percent comments. Scott Prouty, who tended bar for a company that catered to a high-end clientele, had previously worked at a fundraiser at a home where Clinton spoke. After Clinton addressed guests, Prouty recalled, the former president came back to the kitchen and thanked the staff. He shook hands, took photos, signed autographs, and praised the meal. When Prouty learned he would be working at Romney’s fundraiser, his first thought was to bring his camera, in case he had a chance to get a photo with the presidential candidate. He got more than he bargained for. Huffington Post, 3-13-13. Prouty goes into detail about how he got his film the recognition that made it a factor in the election. Huffington Post, 3-13-13.

Those with a mind for controversy or whimsy may recall the outrage last year over a certain talking pineapple on the New York State eighth-grade reading exam. The pineapple passage was sliced, diced, and served up as an example of all that is wrong with standardized testing. The current obsession with testing (and pineapples) belongs to the standards movement, which began in the 1980s. Now, one of its battles is being fought in Seattle, where, in December, teachers at Garfield High School voted to boycott the Northwest Evaluation Association’s Measures of Academic Progress (MAP) exam. When students are forced to take an exam like the MAP two or three times a year so that they can be better prepared for other, more important exams, the assessment is no longer a partner to curriculum. The assessment has become the curriculum. New Yorker, 3-12-13.