A federal judge Tuesday approved a first-year blueprint for reforming the Seattle Police Department, praising the work creating the plan but issuing a blunt warning to the city that he has not been happy with political infighting that cluttered the negotiations. In a stern lecture from the bench, U.S. District Judge James Robart chastised the city for a “breakdown” in concentration during recent weeks, while Mayor Mike McGinn attacked City Attorney Pete Holmes’ ethics and questioned Holmes’ authority in the case. Holmes sat at counsel table during Tuesday’s hearing. McGinn did not attend. The plan approved by Robart lays out deadlines for implementing new policies and training in the Police Department, required under a settlement agreement between the city and the U.S. Department of Justice (DOJ). Seattle Times, 3-12-13.

Back to the bargaining table at Space Needle

After months of inactivity, management at the Space Needle has agreed to come back to the negotiation table with their workers’ union, UNITE HERE Local 8, through federal mediation on March 28. The union previously reported that the company had ramped up its anti-union campaign over the last two years when they fired and suspended union activists, denied overtime pay to its workers, created dangerous workloads for its kitchen staff, and racked up several Unfair Labor Practice charges pending with the National Labor Relations Board. The Stand, 3-12-13.

Op-ed: Get clean water to children of Seattle’s struggling families

I am proposing legislation that will modify the Seattle Municipal Code to make qualifying households eligible for a second emergency credit if they can demonstrate that a child under the age of 18 is in the home. Given Seattle Public Utilities’ bimonthly billing cycle and time frame for issuing shut-off notices, this change would, in practice, allow low-income households with minor children to avoid water shut-offs. Using 2012 as an example, a second chance for the 68 households with children would have cost an estimated $23,000. This is a small subsidy in the context of SPU’s almost billion-dollar annual budget. I anticipate voting this legislation out of the committee April 2. Seattle City Council member Jean Godden, Seattle Times, 3-11-13.

A contentious proposal to expand background checks on Washington state gun sales failed Tuesday in the state House, where supporters said they were just a handful of votes short. In a final effort to pick up a few extra votes, Rep. Jamie Pedersen (D-43) had proposed a referendum clause for HB 1588 that would have allowed the public to vote on the measure. He initially believed that would draw enough support to corral the 50 votes needed to pass the bill, but conceded Tuesday night that others had dropped their backing because of that shift. “It was too big of a stretch for this year,” Pedersen said. Associated Press, 3-12-13.

The federal government should stop enforcing the Controlled Substances Act, with its draconian definition of marijuana, in Washington and Colorado, which voted last November to legalize and tax the growing and sale of cannabis, House Democratic Leader Nancy Pelosi told interviewers Monday. “The state (Colorado) has spoken: The law has been passed. There are issues with taxation and regulation, and we should get on with it,” Pelosi told the editorial board of the Denver Post. Pelosi appeared with Rep. Jared Polis (D-CO), who with Rep. Earl Blumenauer (D-OR) is sponsoring legislation to reform federal marijuana laws.  Polis is proposing that the feds treat marijuana like alcohol.  He would strip the Drug Enforcement Agency of jurisdiction, and turn it over to a renamed Bureau of Alcohol, Tobacco, Marijuana, Firearms and Explosives. Seattle P-I, 3-12-13.

Op-ed: Senator should remember saying about goose and gander

State Sen. Mike Carrell (R-28) wants to fire Belinda Stewart from her job with the Department of Corrections for violating rules regarding the use of resources. Stewart is a former prison superintendent and communications director. She is now in charge of prison visitations, volunteers, and matters of gender and religion. In February 2013, she was fined by the State Ethics Board after the board concluded that she used state resources on behalf of a federal corrections agency and a nonprofit group to help released prison inmates. The Executive Ethics Board fined Stewart $17,000 with $3,600 suspended. We wonder why Carrell does not issue an equally harsh statement in regard to the numerous findings concerning fellow Republican state Sen. Pam Roach? Olympian, 3-12-13.

A Labor Secretary pick progressives will love—and Republicans will hate 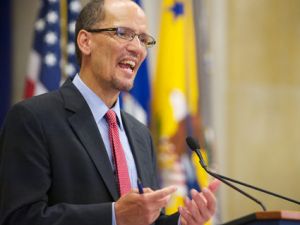 If President Barack Obama nominates Assistant Attorney General for Civil Rights Thomas Perez to head the Department of Labor, as media reports say he might, the president will be elevating one of the most effective and progressive senior administration officials to his cabinet. since Perez has taken charge, the division has blocked partisan voting schemes, cracked down on police brutality, protected gay and lesbian students from harassment, sued anti-immigrant Arizona sheriff Joe Arpaio for racial profiling, stood up against Islamophobia, and forced the two largest fair-housing settlements in history from banks that discriminated against minority homeowners. Mother Jones, 3-12-13.

For three years and more, policy debate in Washington has been dominated by warnings about the dangers of budget deficits. A few lonely economists have tried from the beginning to point out that this fixation is all wrong, that deficit spending is actually appropriate in a depressed economy. But even though the deficit scolds have been wrong about everything so far — where are the soaring interest rates we were promised? — protests that we are having the wrong conversation have consistently fallen on deaf ears. What’s really remarkable at this point, however, is the persistence of the deficit fixation in the face of rapidly changing facts. Paul Krugman, New York Times, 3-10-13.

Op-ed: Getting rich off of schoolchildren

Last week, Los Angeles provided yet another example of a cadre of anti-public-school millionaires swooping in to try (and in this case, fail) to buy a big-city school-board election. And once again, that sparked a round of Orwellian newspeak that distorts what’s really happening in education politics. You know how it goes: The pervasive media mythology tells us that the fight over the schoolhouse is supposedly a battle between greedy self-interested teachers who don’t care about children and benevolent billionaire “reformers” whose political activism is solely focused on the welfare of kids. Epitomizing the media narrative, the Wall Street Journal casts the latter in sanitized terms, reimagining the billionaires as philanthropic altruists “pushing for big changes they say will improve public schools.” Stop pretending wealthy CEOs pushing for charter schools are altruistic “reformers.” They’re raking in billions. David Sirota, Salon, 3-11-13.