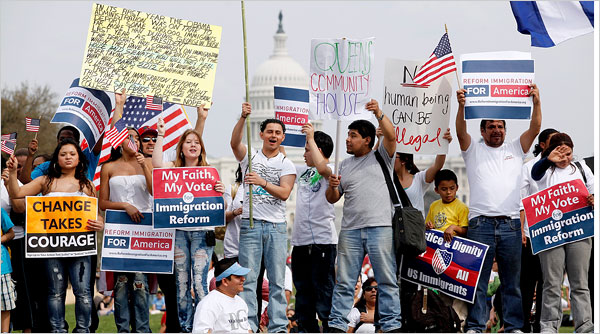 House Republicans’ latest revolt against immigration reform spells potential trouble for the party’s 2016 presidential candidates. The last thing the GOP needs in 2016 is another primary season marked by debate and dissension over the fraught issue. The party’s handling of immigration reform legislation since President Obama won reelection with 71 percent of the Hispanic vote reprises a decades-long pattern that has weakened the GOP in the competition for that bloc. On the one hand, there is a recognition that the party needs to do more to attract Hispanic votes. On the other, there are repeated actions, both individual and collective, that send the opposite signal. Republicans have long argued that they can appeal to Hispanics on issues other than immigration. So far, they have yet to prove it. Appeals to the patriotism of the Hispanic community have not worked consistently. Appeals to Hispanic small-business owners haven’t done it. Efforts to reach socially conservative Hispanics on issues such as abortion have produced few dividends. The party is still looking for an effective message for Hispanics. Immigration remains a gateway issue. Passage of immigration reform won’t necessarily win the next presidential nominee significantly more Hispanic votes. But its absence as a divisive issue in the nomination contest would give Republican candidates an opportunity to talk to Hispanic voters about new ideas or issues. Dan Balz, Washington Post, 2-8-14.