PacMed Center was built in 1932 as a U.S. Marine Hospital.

State House Speaker Frank Chopp has emerged as a central player in the effort to relocate community-college health programs into the PacMed Center using state dollars. The public authority that owns the building is debating whether to let a national homebuilder convert the historic Beacon Hill landmark into market-rate apartments, or go with a proposal to use it for college courses and nonprofit social-service providers. Chopp told its governing council recently that he’d cleared his calendar to personally help close a lease deal for Seattle Central Community College and service providers. Seattle Times, 8-4-13.

Once upon a time Seattle mayors had a relatively easy time getting re-elected. At the very least, they could count on making it through the primary. But lately, voters have grown fond of dumping hizzoner without even waiting until November. In 2001, they booted Paul Schell, marking the first time since 1936 an incumbent Seattle mayor had lost in a primary. His successor, Greg Nickels, lasted two terms but was rejected in the 2009 primary. In a few days, it could be Mayor Mike McGinn’s turn. While McGinn has a core of devoted supporters and can point to a city on the rise economically, his negative job-approval poll numbers and numerous critics show there is no guarantee he’ll survive after votes are counted Tuesday. Seattle Times, 8-3-13.

Class size appears to be the main sticking point between Seattle School District and its teachers’ union as they bargain a new three-year contract before school is scheduled to start next month. Seattle Education Association President Jonathan Knapp says the district’s latest proposal, made last week, would increase class sizes in Seattle by two students per class in grades four through twelve. That would create average class sizes of 30 students in fourth and fifth grades, and 32 students in grades six through 12. Class sizes in grades one through three would remain the same. “To have the biggest school district in the state now being an advocate for higher class sizes is just not moving in the right direction for Washington state or for Seattle,” Knapp said. KUOW, 8-2-13.

Woodinville’s city council is expected to approve its first policy regarding surveillance cameras this week, paving the way for the installation of the technology in public areas around town. City leaders authorized spending $55,000 on the cameras earlier this year, but only now have crafted a framework for how the cameras will operate, who has control and how they will be seen. “Anything we do in the public domain is being observed already,” said Woodinville Deputy Mayor Liz Aspen, “There’s a lot of different scenarios that you can use video surveillance that tends to enhance.” KING, 8-3-13.

Campaign ads in a special election for state Senate in the moderate, suburban 26th District of Pierce and Kitsap counties are competing to portray both candidates as extremists. The claims sometimes get skewed when the ads target Sen. Nathan Schlicher and Rep. Jan Angel on the budget. Tacoma News Tribune, 8-4-13.

Is food loophole in ethics rules getting abused?

The Legislature’s ethics arm is looking into a sticky question this fall: How much food paid for by lobbyists is too much free stuff for a Washington lawmaker to accept? A public inquiry by the Legislative Ethics Board in September is expected to explore whether the law imposes a limit on the frequency of free meals accepted by legislators. They already face a gift limit of $50, but the law allows meals in the course of a lawmaker’s regular duties — and that loophole appears to be big enough to let through an awful lot of club sandwiches, finger food, and steak dinners. Board lawyer Mike O’Connell says the citizens and lawmakers on the board eventually might need to seek changes to the law in light of news reports that at least a half dozen-lawmakers each accepted more than $1,000 worth of free meals between January to April. One member received 62 meals worth $2,029, according to an investigation by Associated Press and Northwest public radio reporters. Olympian, 8-4-13.

The National Labor Relations Board issued an eight-part complaint last week against Nippon Paper Industries USA, alleging the company committed eight unfair labor practices. Some of those practices allegedly occurred around March 20-25, when workers represented by the Western Association of Paper Workers Local 155 went on strike. They walked off the job two days after the company unilaterally imposed a contract that cut hourly wages by $3 an hour. The complaint was issued Wednesday, the same day union-represented workers approved a new six-year contract with Nippon that restores the $3 an hour to workers’ paychecks and retroactively pays the lost wages. The contract also freezes workers’ pay until at least 2016 and cuts post-retirement benefits. The union filed two dozen unfair labor practice complaints before and after the strike, many of which were resolved, union Organizing Coordinator Paul Cloer said Friday. Peninsula Daily News, 8-3-13.

The U.S. Department of Labor has sued a Burbank blueberry farm and packing house in a dispute that started with a surprise inspection by wage and hour investigators July 23. Blue Mountain Farms and Blue Mountain Farms Packing initially agreed to allow investigators on their property. But when investigators returned a second day, the owners threatened to call the sheriff. The Department of Labor filed a lawsuit in Eastern Washington U.S. District Court against the farm and packing house to gain access to its property before the short blueberry picking season ends. The Department of Labor indicated in court documents that it is cracking down on Northwest blueberry farmers after finding two years ago that many were not complying with child labor and minimum wage laws for migrant and seasonal workers. Tri-City Herald, 8-3-13. Former president Bill Clinton flew to Florida this spring as a favor to one of his best friends, headlining a fundraiser for Terry McAuliffe that brought in an easy $400,000 for his campaign for Virginia governor. But when the event’s host, trial lawyer John Morgan, pulled Clinton aside at his mansion that evening for a private chat, Morgan had another race in mind. “I told him, ‘If and when Hillary decides to do it, let this be her first stop in Florida,’ ” Morgan said he told Clinton, referring to a possible 2016 presidential bid by the former secretary of state. Morgan said Clinton replied, “We appreciate it.” Many Democrats see Mc­Auliffe’s gubernatorial campaign as the ground floor of a would-be Hillary Clinton presidential run — with his Virginia operation serving as a farm team in a critical swing state, and donors believing they can curry favor with her by helping Mc­Auliffe. But those taking this approach are doing so without Hillary Clinton’s direct blessing, and people close to her are trying to quash the notion, believing she could be damaged if her political strength is measured by the McAuliffe campaign. Washington Post, 8-4-13.

Tom Steyer, the environmentalist billionaire who has mounted a national campaign opposing the Keystone XL pipeline, has directed his political operation to spend heavily in the Virginia governor’s race in support of Democrat Terry McAuliffe, Politico has learned. Steyer, a California-based financier, instructed advisers Friday to launch television ads starting this week. The paid-media blitz from his group, NextGen Climate Action, will be the opening salvo in what’s expected to be a much larger effort aimed at mobilizing and turning out climate-oriented voters in a key off-year gubernatorial race. The enterprise will be a test both of Steyer’s individual influence in electoral politics, and of the impact of heavily funded advocacy politics within the Democratic Party. Politico, 8-4-13. 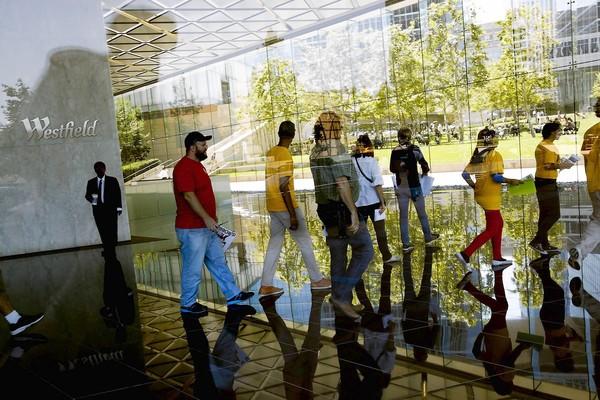 Refund LA union activists visit the lobby of Westfield in Century Plaza Towers in Los Angeles. They are targeting the mall operator as what they say is an example of big businesses that pay too little in taxes under Proposition 13

Labor groups are targeting one of Los Angeles’ most prominent real estate operations, mall giant Westfield, in a new campaign to highlight business property tax breaks tied to Proposition 13. A group of unions and anti-poverty organizations calling itself the ReFund LA Coalition launched a campaign last week against Australia-based Westfield Group, which they say has benefited from harmful tax policy established by the 35-year-old tax limiting initiative. The company has mall properties around the world and is among the largest retail property owners in Los Angeles County. The coalition wants commercial property owners like Westfield to pay more property taxes, which have been held down for both business and homeowners by Proposition 13 since 1978. Los Angeles Times, 8-4-13.

Last week House Republicans voted for the 40th time to repeal Obamacare. Like the previous 39 votes, this action will have no effect whatsoever. But it was a stand-in for what Republicans really want to do: repeal reality, and the laws of arithmetic in particular. The sad truth is that the modern GOP is lost in fantasy, unable to participate in actual governing. Just to be clear, I’m not talking about policy substance. I may believe that Republicans have their priorities all wrong, but that’s not the issue here. Instead, I’m talking about their apparent inability to accept very basic reality constraints, like the fact that you can’t cut overall spending without cutting spending on particular programs, or the fact that voting to repeal legislation doesn’t change the law when the other party controls the Senate and the White House. Paul Krugman, New York Times, 8-5-13.