(Daily Clips will resume publication Tuesday, July 9, so that the editor can party  on July 4 and all weekend. Have a happy and safe Independence Day.)

One month since John Lovick was appointed Snohomish County Executive, people from inside and outside county government have marveled at the difference. There’s a new atmosphere, a new set of priorities, and new faces in key jobs. Gone are the key-card-controlled doors and bulletproof glass in the executive office lobby that marked the reign of Aaron Reardon, whose administration was marked by secrecy and distrust of outsiders. Access was guarded. Council members were lucky to see Reardon once per year during their regular meetings. Lovick has been at least a weekly presence. Several elected officials visited Lovick’s office more during his first week or so as executive than they had during the nearly 10 years that Reardon occupied the corner office. Everett Herald, 7-2-13. In response to public concern about Catholic hospital systems affiliating with secular hospitals, Washington Gov. Jay Inslee has directed the Department of Health to update the state’s rules for approving hospital expansions. In May, the American Civil Liberties Union of Washington state and 10 other organizations asked Inslee for a six-month moratorium on hospital mergers, citing the large number of affiliations between secular and Catholic health systems. The concern was that the growing dominance of Catholic hospitals in this market would make it harder for patients to obtain controversial services such as abortion and euthanasia that are not permitted by church officials. Puget Sound Business Journal, 7-2-13.

State Sen. Ann Rivers (R-18) speaks at a rally hosted by opponents of the CRC on March 29.

Lawmakers from Clark County floated all kinds of ideas Monday about what the Columbia River Crossing project’s death means for Southwest Washington, and where the community should go from here. Some were reflective on the project’s failure, while others blamed their political adversaries. Some remained stalwart in their opposition to light rail, while others pointed out that a new bridge will still require agreement between high-density Portland and suburban Vancouver. Many called for time to let emotions cool. No one knew for sure how long it would take to come up with a new plan for the Interstate 5 Bridge. Vancouver Columbian, 7-1-13.

The South Fork of Manastash Creek is part of the land that the state will purchase from Plum Creek Timber as part of the package.

Washington Ecology Director Maia Bellon describes as a “home run” the more than $130 million in state funding the Legislature approved over the weekend for an ambitious plan to meet future water needs for farmers, fish and communities in the Yakima River Basin. The spending in the state capital budget is paired with a bill Gov. Jay Inslee signed late Sunday that commits the state to implement the basin water plan in the future. “It felt like we have hit a home run,” Bellon said Monday in a telephone interview. “This is setting the state up for an incredible model that can be used statewide.” The plan calls for new storage, fish passage and habitat improvements, operational changes, groundwater storage, water conservation, protection of watershed lands and greater use of water banks to transfer water to new uses. The overall package could cost $5 billion. Yakima Herald-Republic, 7-2-13.

State Sen. Ed Murray (D-43) copped a coveted “Outstanding” rating in the Municipal League of King County’s newly released rating of candidates for Seattle Mayor, a higher rating than given incumbent Mayor Mike McGinn and other challengers for the seventh-floor office at City Hall. McGinn and ex-City Councilman Peter Steinbrueck were a notch lower at “Very Good,” with businessman Charlie Staadecker and Councilman Bruce Harrell rated as “Good.” The Municipal League rating is the latest momentum-builder for Murray, trapped for months in the Legislature and legally unable to raise money. Murray won backing last week from the Seattle Metropolitan Chamber of Commerce, Washington Conservation Voters, ex-King County Executive Ron Sims, Seattle City Attorney Pete Holmes, and Councilman Tim Burgess, who dropped out of the mayoral race in May. Seattle P-I, 7-2-13.

Those hoping to see a statewide transportation deal come out of the State Legislature this year were no doubt thoroughly disappointed by the Majority Coalition Caucus-led Senate, which crushed any hope of such a package over the weekend. And you can count Seattle City Council member Tim Burgess as one of the thoroughly disappointed. In a post to his blog today, Burgess rips the Senate for its shortsighted inaction, saying: “The impact—or more accurately, disaster— for Seattle and the rest of King County will be felt next year when Metro will be forced to eliminate 17% of its current transit service due to lack of funds.” The move, according to Burgess, will “create congestion chaos on city streets (even worse than what we see today).” Seattle Weekly, 7-2-13.

When Garfield High School teachers refused to administer a standardized test of students last winter, they unleashed an international outpouring of support. Eventually, the teachers’ stand and the uproar prompted Seattle Schools Superintendent Jose Banda to suspend mandatory high school use of the MAP test. David faced down Goliath — and his consultants, PR firms, lobbyists, think tanks, advocacy groups, foundations and political and media friends. Where did David get the nerve? The resolve? Why not just sign an online petition and call it good? The resolve came from supporters all over the city—and, eventually, all over the country—and the delivery of five large pizzas from a supporter in Florida at a crucial time. Crosscut, 7-2-13.

The Obama administration will not penalize businesses that do not provide health insurance in 2014, the Treasury Department announced Tuesday. Instead, it will delay enforcement of a major Affordable Care Act requirement that all employers with more than 50 employees provide coverage to their workers until 2015. The administration said it would postpone the provision after hearing significant concerns from employers about the challenges of implementing it. The Affordable Care Act requires all employers with more than 50 full-time workers provide health insurance or pay steep fines. That policy had raised concerns about companies downsizing their workforce or cutting workers’ hours to dodge the new mandate. Washington Post, 7-2-13.

New York’s top prosecutor is investigating some of the state’s largest employers over their use of ATM-style cards to pay their hourly employees. New York attorney general Eric Schneiderman has sent letters seeking information to about 20 employers, including McDonald’s, Walgreen, and Wal-Mart, say people briefed on the matter. The inquiry comes as a growing number of companies are abandoning paper paychecks and direct deposit to offer prepaid cards. But consumer lawyers, employees, and state and federal regulators have said that in the vast majority of cases, use of the cards can generate a range of fees — 50 cents for a balance inquiry and $2.25 for an out-of-network ATM. Those fees can quickly devour the pay of part-time and low-wage workers. New York Times, 7-2-13. 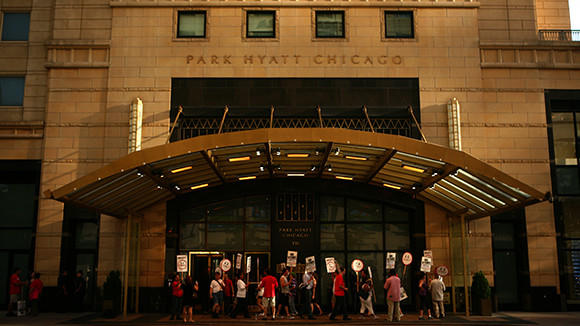 Hotel workers strike outside the Park Hyatt Chicago in 2011.

After a blistering four-year labor battle, Hyatt Hotels Corp. and workers union Unite Here reached a tentative settlement that will give employees pay and benefits increases for nearly a decade, going back to 2009 and reaching forward to mid-2018. The warring parties hammered out a national agreement, announced Monday, for workers in Chicago, the company’s home base, and in San Francisco, Honolulu, and Los Angeles. Altogether, about 5,000 workers would see pay and benefits packages rise an average of 4 percent a year, Hyatt said. If workers ratify the terms in the next few weeks, it would close the door on an acrimonious feud in which the union criticized Hyatt’s track record as an employer and the hotel company accused the union leadership of holding its members hostage to its recruitment agenda. Chicago Tribune, 7-1-13. 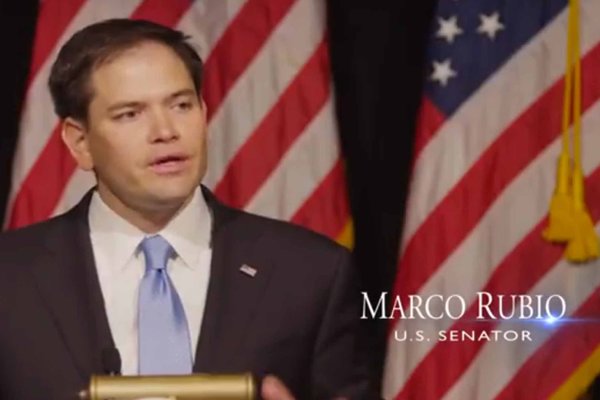 Fox News viewers in Florida will see a new commercial in the coming weeks urging them to call Senator Marco Rubio (R-FL). “Thank him for keeping his promise, and fighting to secure the border,” a narrator says in the ad, which is paid for by the conservative American Action Network. Another group, Americans for a Conservative Direction, led by former Gov. Haley Barbour of Mississippi and other top Republicans, has been running ads in Iowa lately that implore those watching to “stand with Marco Rubio to end de facto amnesty.” And when the Americans for Prosperity Foundation, the Koch brothers’ political advocacy group, decided to move its signature annual conference outside Washington for the first time, it picked a spot right in Rubio’s political backyard: Orlando. The keynote speaker? Rubio. Rubio’s advocacy for a proposal that would allow immigrants here illegally to gain a path to citizenship has made him a pariah among some rank-and-file Republicans. But many of the most powerful and well-financed forces in the party are moving to provide cover for the Florida senator and Republicans like him who are pushing to overhaul the nation’s immigration system. Their message: if we ever want to take back the White House, we have to stop devouring our own. New York Times, 7-1-13.