Seattle Police Chief John Diaz speaks to the media at a news conference Monday morning to announce he is stepping down from the top job in the department.

Chief John Diaz, who oversaw the Seattle Police Department for three tumultuous years, announced Monday he is stepping down. “This has been a profession that I truly believe in,” he said during a news conference. His retirement takes effect in May. Assistant Chief Jim Pugel will be interim chief, Mayor Mike McGinn said. Pugel has been with the department since 1983. Diaz, 55, was serving as interim chief when he was appointed chief by McGinn in June 2010. He replaced Gil Kerlikowske, who left Seattle to become drug czar in the Obama administration. Diaz has been under close scrutiny since the Department of Justice (DOJ) found in December 2011  that Seattle police officers had engaged in a pattern and practice of excessive force and displayed evidence of biased policing. The DOJ and the City of Seattle reached a settlement in July requiring the department to adopt sweeping reforms. Seattle Times, 4-8-13.

In the fight of his life, Rep. Roger Freeman (D-30) is playing to win. The state representative from Federal Way was recently diagnosed with stage 4 colon cancer. Doctors now have discovered that the cancer has spread to his liver and his lower lungs. Aside from a bronchial irritation last fall, Freeman had experienced no symptoms. That’s what made February’s diagnosis more shocking, he said, noting a lack of family history with cancer. The former Federal Way City Council member was elected to the state House of Representatives in November 2012. Federal Way Mirror, 4-6-13.

Kirkland is the only city withholding support of a region-wide Emergency Medical Services’ levy. But local firefighters this week called out city officials, urging them to leave the decision up to voters in November.

Kirkland is withholding support of a region-wide Emergency Medical Services’ levy — opposition that could jeopardize the highly regarded Medic One system if a resolution to the impasse isn’t found soon. But Kirkland firefighters this week called out city officials, urging them to leave the decision up to voters in November. On March 28 King County Executive Dow Constantine submitted an ordinance to the King County Council for the levy, which would fully fund the Medic One service. But the levy needs support from nine cities — those with more than 50,000 residents — before it can go to the voters this fall. Seattle, Auburn and Kirkland have not yet taken action, although Seattle and Auburn has shown support in region-wide task force meetings. Kirkland Reporter, 4-8-13.

Seattle-based payday lender Moneytree and its executives funneled nearly $200,000 into state lawmakers’ 2012 campaigns just months before a proposal emerged in the Legislature to create a new type of high-interest consumer loan. The company’s contributions in previous years rarely topped $140,000. Moneytree and its executives contributed a total of $193,755 to state lawmakers’ campaigns, with 98 percent of that money going toward Republican candidates, according to Public Disclosure Commission records. In addition to the state Republican Party, the payday lender also gave to Sen. Barbara Bailey (R-10), who ousted longtime Senate Transportation Chair Mary Margaret Haugen in November’s election. Bailey received $11,200 from Moneytree and its executives. Another $26,800 of Moneytree’s donations made their way to re-election efforts for Sen. Don Benton (R-17). Benton, who won re-election by 74 votes, is the ranking member on the Senate’s banking committee, Financial Institutions Housing & Insurance. Tacoma News Tribune, 4-8-13.

Alan Northrop anxiously waits outside a Senate committee hearing, his girlfriend rubbing his shoulders and whispering words of support as he prepares to sign in to testify about nearly two decades of freedom lost. This is the third year in a row he has traveled to the state Capitol to tell lawmakers his story: He was convicted of rape and served 17 years in prison before he was exonerated by DNA evidence. HB 1341, sponsored by Rep. Tina Orwall (D-33), would allow people who were wrongfully convicted to file a claim in Superior Court for damages against the state. Someone would have to show that the conviction was reversed or vacated based on significant evidence of actual innocence. Once a judge or jury determines the claim is valid the court can award damages. Associated Press (Seattle Times), 4-7-13.

Rep. Terry Nealey (R-16) offered an amendment to cut off the state’s claim to taxes back only as far as 2005. This cutoff date would have avoided the threat of further litigation, according to Nealey. But it would protect the state against only $30 million in claims – a fraction of the estimated $160 million cost of the court’s ruling. In the end, majority Democrats used their larger numbers on the panel to outvote the GOP and send HB 1920 to the floor. The money raised by the tax goes into an account for education. Olympian, 4-8-13.

At the Seattle Fire Department, the disability plague is particularly extreme compared with neighboring cities and other Seattle government retirees. More than 88 percent of the Seattle Fire retirees in the LEOFF-1 system are on disability retirement, many drawing tax-free benefits from the state. Associated Press (Seattle Times), 4-8-13. 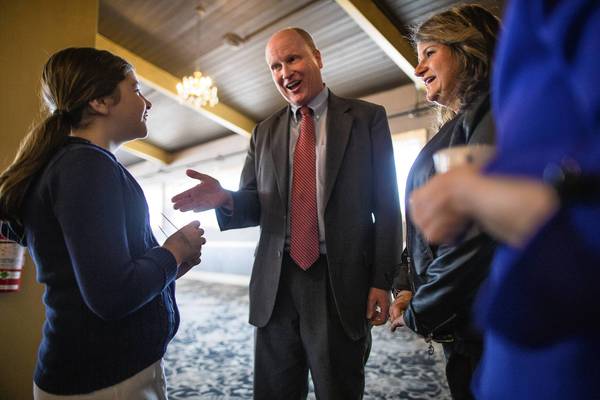 Massachusetts state Rep. Dan Winslow, a Republican candidate for a U.S. Senate seat, says he thinks gay couples should be able to make joint campaign contributions in the same way as other married couples.

While they await a Supreme Court ruling on same-sex marriage, gay rights advocates are taking their fight to a new arena: campaign finance law. A Republican candidate for U.S. Senate in Massachusetts who supports gay marriage has asked the Federal Election Commission to determine whether gay couples have the right to make joint contributions to political candidates. In a request for an advisory opinion Friday, attorneys for state Rep. Dan Winslow, a moderate Republican running in a special election to fill the seat vacated by Secretary of State John F. Kerry, asked the commission whether gay couples could donate to his campaign with a single check, as heterosexual married couples were allowed to do. Los Angeles Times, 4-8-13.

Grower Kristina Imperi prepares marijuana plants for the next stage of their growth in an indoor growhouse in Denver.

Colorado lawmakers stood the state’s current model for marijuana businesses on its head Monday, endorsing a proposal that would allow recreational pot stores and commercial growers to operate independently. Currently, medical-marijuana businesses in Colorado are vertically integrated, meaning growers and sellers are part of the same company and the stores grow most of what they sell. But Monday, at the final meeting of a legislative committee writing a bill for recreational marijuana rules, lawmakers backed a proposed model where growers and sellers would be separate. They also shrunk what had been a one-year window where only medical-marijuana businesses could apply for recreational pot shop licenses down to three months. The result is — potentially, since the full legislature must still endorse the proposals — a radical change to the economics of the cannabis industry in Colorado. Denver Post, 4-8-13. Students from Wilcox County High School who are fighting to have an integrated prom.

This seems hard to believe in 2013, but students at Wilcox County High School in Georgia have long held segregated proms — one for blacks and one for whites. This year a group of black and white teens who have been friends for years are fighting for a fully integrated prom. But it hasn’t been easy. Channel WSAV 3 reports that a group of girls in Rochelle, Ga., who have been buddies since fourth grade and do just about everything together are leading the effort. Traditionally students at Wilcox County High School have held two segregated proms, though they are not funded by or held at the school. This year, when the teens asked the Board of Education for one fully integrated prom, the board applauded the idea, but said it couldn’t stop segregated proms because the events are sponsored by parents and students. Washington Post, 4-5-13.

Today, 21.5 million Americans are unemployed or underemployed—about twice as many as six years ago, according to NPR. Yes, the unemployment rate dropped last month—but only because so many people gave up looking for work. See, after only four weeks of not looking for a job, an unemployed worker stops being counted. So far as the jobless numbers are concerned, that person ceases to exist. But, of course, they do exist and continue to be counted in other, more troubling statistics. More than 50 million Americans now live in poverty. That’s one in six Americans, and one in five American children. The last president who saw poverty at this level was LBJ, and it moved him to launch the war on poverty. An economy inflicting this much pain is a national crisis that should dominate discussion as we marshal our collective attention. Instead, we’re talking about guns and gay marriage. In a country where hunger should be a national disgrace, we spend more time talking about a skinny billionaire’s efforts to stop the fat from getting fatter. Stuart Stevens, Daily Beast, 4-9-13. (Grain of salt; Stevens was a Romney adviser whose client ignored his advice.)