This month, Washington State is holding a presidential primary. If you are registered to vote in King County or elsewhere in our great state, you should have received a ballot in the mail sometime between May 4th and May 7th. The following FAQ explains what this is all about and what you should do with your ballot.

Why is Washington holding a presidential primary? 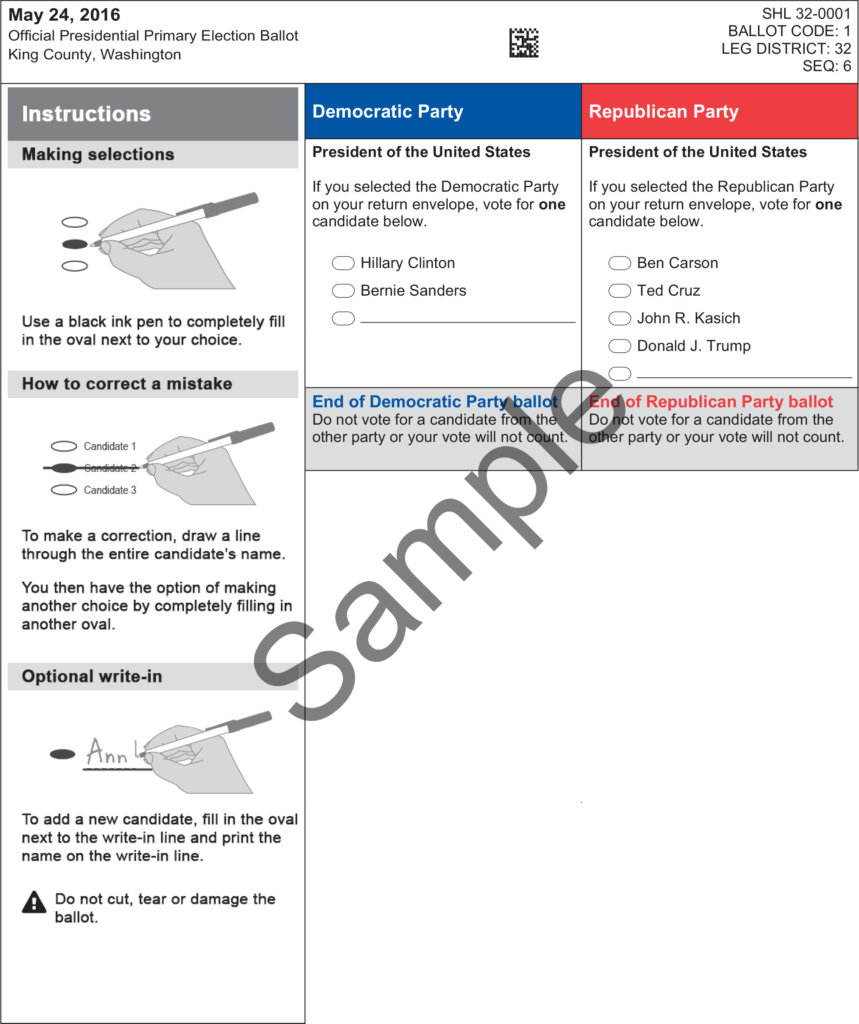 In King County, the 2016 presidential primary ballot looks like this.

Sometimes the Legislature cancels this election (as it did in 2012 and 2004), but in years like 2016, where there is no incumbent seeking reelection to the presidency, it has typically been held. Last year, the Legislature provided the funding needed to hold the election ($11.5 million), and so it is being held in accordance with the law.

Please note that the presidential primary is a unique and completely different election than the Top Two election we hold annually in August to narrow down the list of candidates who will appear on the general election ballot. Confusingly, state law and county elections officials call that election a primary, but it’s actually a qualifying election in which the top two vote getters advance regardless of party. In a true primary, people vote a party ballot and participate in the choosing of that party’s nominees. We have not held a true primary to choose nominees for state and local offices since 2007.

Wait a minute. I thought the Washington State Democratic Party had decided to use caucuses to allocate delegates to the Democratic National Convention…

That’s correct — we did! It is up to the Democratic and Republican parties to decide what to do with the results of the presidential primary. The parties may utilize the results for the purpose of determining how many national convention delegates each candidate should receive, but they don’t have to. A political party can nominate its candidates however it wishes. The First Amendment to the Constitution of the United States guarantees to us the right to freely assemble. How we go about choosing our party’s nominee for president is up to us to decide.

The Democratic Party requires that each state party come up with a Delegate Selection and Affirmative Action Plan and submit that plan to the Democratic National Committee for its approval. Some state parties — like New York, California, and Oregon — use the results of a primary to determine how many delegates the Democratic presidential candidates should get from their state. Other states — like Alaska, Hawaii, Idaho, or Washington — use caucuses instead.

The Democratic Party of Washington State has historically always used a caucus and convention system to allocate its national delegates, and your Washington State Democratic Central Committee (WSDCC) decided last year to use that method again in 2016. We held our precinct caucuses on March 26th, legislative district caucuses on April 17th, and county conventions/legislative district subcaucuses on May 1st. Congressional district caucuses are up next, on May 21st. That’s where we’ll elect our first group of national convention delegates.

You can read our state party’s Delegate Selection and Affirmative Action Plan here.

What are the Republicans doing?

The Washington State Republican Party previously decided to use the results of the presidential primary to allocate all of its forty-four national convention delegates to the 2016 Republican National Convention in Cleveland, Ohio. However, the Republican contest is effectively over now that Ted Cruz and John Kasich have withdrawn. No matter what the outcome of the Republican primary is here in Washington, Donald Trump will remain the presumptive nominee.

Since the Democratic Party won’t be making use of the presidential primary results to allocate delegates, should I even bother to return my ballot?

Yes, you should. We strongly encourage you to mark your ballot for Hillary or Bernie and return it before May 24th. Even though this election is just a straw poll, it’s critical that we all participate. Let’s show our fellow Washingtonians and the mass media that we want a Democrat to succeed President Obama as our nation’s Commander-in-Chief… not Donald Trump.

Remember that for your vote to count, you can only vote for one candidate on one of the two party ballots. If you vote for Bernie or Hillary, you must check the box on the return envelope attesting that you are a Democratic voter and that you will not participate in any other party’s nominating process this year. Failure to do this will cause your ballot to be invalidated.