Fast food workers said Thursday today that they were filing criminal complaints with the Seattle Police Department on the grounds that their employers committed wage theft, with employees in Seattle allegedly losing an estimated $100,000 a week. Rebecca Smith of the National Employment Law Project made the announcement on the steps of Seattle City Hall, calling wage theft a defining trend of the 21st century. It was attended by Mayor Mike McGinn, City Council member Mike O’Brien, chief criminal prosecutor Craig Sims, and supporters holding up signs that read “Make them pay.” Three fast food workers from the Ballard Taco Bell, Broadway Qdoba, and Northgate Subway came forward at the press conference, citing unfair employment practices that drove them to file complaints with the city. Caroline Durocher says her closing shifts at Taco Bell could sometimes stretch to five in the morning, while her manager had already clocked her out hours before, estimating $800 stolen from her in the six months she worked there. Seattle Weekly, 7-25-13.

Jon Greenberg has provided a “unique and immediately relevant education” to high school students at Seattle’s Center School and should not have been removed from its faculty, two King County Council members said Thursday in a pointed letter to Seattle Schools Superintendent Jose Banda. “We urge you to reconsider your decision to remove Mr. Greenberg from the Center School,” said King County Council Chair Larry Gossett and Councilman Larry Phillips. Greenberg taught a popular citizenship and social justice curriculum at the high school in Seattle Center. He was twice investigated by the Seattle Public Schools — based on complaints by one student’s family that the class created an intimidating atmosphere — and has been transferred to Hamilton International Middle School. The school district’s “investigation” did not involve talking to any students beyond the complainant. Dozens of students and parents showed up at a Seattle School Board meeting last month, where they received a patronizing, noncommittal response to pleas that Greenberg’s reassignment be canceled. Seattle P-I, 7-25-13.

An open letter to Jeff Bezos: A contract worker’s take on working conditions an productivity at Amazon.com

Dear Jeff Bezos: In your position, I imagine that you rarely have an opportunity to receive feedback from one of your temporary-contract employees. I thought you should have some input. I hope you find this useful. Having just completed my maximum of eleven months of contract work Amazon allows, I thought I would share my thoughts on your practice of hiring a staff that is made up of temporary-contract workers. Although it may seem like the company is saving money — because you don’t have to provide temporary workers with medical coverage or paid vacation time — the revolving door of new hires encourages low quality work, inconsistent productivity, and wastes useful resources on training. Steven Barker, for Geekwire, 7-25-13.

BNSF Railway Co. is polluting Washington’s waterways with releases of coal dust and chunks of coal from open-top rail cars, a lawsuit filed Wednesday alleges. The Spokane Riverkeeper joined the Sierra Club, Puget Soundkeeper Alliance, and other nonprofit groups in filing the suit in U.S. District Court in Spokane. A companion lawsuit was filed in Western Washington. The lawsuit names the Spokane River and its Hangman Creek tributary among Eastern Washington waterways affected by coal releases, which the suit says is a violation of the federal Clean Water Act. The Spokane Riverkeeper’s Bart Mihailovich said he and volunteers collected pebble-size chunks of coal from the river and Hangman Creek near three railroad crossings last spring. A lab analysis confirmed that the material was coal, he said. Spokesman-Review, 7-25-13. 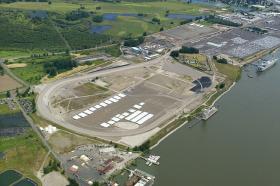 The proposed Tesoro/Savage crude oil terminal would be built on this rail loop at the Port of Vancouver, Washington on the Columbia River.

Hundreds of demonstrators are expected to turn out by land and water in Vancouver Saturday to protest plans to send large amounts of coal and oil through the Pacific Northwest on its way to be burned elsewhere. The protest is part of a national series of actions against the fossil fuel industry organized by the group 350.org. It comes after Port of Vancouver commissioners Tuesday, with a unanimous vote, approved a lease for what would be the largest oil terminal in the Pacific Northwest. Coal terminals have been proposed elsewhere in the Northwest. Vancouver Columbian, 7-25-13. 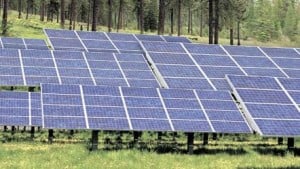 This computer-generated image from 2009 offers a preview of what the Teanaway Solar Preserve will look like. The company says it still plans to build.

The Teanaway Solar Reserve LLC hasn’t given up on building one of the largest solar-power arrays in the nation, four miles northeast of Cle Elum in the Teanaway River valley. The company proposed the project in mid-2009 and recently reaffirmed its commitment to pursue the construction and operation of the solar farm. It’s estimated to have a capacity of generating up to 75 megawatts from 400,000 photovoltaic panels spread on 477 acres within a 982-acre parcel owned by American Forest Land Co. More than 50,000 acres of AFLC lands in the Teanaway are planned to be sold by Sept. 15 to state government for $99 million as part of the Yakima River basin water plan. The sale doesn’t include a 982-acre parcel for the solar farm. Ellensburg Record, 7-24-13. 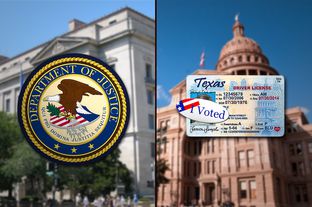 The U.S. Department of Justice will ask a federal court to require Texas to seek permission before the state can change its election laws, U.S. Attorney General Eric Holder said in a speech to the National Urban League Thursday. Holder told the group that the Texas Legislature was found to have intentionally discriminated when it drew congressional and legislative redistricting maps in 2011. Holder suggested that that evidence should be enough to subject the state to a “bail in” provision in the federal Voting Rights Act. The Texas AG’s office did not have an immediate response to Holder’s remarks. Gov. Rick Perry said the federal government is trying to “weaken Texas’ voter integrity laws. Once again, the Obama Administration is demonstrating utter contempt for our country’s system of checks and balances, not to mention the U.S. Constitution,” the governor said in a written statement. Texas Tribune, 7-25-13.

But maybe Holder should be dealing with North Carolina first 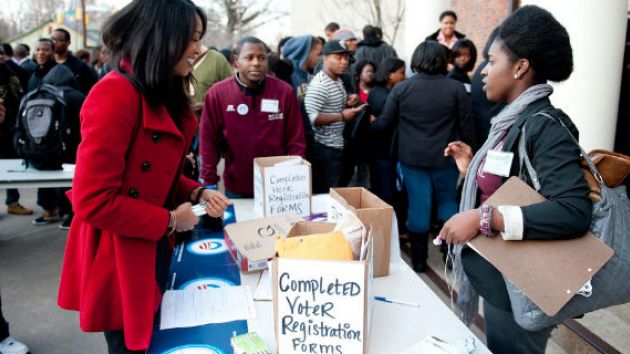 North Carolina’s GOP-led legislature has taken many controversial steps in recent weeks—sneaking anti-abortion measures into a motorcycle safety law and cutting unemployment benefits for 70,000 North Carolinians, to name two. But new revisions to a photo ID voting bill, which passed the House in April and the Senate Wednesday, might take the cake. The revised bill prohibits same-day registration, ends preregistration for 16- and 17-year-olds, eliminates one week of early voting, prevents counties from extending voting hours due to long lines (often caused by cuts in early voting) or other extraordinary circumstances, scratches college ID cards and other forms of identification from the very short list of acceptable state-issued photo IDs, and outlaws certain types of voter registration drives. It’s quite possibly the most restrictive voter ID bill in recent years, says Denise Leiberman, senior attorney for Advancement Project, a nonprofit civil rights organization. Mother Jones, 7-24-13.

As conservatives escalate their efforts to shut down the government if Obamacare is not defunded, a familiar voice of reason is returning to the fray to send them a message: Dream on. Rep. Tom Cole (R-OK), a deputy majority whip, has taken to the airwaves over the last 24 hours to pour cold water on GOP attempts to demand that the party withhold support for keeping the federal government open after Sept. 30 unless Obamacare is gutted. Cole has dismissed the conservative effort as a “temper tantrum” and likened it to “blackmail.” The five-term congressman was responding to a House effort by Rep. Mark Meadows (R-NC), backed by influential conservative groups, to push for defunding Obamacare in the annual spending bill that must pass by Sept. 30 to avoid a government shutdown. Talking Points Memo, 7-25-13.

Plagued by infighting and deep ideological divisions, state Republican parties from Alaska to Maine are mired in dysfunction. Several state Republican leaders have been forced out or resigned in recent months, and many state GOP parties face financial problems and skeptical national leaders. Democrats are not immune to such problems, but the conflicts on the Republican side highlight the tug of war over the GOP’s future as national leaders work to improve the party’s brand. At the same time, the Republican dysfunction raises questions about the GOP’s ability to coordinate political activities in key battleground states ahead of next year’s midterm congressional elections. Associated Press (Boston Globe), 7-25-13. 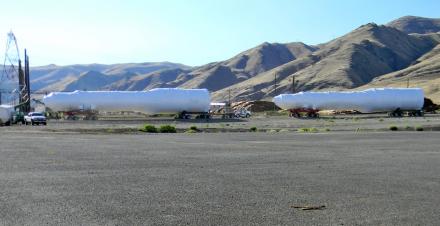 A member of the environmental group Friends of the Clearwater took this photo on July 22 at the Port of Wilma of what appear to be Omega Morgan’s ‘megaload’ shipments.

An Oregon shipping company and the U.S. Forest Service appear to be at a standoff over whether huge pieces of oil equipment will pass through a scenic stretch of Idaho. These so-called “megaloads” are ultimately headed to the oil sands of Alberta, Canada. The Forest Service says it can’t authorize shipments that are as wide as two lanes and the length of five semi-trailers to use a protected portion of Highway 12—at least not without a lengthy review. Yet this week, two pieces of water evaporation equipment destined for Alberta arrived at the Port of Wilma near Lewiston, Idaho. They’re now waiting at the starting point of the route. What happens next isn’t clear. KPLU, 7-25-13.

One of the worst myths Democratic partisans love to tell themselves—and everyone else—is that the GOP refuses to support President Obama no matter what he does. Like its close cousin – the massively deceitful inside-DC grievance that the two parties refuse to cooperate on anything – it’s hard to overstate how false this Democratic myth is. When it comes to foreign policy, war, assassinations, drones, surveillance, secrecy, and civil liberties, President Obama’s most stalwart, enthusiastic defenders are often found among the most radical precincts of the Republican Party. The extraordinary events that took place in the House of Representatives yesterday are perhaps the most vivid illustration yet of this dynamic, and it independently reveals several other important trends. Glenn Greenwald, the Guardian, 7-25-13.