The desertion of Mike McGinn 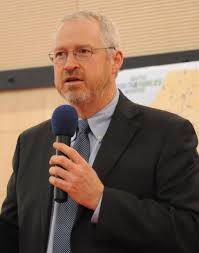 The dominoes keep falling. The base is shrinking and one-time loyalists are jumping ship. Trying times, indeed, for Mike McGinn. An ex-governor, two former Seattle mayors, the city attorney, a majority of the city council, the police guild and firefighters union, the Washington Conservation Voters, are rallying around challenger Ed Murray. Some of the political defections were expected – but not all. McGinn, for example, took a huge and unexpected blow last month when a long list of club owners and nightlife entrepreneurs – solidly in his camp four years ago – decided to cut and run and put their money, their e-mail lists, and social media connections behind the longtime state lawmaker. It would be easy to blame the desertion on policy differences – that it’s nothing personal. Except that it is personal – especially among the council, whose relationship with the beleaguered mayor appears beyond repair. Seattle Weekly, 10-7-13.

Murray being prepped by a political master

He’s ahead in polls for Seattle Mayor, but State Sen. Ed Murray hasn’t exactly brought the house down on the campaign trail, talking about “togetherness” and his “coalition-building skills.” With a trio of TV debates coming up — starting Wednesday at KING-TV — Murray has acquired a volunteer debate adviser who has coached Presidents Clinton and Obama, and was present at the notably successful roll out of Gov. Jay Inslee’s TV campaign and program in 2012. The adviser is Frank Greer.  Based in Seattle, Greer  broke into national prominence with three Democratic Senate victories in 1986 — including Brock Adams in Washington — and by masterminding election of an African-American, Doug Wilder, as governor of Virginia in 1989.  He was communications director — and wife Stephanie Solien served as national political director — of the 1992 Bill Clinton campaign. Murray is as stiff a challenge as Greer has faced in some time. Seattle P-I, 10-7-13. The Seattle City Council Monday gave a limited way forward to the city’s medical-marijuana dispensaries, which face an uncertain future with the advent of statewide recreational marijuana sales. The City Council gave the medical dispensaries and growers until January 2015 to apply for a state license to do business in compliance with Washington’s new marijuana laws. The council also voted unanimously to limit the size of growing facilities and establish boundaries for where marijuana-related facilities can operate when legal sales of recreational cannabis start next year under voter-approved Initiative 502. Growing operations may be no larger than 20,000 square feet in industrial areas and 10,000 square feet in industrial-commercial zones such as Sodo, the council decided. the status of medical marijuana dispensaries remains unclear, and several advocates at Monday’s council meeting urged the council to exempt medical-marijuana operations from having to obtain a new license. Council members said giving medical-marijuana dispensaries a 15-month “grace period” offers an opportunity for those providers to obtain legal status under the new system. Puget Sound Business Journal, 10-7-13. 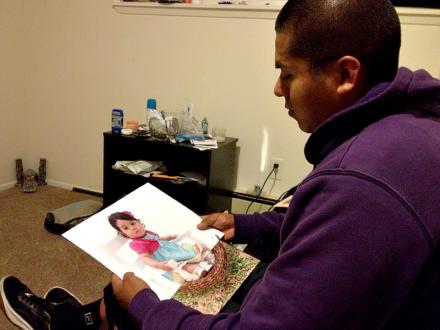 Baggage handler Socrates Bravo looks at a photo of his daughter in his SeaTac apartment.

Socrates Bravo often works 15-hour days, and he’d like a raise. But as a baggage handler at Sea-Tac International Airport, he doesn’t have many options. Traditionally, when workers want better wages, they join a union. So why don’t airport workers like Bravo just do that? The reason: They’re stuck in a legal limbo under federal labor law. And that’s why they’ve turned to the ballot box instead.  Bravo and his fellow baggage handlers are covered by the Railway Labor Act, which was written to forestall nationwide interruptions in rail traffic, and was later extended to airlines. Different criteria apply to them. They have a higher bar for unionization; they have to organize across the country, not just in one city. This might be feasible for flight crews; it is almost impossible for baggage handlers. KPLU, 10-7-13.

More than 9,400 people in Washington state have signed up for insurance for either themselves or their families in the first week of the state’s new health exchange open enrollment period, according to numbers released Monday. Numbers from the Washington Health Benefit Exchange show that 9,452 enrollments have been completed since the exchange went live Oct. 1. An additional 10,000 applications have been completed and are pending a payment process for enrollment, officials said. The exchange’s website had more than 837,000 visits by 165,332 unique visitors since last week. More than 39,000 accounts were set up, which means people filled out forms with their personal information but didn’t necessarily finish their application or sign up for insurance. Exchange spokesman Michael Marchand said the numbers show that there’s a “tremendous amount of interest” in the new exchange, despite the technical glitches the site encountered last week. Associated Press (Olympian), 10-7-13.

The sprawling site of a former aluminum smelter in Longview faces so many hurdles in its bid to be reborn as a coal-shipping terminal that it’s hard to know where to start. Terminal developers must navigate a bramble of none-too-easy to obtain permits from local, state, and federal governments. Spirited opposition gathers in the form of activists carrying a litany of concerns, among them: the exacerbation of human-induced climate change, increased train traffic in communities small and large, and toxic coal discharges from trains into the Columbia River. And the global market for coal softens, prompting business analysts to question the wisdom of massive capital investment in exports. It’s all coming to Clark County Wednesday, when opponents, eyeing an opportunity to defeat dirty coal, and backers, envisioning jobs triggered by a legal commodity, are expected to pack the Clark County Fairgrounds for hours-long scoping meetings under state and federal environmental laws. Vancouver Columbian, 10-6-13.

Geyser Valley and the upper Elwha River from the north

The 2013 fall chinook spawning season was one of the strongest since 1992, and the king salmon are moving into more new habitat in the Elwha River, according to fish biologists. “It is truly exciting to see the chinook finding their way into clear water tributaries and reaching the base of Glines Canyon Dam. This is what we have always known was coming,” Olympic National Park Superintendent Sarah Creachbaum said during the run, which ended recently. The Elwha River was historically one of the most productive salmon streams in the Pacific Northwest, home to all five species of Pacific salmon. Once dam removal is complete, fish biologists believe the Elwha River salmon and steelhead populations could grow to nearly 400,000 returning adult salmon per year. Fishing is not permitted in the Elwha River during the $325 million restoration project that includes the demolition of two dams. Peninsula Daily News, 10-7-13.

Nearly three years after a band of renegade congressmen brought the tea party insurgency to Washington, there are early rumblings of a political backlash in some of their districts. In the Dutch Reformed country of West Michigan, long a bastion of mainstream, mannerly conservatism, voters in 2010 handed the House seat once held by Gerald R. Ford to Justin Amash, a 33-year-old revolutionary and heir to the libertarian mantle of former congressman Ron Paul (R-TX). Amash was part of an attempted coup against House Speaker John A. Boehner (R- OH) and is a leader of the House tea party faction that helped force a government shutdown last week. But within Grand Rapids’ powerful business establishment, patience is running low with Amash’s ideological agenda and tactics. Some business leaders are recruiting a Republican primary challenger who they hope will serve the old-fashioned way — by working the inside game and playing nice to gain influence and solve problems for the district. They are tired of tea party governance, as exemplified by the budget fight that led to the shutdown and threatens a first-ever U.S. credit default. Washington Post, 10-6-13.

Sen. Jim Inhofe (R-OK) underwent emergency heart surgery in Tulsa Friday after a routine test showed extreme blockage in five arteries. Inhofe had quadruple bypass surgery and was hospitalized at St. John Medical Center. The Tulsa Republican said in an interview from the hospital Monday he felt great and was expecting to go home Tuesday. He said he’d return to Washington as soon as possible. Inhofe, 78, said he has never had any kind of heart trouble and hadn’t felt any symptoms of the blocked arteries. Oklahoman, 10-8-13.

Truck drivers slow down traffic on the highway A1 on Oct. 18, 2010, near Lille, France. American truckers plan a similar protest beginning Friday, according to organizers.

This should be fun. A group of tractor-trailer drivers will intentionally clog the inner loop of the Washington, D.C., beltway beginning on the morning of Oct. 11, according to a coordinator of the upcoming “Truckers Ride for the Constitution” rally. Organizers of the three-day ride want to call attention to a litany of trucker frustrations and express their disapproval of national political leaders. Earl Conlon, a Georgia trucker who is handling logistics for the protest, told U.S. News tractor-trailer drivers will circle the beltway “three lanes deep” as he rides with other participants to Congress to seek the arrest of congressmen for allegedly disregarding the Constitution. (Here’s a hint as to who these people are: that doesn’t include the tea partiers.) Zeeda Andrews, a former country music singer helping promote the protest, said last week participants would present demands to congressmen – including the impeachment of President Barack Obama – and give the congressmen an opportunity to agree to the demands in exchange for canceling the ride. US News, 10-7-13.

From a Nissan plant in Canton, Mississippi, a battle to shape the UAW’s future reaches around the world 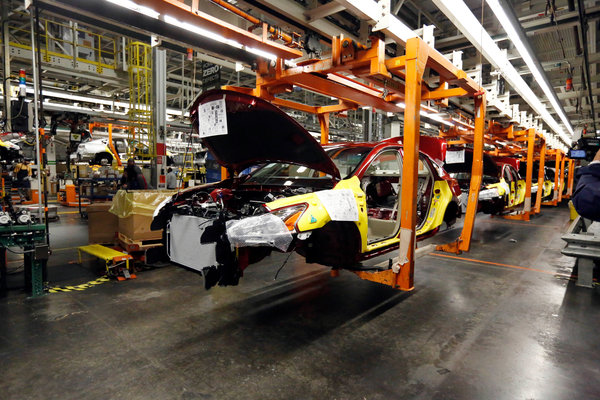 Altimas on an assembly line at the Canton, Miss., plant await installation of power steering pumps. Nissan is the state’s second-largest private employer.

The United Automobile Workers — desperate to make inroads in the anti-union South where Toyota, Volkswagen and other foreign automakers have assembly plants — has never tried a unionization drive quite like the one at the Nissan plant here. It has enlisted thousands of union members in Brazil to picket Nissan dealerships there as the company prepares to co-sponsor the 2016 Olympics in Rio de Janeiro. The union has sent a team of Mississippi ministers and workers to South Africa, where Nissan has an assembly plant, to try to embarrass the company with accusations that it violates workers’ rights at the Canton plant. Over the next few weeks, a delegation of U.A.W. leaders and supporters will travel to Tokyo, and to Paris, where Renault, Nissan’s partner, is based, to publicize a report by a Cornell University professor that asserts that Nissan’s managers have illegally threatened to close the Mississippi plant if workers vote to unionize. These efforts are largely directed at Nissan’s part-Brazilian, part-French chief executive, Carlos Ghosn, a renowned cost cutter who has said the company prefers communicating with its Mississippi workers without a union. New York Times, 10-6-13.