Suddenly the opposing forces are in a tie. The Republican-leaning Majority Coalition Caucus, which had a bare one-vote advantage, now has 24 votes. The Senate Democratic Caucus also has 24 votes. And if at any point a bill comes down to a 24-24 vote, Lt. Gov. Brad Owen casts the tie-breaker. He’s a Democrat. So for the next few days, possibly a week, possibly longer, until a replacement can be named for Carrell, it has become at least technically possible for Democrats to retake control of the Legislature’s upper chamber. That has implications far beyond the Capitol. Democrats already control the House and the governor’s mansion, and if they move fast enough and work as a team, they could pass a budget and every other piece of legislation favored by the party, adjourn the current special session in a flash and go home. (Erik Smith’s nightmare.) Washington State Wire, 5-30-13.

Over (Republican) objections that the Legislature was unconstitutionally reaching into the past to collect taxes, the House passed a change to the estate tax law that attempts to erase a loss in court. HB 2064 passed on a 51-40 vote after Democrats described it as a technical fix to close a loophole the Supreme Court opened in tax law, and necessary to pay for schools. The estate tax is deposited in the school trust fund. Rep. Timm Ormsby (D-3) said the Legislature has reached a consensus that it must do a better job of paying for education, and closing the loophole in the estate tax law is one component of that. Spokesman-Review, 5-30-13.

Group seeks paid sick leave for all who work in Tacoma

A group calling itself Healthy Tacoma has begun quietly building support in recent months for a new city ordinance to require private employers across Tacoma to provide workers with paid sick leave. The group — which claims as members more than 30 human rights and minority groups, labor unions, and small business, civic, and faith-based organizations – is now ready to go public with what it’s calling the “Paid Sick and Safe Time” plan. Tacoma City Councilman Ryan Mello — who backs a sick leave measure — said Wednesday he’s convinced a “critical mass of support” for the idea exists. The Healthy Tacoma coalition said it also has the support of council members Anders Ibsen, Robert Thoms, and Lauren Walker. “I expect something being formally drafted in the next two to four weeks,” Mello said. “My hope is that we can have the council consider this policy by the end of the summer.” Tacoma News Tribune, 5-30-13.

One potentially divisive piece of the Washington Senate-House budget talks is whether the Washington Department of Ecology faces significant cuts, including the potential closure of its Bellingham office. As with much of the rest of the state’s operating budget, the Republican-oriented Senate wants to trim part of Ecology’s budget for 2013-2015. The Bellingham office keeps tabs on that city’s waterfront toxic cleanup efforts, and recently launched a Whatcom County Clean Water program. It supervises that area’s oil spill prevention and response programs, conducting 221 inspections in 2012 and responding to 619 spills in the Bellingham area since late 2006. Nearby Anacortes is the center for oil refining and shipping in the state. The Ecology Department is a co-lead agency to review permits for the proposed coal export terminal at Cherry Point with the Bellingham office involved in the environmental impact study process. Crosscut, 5-30-13.

Researcher Wee Yee is developing data to prove a soup of crushed cherries and brown sugar is effective in detecting the presence of cherry fruit fly larvae, a pest that poses problems for Washington growers seeking to sell overseas. Yee’s research, along with that of other scientists at the U.S. Department of Agriculture’s Agriculture Research Service laboratory, brought U.S. Sen. Maria Cantwell (D-WA) to the lab, northeast of Wapato, Wednesday to emphasize the importance for Congress to renew the farm bill for another five years. Cantwell, backed by a grower and an industry official who works on trade and regulatory issues, said a new farm bill is critical to the future of research that helps growers provide thousands of jobs and support the local economy. Yakima Herald-Republic, 5-30-13.

Reardon’s last day as SnoCo Exec expected to be today

The Aaron Reardon era is expected to end for Snohomish County government at 5 p.m. today. Reardon, 42, was in the office Thursday, keeping a low profile but speaking with television reporters. In keeping with the county charter, Deputy County Executive Gary Haakenson said he expects to take over after midnight Friday and will serve as acting executive until a new executive is appointed and sworn in. That could happen early next week. Reardon was 33 when he first took county office in 2004, then the youngest county executive in the nation. He was re-elected to a third and final term in 2011, despite word that he was the focus of a Washington State Patrol investigation into his use of public money in pursuit of an extramarital affair with a county worker. Everett Herald, 5-31-13.

Fast food workers walk off the job in Seattle

Walkouts by fast food workers spread across Seattle Thursday including this Arby’s at 6th Avenue South and South Michigan Street in Georgetown.

A strike by fast food workers hit Seattle Thursday and organizers say more outlets have been targeted by the movement. A Lake City Burger King closed up shop for the day after workers walked out Thursday morning, according to organizers Strike for Poverty. The franchise owners couldn’t be reached for comment. The organizers said the Burger King walk out was just the first of many. The strike came just hours after a strike late Wednesday evening caused a Taco Bell in Ballard to shut down due to short staffing, according to organizers. Will Pittz with Washington Community Action Network said workers are asking for a living wage of $15 per hour and the right to unionize without retaliation. He said more workers are planning to walk off the job and strike at numerous Seattle-area fast food outlets, though he could not say exactly how many outlets or workers would be involved. Seattle Times, 5-30-13. During a visit to Seattle Thursday, former Mexican President Vicente Fox made it clear that America’s drug policy is personal for him and the people of his country. Fox spoke in downtown Seattle at a press conference for Diego Pellicer, a Seattle-based company that’s striving to become the largest legal marijuana provider in the nation. Although he’s not involved with the company, Fox said he came to support the efforts of Washington state and Colorado to end prohibition of marijuana, a move he said could help reduce the violence associated with the illicit drug market. “The state of Washington has decided to lead a new path, a path to change the policy by legalizing medical and social use of cannabis,” Fox said. “In Mexico we welcome this initiative, because the cost of the war, in the case of Mexico, is becoming unbearable.” Puget Sound Business Journal, 5-30-13.

Marijuana packaged for sale at Seattle dispensary: time for a national brand?

Jamen Shively, 45, is talking big. He was a manager at Microsoft, which suggests money and connections. Shively needs to attract backers, to intimidate competitors, and to accustom people to the idea of mass marketing in the marijuana industry. National branded marijuana has to go from being a farfetched idea to an ordinary idea, which means people have to think about it for a while. From a longer-term perspective, maybe Shively’s grandstanding is a good thing. It raises the political heat on Obama. Our president is a respecter of Microsoft money. He comes here and fills up on it often enough. Modern Democrats respect tech entrepreneurs. So, when Shively says the world is changing, and he’s not afraid to stick his neck out (rhetorically, at least), and announce that he wants the federal law against marijuana swept aside, and marijuana trade opened up with Mexico, maybe he’s speaking words that will be heard. Bruce Ramsey, Seattle Times, 5-30-13. Concerned grandparent Sue Lile of Carmel, Ind., shows her opposition to Common Core standards during a rally in January at the State House rotunda in Indianapolis.

Tea party groups over the past few weeks have suddenly and successfully pressured Republican governors to reassess their support for a rare bipartisan initiative backed by President Obama to overhaul the nation’s public schools. Activists have donned matching T-shirts and packed buses bound for state legislative hearing rooms in Harrisburg, Pa., grilled Georgia education officials at a local Republican Party breakfast and deluged Michigan lawmakers with phone calls urging opposition to the Common Core State Standards. Lawmakers have responded by introducing legislation that would at least temporarily block the standards in at least nine states, including two that have put the program on hold. Washington Post, 5-30-13. 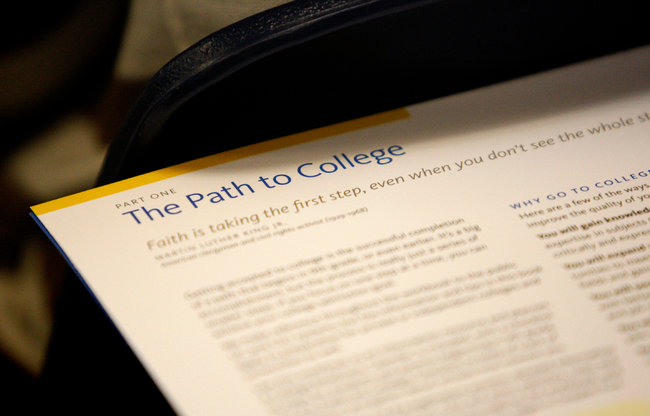 Literature given out at a Pico Rivera, Calif., high school as part of an outreach program aimed at low-income students.

Opponents of race-based affirmative action in college admissions urge that colleges use a different tool to encourage diversity: giving a leg up to poor students. But many educators see real limits to how eager colleges are to enroll more poor students, no matter how qualified — and the reason is money. “It’s expensive,” said Donald E. Heller, dean of the College of Education at Michigan State University. “You have to go out and identify them, recruit them and get them to apply, and then it’s really expensive once they enroll because they need more financial aid.” The Supreme Court is expected to rule soon in a closely watched case over admissions at the University of Texas at Austin, and the court could outlaw any consideration of race. New York Times, 5-30-13.

Hotel magnate Jim Graves — who fell to Bachmann in a close contest last year and had intended to challenge the tea party matriarch again in 2014 – said Thursday that he is indefinitely suspending his fledgling campaign. Why? Bachmann’s exit from the race amounts to a victory, Graves explained. “Basically, after all that’s gone on, and with Michele Bachmann now stepping down, I’ve been talking to my friends and family and frankly, the feeling is, ‘Mission Accomplished,’” Graves told the local political blog MinnPost. “She wasn’t representing the people of the 6th District appropriately, and now she won’t be representing them. There’s no way anyone could run and win who would be worse than Michele Bachmann. So we accomplished that task.” Talking Points Memo, 5-31-13.

Those jeans from the Gap? There’s blood on them Bloodied T-shirts display the names of the dead from recent Bangladesh factory disasters at a Gap shareholder meeting last week, protesting the company’s refusal to sign an agreement to protect garment factory workers.

Although Gap, the world’s third largest apparel company, used that Avett Brothers song in commercials last fall, the corporation does not believe we’re really the same. By refusing to join other clothing retailers in a binding agreement to protect Bangladeshi workers, more than 1,200 of whom have died in factory fires and collapses in recent months, Gap is saying: You and I, we’re not the same; I don’t hear your voice or want to know your name. Leo Gerard, United Steelworkers President, In These Times, 5-28-13.