No bills died this week. With appreciation to our friends and colleagues at Washington State Budget & Policy Center, the State League of Women Voters, and the State Low-Income Housing Alliance, here is a compendium of their budget analyses, which reflect our priorities, particularly for education and human services which are by far the largest part of the operating budget. We ask you also to support their recommended action steps as well as those of the WLIHA and the Budget & Policy Center, remembering that the budget bills will be voted out very soon.

A cutoff calendar is included at the end.

Analysis by the Washington State League of Women Voters:

On Friday the House Democrats released their proposed 2015-17 budget package, including how they plan to pay for it. There will be at least one public hearing on this package, on Monday; and then it is expected to pass the House and move to the Senate.

The Senate, in turn, will adopt its budget, which is expected to look quite different from what was released by the House. Then representatives of both caucuses in both houses of the Legislature will negotiate a final, compromise budget.

Speed is of the essence at this point. The Supreme Court’s anticipated review of the McCleary case compliance (ample state funding for education) on April 27 creates urgency for working rapidly toward a budget compromise. As you know, the state budget must be balanced.

Preliminary analysis of this House proposed budget indicates that it goes farther than the Governor’s budget did to fund basic education, including funding to reduce K-3 class sizes and to assure teachers get their cost of living adjustments and additional benefits. While the shortfall has been estimated at $4.5 billion for this biennium, the Governor proposed an increase of only $2.3 billion. The House budget has an increase of $3.2 billion. The House proposed paying for this by acknowledging new revenue generated by the improved economy, by initiating a capital gains tax, by closing some tax loopholes and by shifting the business and occupation tax rates. The Representatives sponsoring this proposal also spoke of the need to further increase state funding to address the local levies now paying for education but did not say how that would happen. For more information on the capital gains tax, follow this link. This new revenue source would affect only those with means, adding more fairness to the overall tax structure of Washington State.

The House budget proposal also would increase investment in early learning programs, in higher education and mental health, social services and other basic needs. The Governor’s proposed carbon pollution program was not included in the House proposal, but Representatives spoke to their interest in continuing to discuss that option (which League also supports).
Action Suggestions for this Week from the League of Women Voters:

Next week we’ll update you on where budget and policy matters stand in our customary format. Thanks for being BOLD advocates.

First tell your elected officials that you endorse the House budget!

The House budget protects vital services that help people with very low incomes who experience a disability keep their homes. It funds important programs that help homeless young people. And it invests over $110 million in affordable housing! That’s why we need you to urge your legislators to pass this budget out of the House.

The big news is that the capital budget contains $110,200,000 for affordable housing with $80 million specifically for the Housing Trust Fund! But there’s even more good news regarding the operating budget, with just one budget issue that we’re disappointed about. Check out our housing & homelessness analysis of the budgets!

The House budget released [this morning] recognizes that fixing our broken revenue system is necessary to make progress toward creating shared prosperity in Washington state (a message that was also detailed in the Progress Index we released earlier this week). The two-year spending proposal prioritizes investments for kids and students using $1.5 billion in new revenue. The House proposal makes sizable investments in early learning, makes college more affordable, and keeps the state on track to fully fund basic education for all children by 2018 (required in the McCleary court case). It does this while also protecting the health, safety, and well-being of Washingtonians. Investment highlights in the budget include: 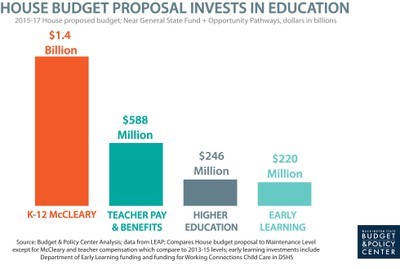 To make these important investments, lawmakers outlined the steps they intend to take to raise additional resources while also addressing our upside-down tax system. These include:

While no revenue is included in the budget proposal for capping and pricing carbon pollution, lawmakers have expressed interest in pursuing a proposal that would yield even more revenue.

Stay tuned to schmudget for more-detailed analysis on the budget and revenue proposals in the coming days.

To learn more about what state lawmakers can do to make progress in Washington State, read our Progress Index. And specifically, read more analysis on: