With her call to action, Warren cuts sharp contrast to Clinton 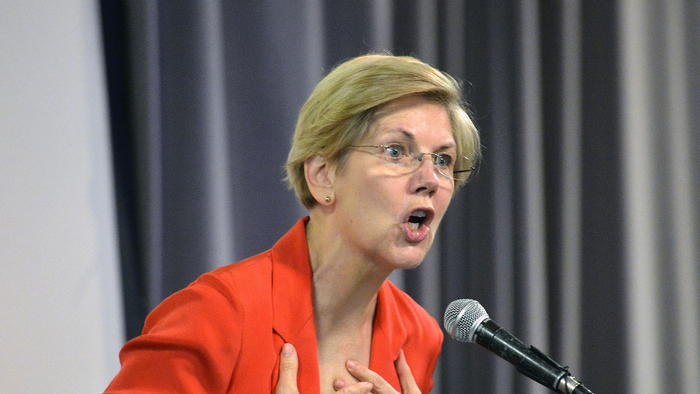 Democratic U.S. Sen. Elizabeth Warren of Massachusetts speaks to a group of supporters at a rally in June for Kentucky Democratic candidate Alison Lundergan Grimes.

As the 2016 presidential race approaches, Sen. Elizabeth Warren (D-MA) may be entering a different phase of her career—one in which she’s beating back lots of unwanted attention. On Friday morning in Detroit, a crowd of liberal activists roared, “Run, Liz, run! Run, Liz, run!” as she took the stage to address the Netroots Nation conference. “Sit down. Come on, let’s get started. Sit down,” Warren said, attempting to quiet the crowd with the tone of an appreciative schoolteacher. Warren, who has repeatedly said she will not run for president in 2016, laid out the broad outlines of her agenda—urging the activists in the audience to fight income inequality and take on wealthy and powerful interests who ensure that “every rule tilts in their favor,” while “everyone else just gets left behind.” Warren has highlighted those issues throughout her career, but the themes of her speech offered a striking contrast to recent appearances by Hillary Clinton, who will decide whether she is running for president by early next year. Clinton frequently talks about her concerns for the younger generation and their struggle to find jobs or pay for college. But she has yet to outline a fist-pumping cause or coherent argument that would define a run for president. Los Angeles Times, 7-18-14.