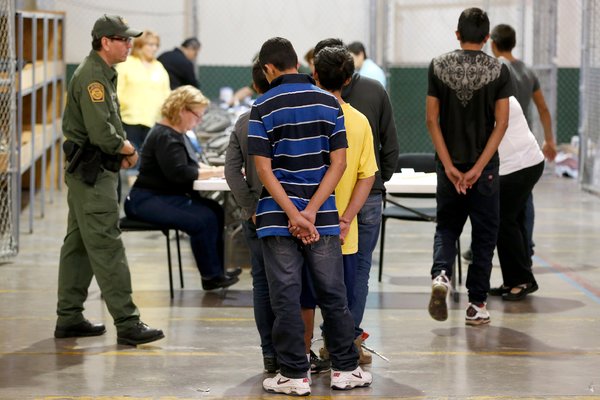 Boys waited to make phone calls in June at a United States Customs and Border Protection center in Nogales AZ.

It was one of the final pieces of legislation signed into law by President George W. Bush, a measure that passed without controversy, along with a pension bill and another one calling for national parks to be commemorated on quarters. It was called the William Wilberforce Trafficking Victims Protection Reauthorization Act of 2008, named for a 19th-century British abolitionist. Now the legislation, enacted quietly during the transition to the Obama administration, is at the root of the potentially calamitous flow of unaccompanied minors to the nation’s southern border. Originally pushed by a bipartisan coalition of lawmakers as well as by evangelical groups to combat sex trafficking, the bill gave substantial new protections to children entering the country alone who were not from Mexico or Canada by prohibiting them from being quickly sent back to their country of origin. Instead, it required that they be given an opportunity to appear at an immigration hearing and consult with an advocate, and it recommended that they have access to counsel. It also required that they be turned over to the care of the Department of Health and Human Services, and the agency was directed to place the minor “in the least restrictive setting that is in the best interest of the child” and to explore reuniting those children with family members. The Obama administration says the law is partly responsible for tying its hands in dealing with the current influx of children. New York Times, 7-7-14.